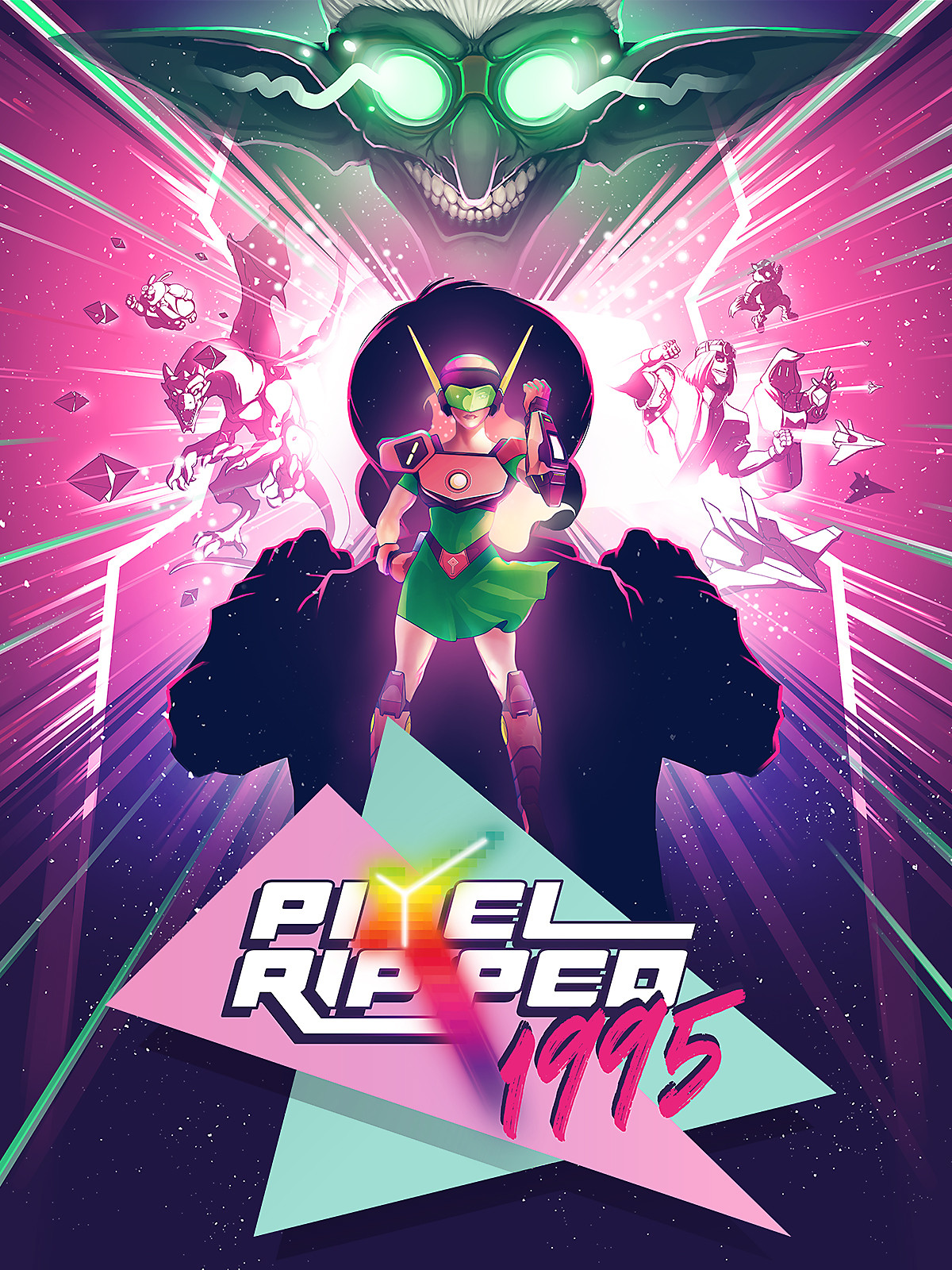 Two years ago, developers ARVORE concocted a virtual experience that brought players to the realm of 1989. Aptly titled Pixel Ripped 1989, the game was met with much critical acclaim, winning many awards all over the world. Seeing if lightning can strike in the same place twice, ARVORE has spawned a sequel that takes place a few years down the line. Does Pixel Ripped 1995 deliver the same amount of magic its predecessor, or does it have too much dust inside its cartridge?

Pixel Ripped 1995 takes place in two worlds: the real world and the world of video game hero Dot. Players control both Dot and the nine year-old David playing her video game, as you bounce between the worlds. As Dot is slaying demons and monsters, David is dealing with an overtly-protective mom who thinks video games are a bad influence on her child. This causes the mom to interrupt David’s gameplay, resulting in the game being shut off here and there. (Fortunately, David’s got a cool and understanding dad, who lets him play to his heart’s content.) 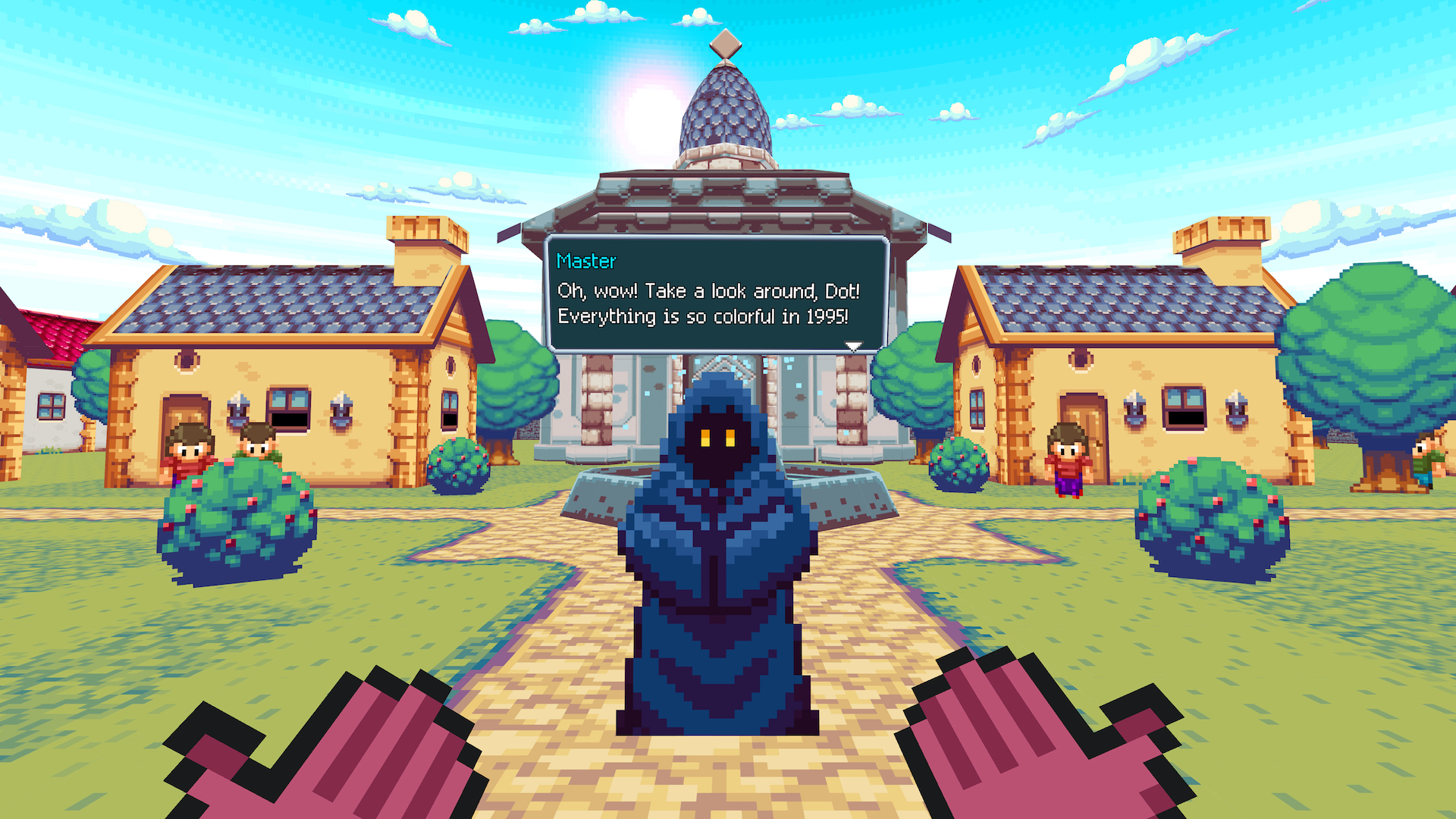 However, a strange occurrence happens when Dot’s world invades not only David’s world, but the world of other video games. In order to save her world, Dot must entrust David with helping her via interfering in boss battles or collecting objects from other games and placing them into her hands. Will David save Dot’s world in time, or will his mom literally pull the plug on the whole rescue mission?

ARVORE’s sequel is chock filled with great jokes and meta humor about 90s gaming, be it making fun of certain genres or even the lingo of that era. The references that flew in my face made me smile like a doting idiot, as it reminded me a lot of how I used to play my Sega Genesis back in the day. While my parents were fine with my gameplaying habits, I can sort of relate to David’s frustrations when he overhears every debunked myth about how bad video games are sputtered from his mom’s mouth. As such, there’s a great nostalgia that’s within Pixel Ripped 1995’s essence. 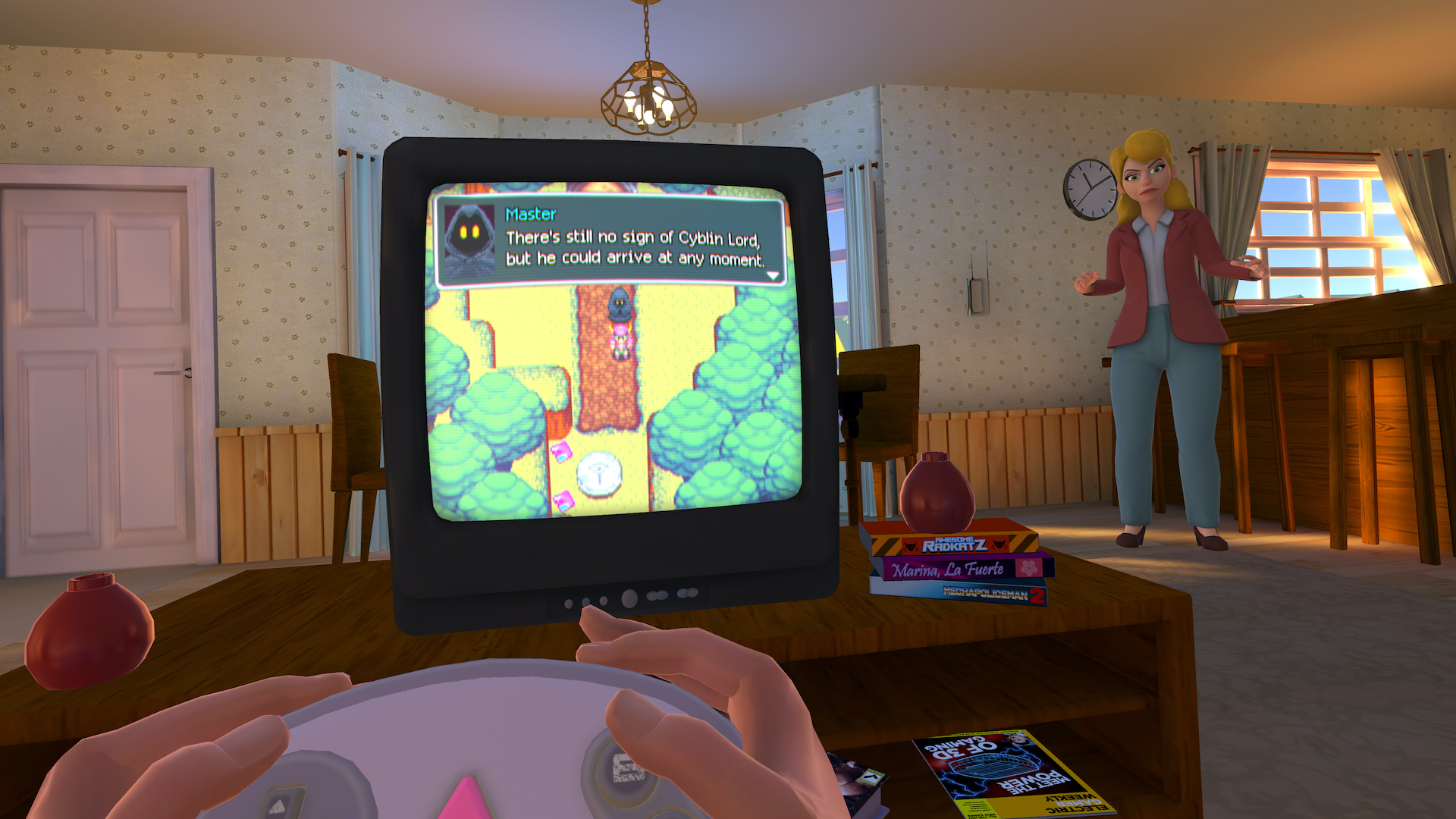 One of the fun things about this game is how many genres of games it shoves lovingly into your fingertips. From top-down adventures and side-scrolling Metroidvanias to shoot-em-ups and — yes — even virtual reality, ARVORE has placed a lot of care and love into every genre it pays homage to. This mixture even plays out simultaneously, as David will sometimes have to play two games at once in order to reach the goal at hand. However, it does come with a price: its control scheme.

Using the PlayStation Move as hands, players will hold their controller, toy gun, or any other close-at-range item to interact with it. At first, it’s a really cool idea, and it works well for the most part. Unfortunately, with the Move not having a traditional stick to move around, games will have to use the four front buttons on the left Move controller to maneuver traditionally. This causes huge problems during gameplay, resulting in easy-to-make mistakes while controlling Dot in-game and in the real world. 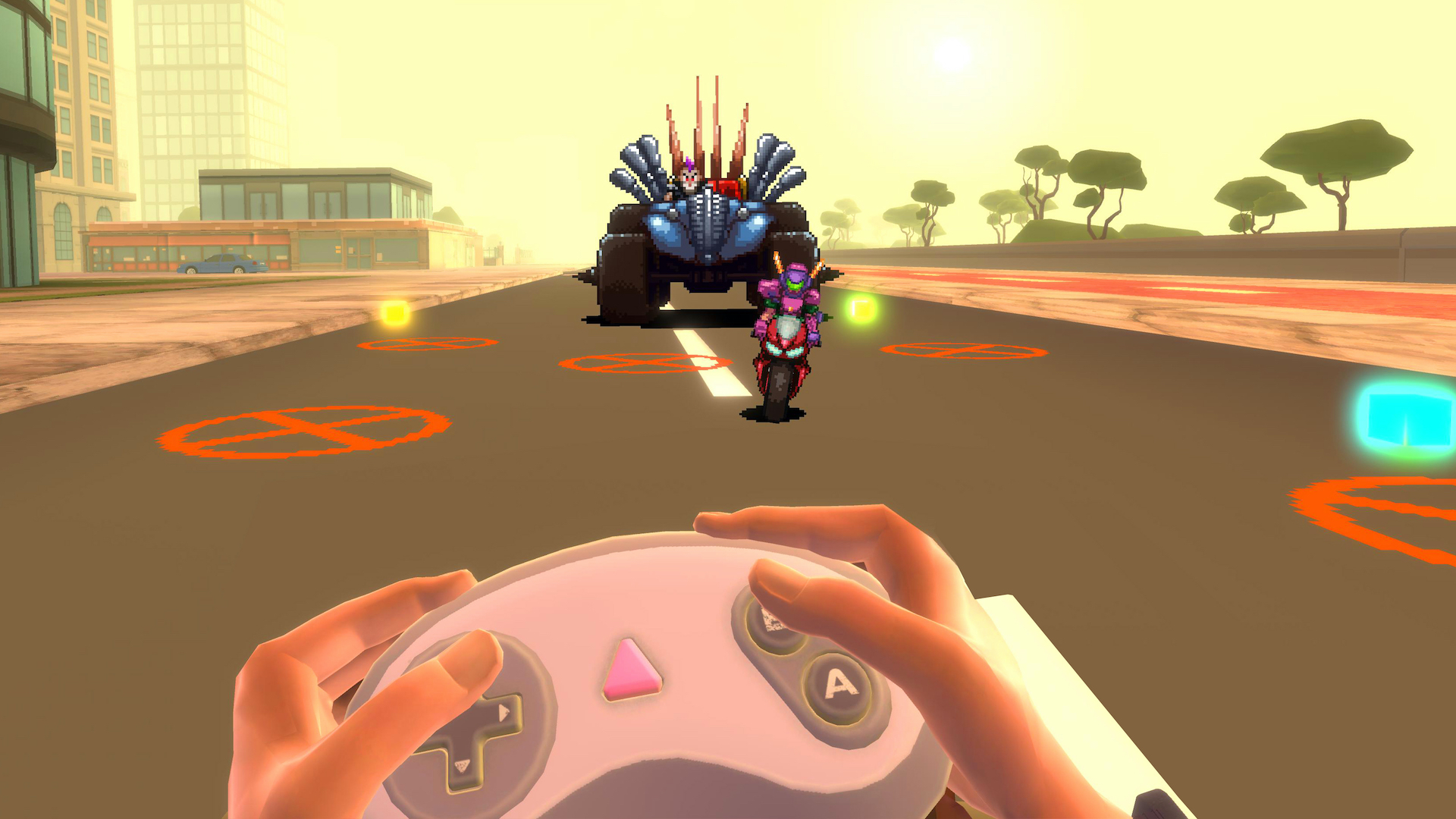 As the button layout isn’t shaped in a plus sign, it results in a lot of awkward moving around when maneuvering Dot. Too many times I walked into walls or traps, and even died over and over again because it was so hard to move around. While not the fault of ARVORE (who also made the game for Oculus, which does have traditional stick controls), it still would’ve been better if an alternative control layout was made so I could play with my DualShock 4. I get that it’s all about creating immersion, but the pain I was feeling in my fingertips kept taking me out of the experience.

One other thing that was sort of frustrating was how often I had to readjust my view. Although it’s a quick fix, the fact that I had to keep on doing it over and over again was somewhat frustrating. Even more bothersome was when the game decided to let my head float away from my body, without any way of fixing the issue. Most of my time playing Chapters 3 & 4 had me twisting my neck and spine to get into the right position, something that my body will probably hate me for these next couple of days. (My masseuse will be grateful, at least!) 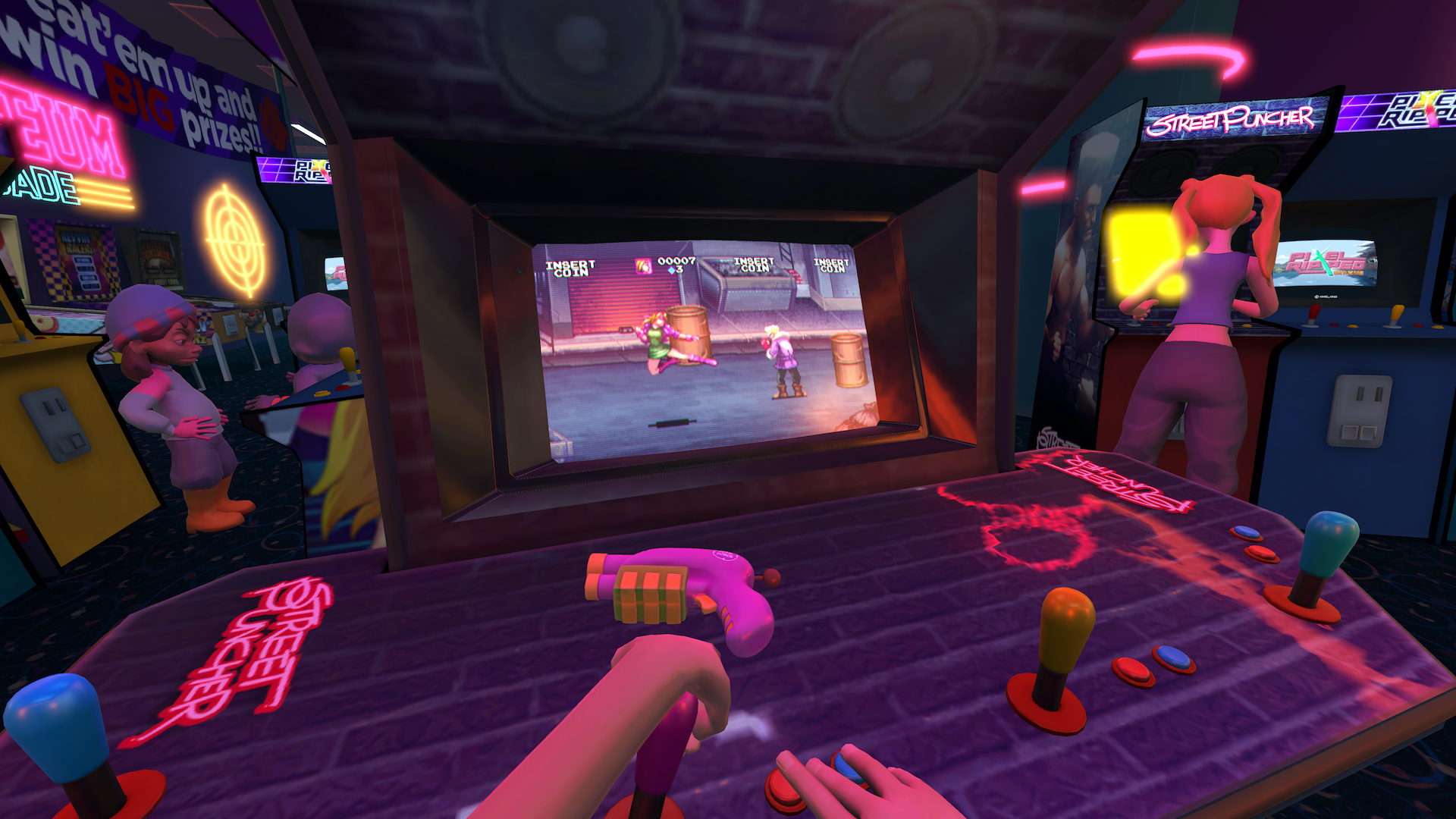 With all of that being said, Pixel Ripped 1995 does enough good to make dealing with these gripes worthwhile. Throughout its four-hour runtime, you’ll be treated to some fantastic nods of game’s past, as well as have an appreciation for the era that gave us so much to enjoy. Yes, your body may be sore after experiencing ARVORE’s sequel, but at least your eyes and brain will be happy from all the silly joy this game delivered.

Despite some rough controls and VR-based bugs, Pixel Ripped 1995 delivers a fine tribute to gaming’s past. The humor is lovely, and the mixture of various types of game genres makes the whole experience worth thousands of zit-faced smiles. Just be sure not to twist your body too much while playing, as your chiropractor will more than likely charge you an arm & a leg to put you back together again.

IMPRESSIONS | "The Legend of...