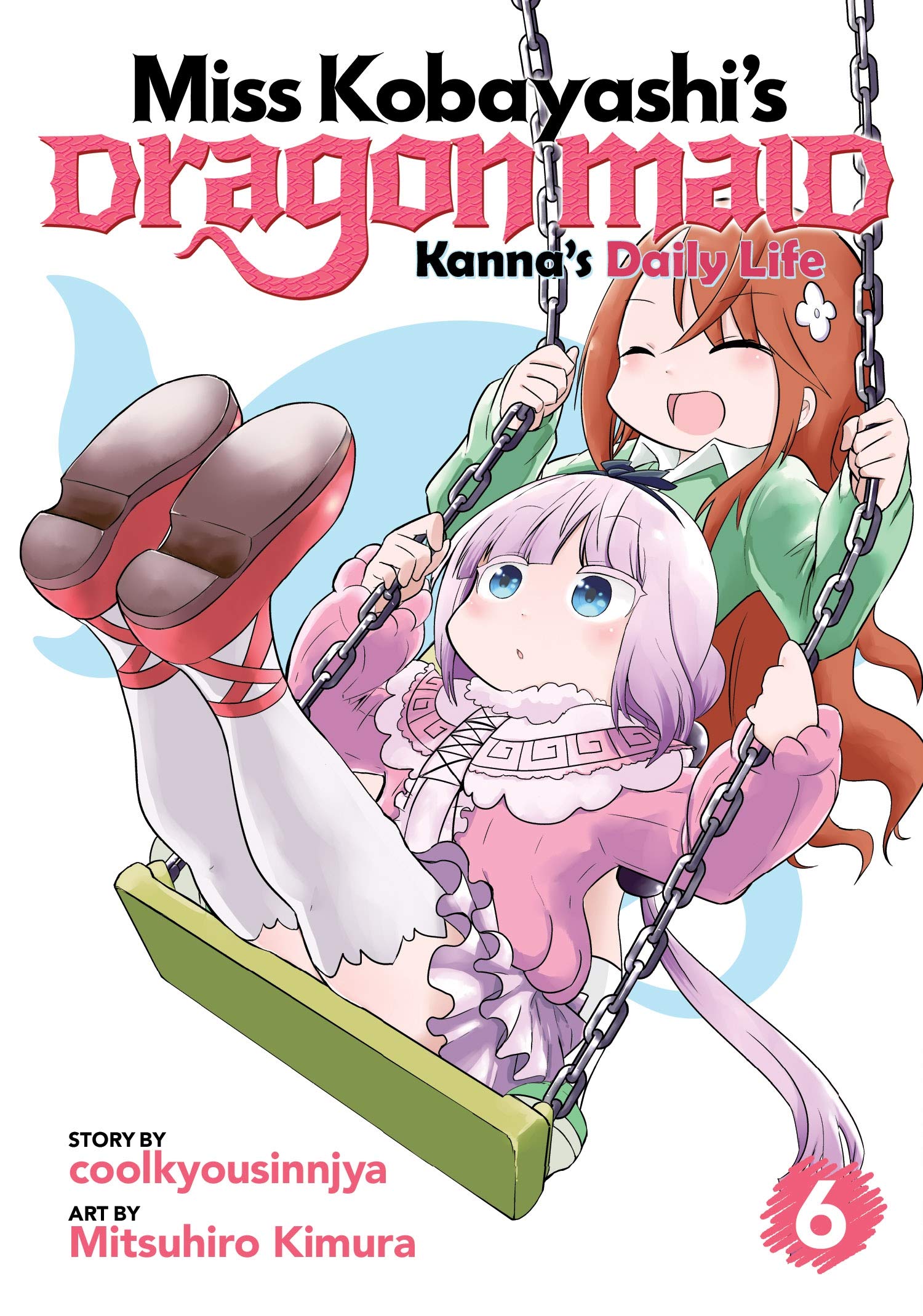 The possibilities have been endless when it comes to Kanna’s Daily Life, Mitsuhiro Kimura’s spinoff of coolkyousinnjya’s Miss Kobayashi’s Dragon Maid. Placing focus on the smol dragon girl and her lovey-dovey friend Saikawa, the series has delivered an abundance of both cuteness and hilarity. However, as evident by its sixth volume, it may appear that those possibilities — not to mention plot ideas — are starting to dry up.

Kanna expands her knowledge on the human world, as she picks up reading about history and participating in class cooking. An illness sidelines Saikawa, with Kanna visiting and seeing her sister Georgie outside of her maid cosplay. Meanwhile, the idea of showing Saikawa her home world grows in Kanna’s brain, as she attempts to find something on Earth that equates to the beauty she used to see on a regular basis.

One of the strongest aspects of this particular collection of stories is how the entire Dragon Maid cast participates in Kanna’s adventures. From Miss Kobayashi trying to get fit to Tohru and Elma battling it out with some ice skating, the way all these characters interact with one another feels very much aligned with what would happen in the main series. One of the best stories involves Kanna and Saikawa running a school marathon, where a naked Lucoa and Fafnir in his original form make trouble for the Lolita-fashioned dragon child. (It’s also interesting to point out that this may very well be the first time we see Fafnir’s true dragon form, outside of the original anime’s opening credits.)

However, despite some of the stronger elements of Kanna’s Daily Life, it doesn’t have that same level of quality that past volumes had. I was taken aback by how Kimura’s art style has seemingly regressed, with the once-anime-styled designs turning into something that looks like second-rate DeviantArt visuals. They’re not terrible per se, but they appear to lack the heart and personality that the previous collections have had.

Although there are some good laughs in the volume, a good chunk of the storytelling elements were more paint-by-numbers than clever. I understand that this spinoff is a good excuse to showcase Kanna doing cute things, but they’ve always done it with a mixture of creativity. Here, stories involving spilling the school curry and taking on Ilulu in a cooking contest just don’t have the same flare of sweetness and chuckles. (The fact that they did the latter story already with Kobayashi & Tohru in the main series also doesn’t help with that.)

When the focus is on everyone from the Dragon Maid lore, Kanna’s Daily Life is at its finest form. Sadly, unlike previous volumes, the ones solely about Kanna and Saikawa feel a bit lacking with the warmth and charm we’ve gotten used to. Perhaps Kimura has hit a snag in her story-writing techniques, which happens to a lot of writers. My hope is that she gets a little help from coolkyousinnjya when it comes time for more Kanna’s Daily Life adventures.