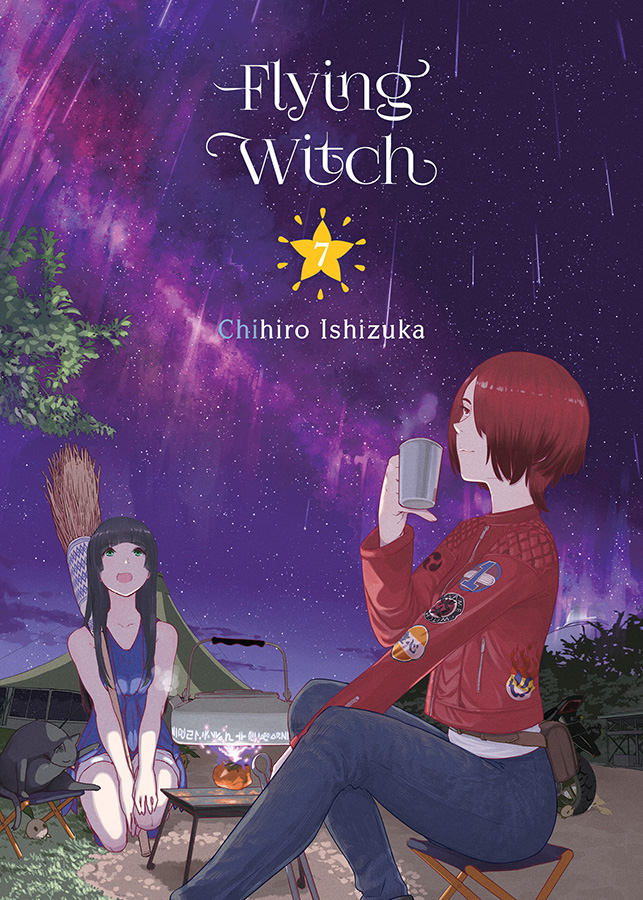 It’s been well over a year since Makoto and the rest of the gang of Flying Witch were last seen in the US manga realm. Now after a very long wait, the seventh volume of Chihiro Ishizuka’s series has arrived to remind readers of the magic of both witchcraft and of the world around us. Needless to say, the spells and charms of Flying Witch are just as strong as ever.

A good focus is placed on older sister Akane, who now finds herself getting cozy with the country surroundings of Aomori. However a trip to China has her seeking a cure for Inukai’s curse, which results in her having to globe hop in the blink of an eye. Meanwhile the Harbinger of Summer finds himself taking up a part-time job, while delivering Makoto and the gang a candy treat that’s as rich in taste as it is in, well, price! But when a news crew gets wind of the strange happenings going on, Makoto and Akira find a way to keep the witch stuff quiet thanks to something known as The Rabbit Rule.

One part of Flying Witch’s greatest strengths is its atmosphere, which is captured beautifully in Ishizuka’s art style. The sights of China, Japan, and even the frozen tundra of Antarctica are brought to life not just with great detail, but also with a calming sort of care. You look at these areas, and instantly you’ll feel a deep relaxing sigh as if you’re there yourself taking in these great sights. Very rarely does a manga bring out a visual style that’s both gorgeous and calming, and Ishizuka manages to deliver just that with a stroke of her pen.

However, this volume also demonstrates the writer’s knack for comedy. The chapter involving the news crew and The Rabbit Rule delivers some of the series’ best slapstick moments, with Murphy’s Law going deep into effect for the sake of the witches’ anonymity. Akane’s quest for a curse-breaking potion results in a very Looney Tunes-inspired moment of panic, giving way to some of her carefree attitude while practically facing off against death. And while she’s given the curse-breaking potion, Inukai soon finds out that she might not be able to use it immediately due to...let’s call it “family issues.”

Volume Seven of Flying Witch may have been a long time coming, but it delivers everything that has made this series an absolute delight. Thanks to its great characters, magic-induced storytelling, and even its beautiful art, Ishizuka’s tale of a witch’s growth journey continues to be one of manga’s best and brightest slice-of-life series this decade. And now for the hard part: waiting for 2020 to come along so Volume Eight can get here!