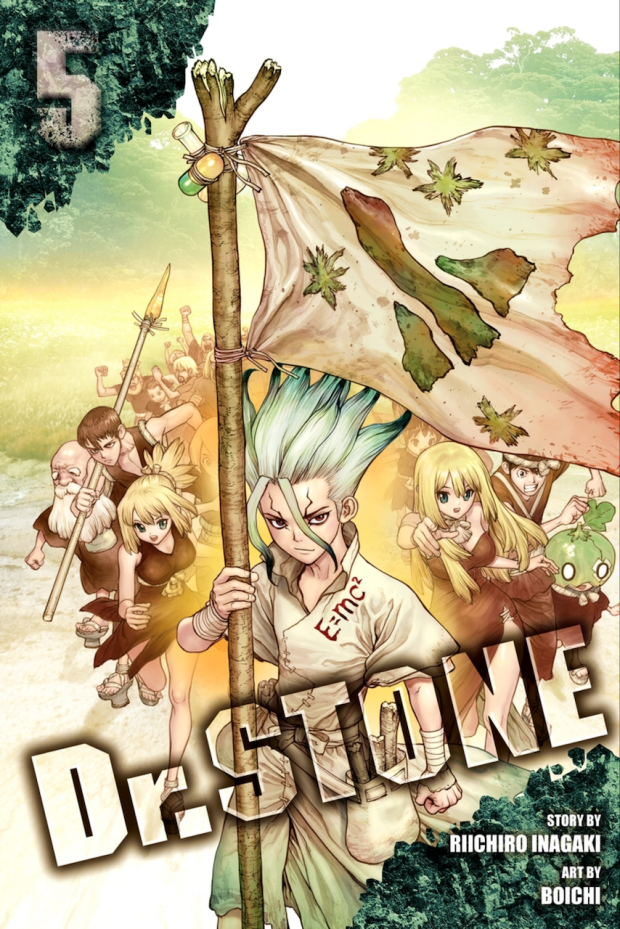 The level of sheer genius that both Riichiro Inagaki and BOICHI have reached with Dr. STONE has gone beyond any sort of expectations. In one instance, you’ll be cheering on Senku and the gang after every moment of scientific breakthrough; in the next, you’ll be laughing your ass off thanks to visuals that defy even the most popular of gag manga. Even as science takes a back seat for some shonen-styled action, Dr. STONE still knows how to give its readers one wow factor after another. This is clearly evident in its fifth volume, where some of the mysteries behind that dark phenomenon are slowly beginning to unravel.

A tournament is being held for both the title of village chief and the hand of village shamaness Ruri, who is ill due to a mysterious illness. Senku, Chrome, Kohaku, and Ginro enter the tournament to keep the brute Magma from winning, as well as obtain some alcohol that’ll create medicine. With the peace of the village on the line, the four friends attempt to gain the victory in order to save Ruri from a few troubling fates. But as things look to calm down, Senku discovers how much deeper he might be tied to Ishigami Village. 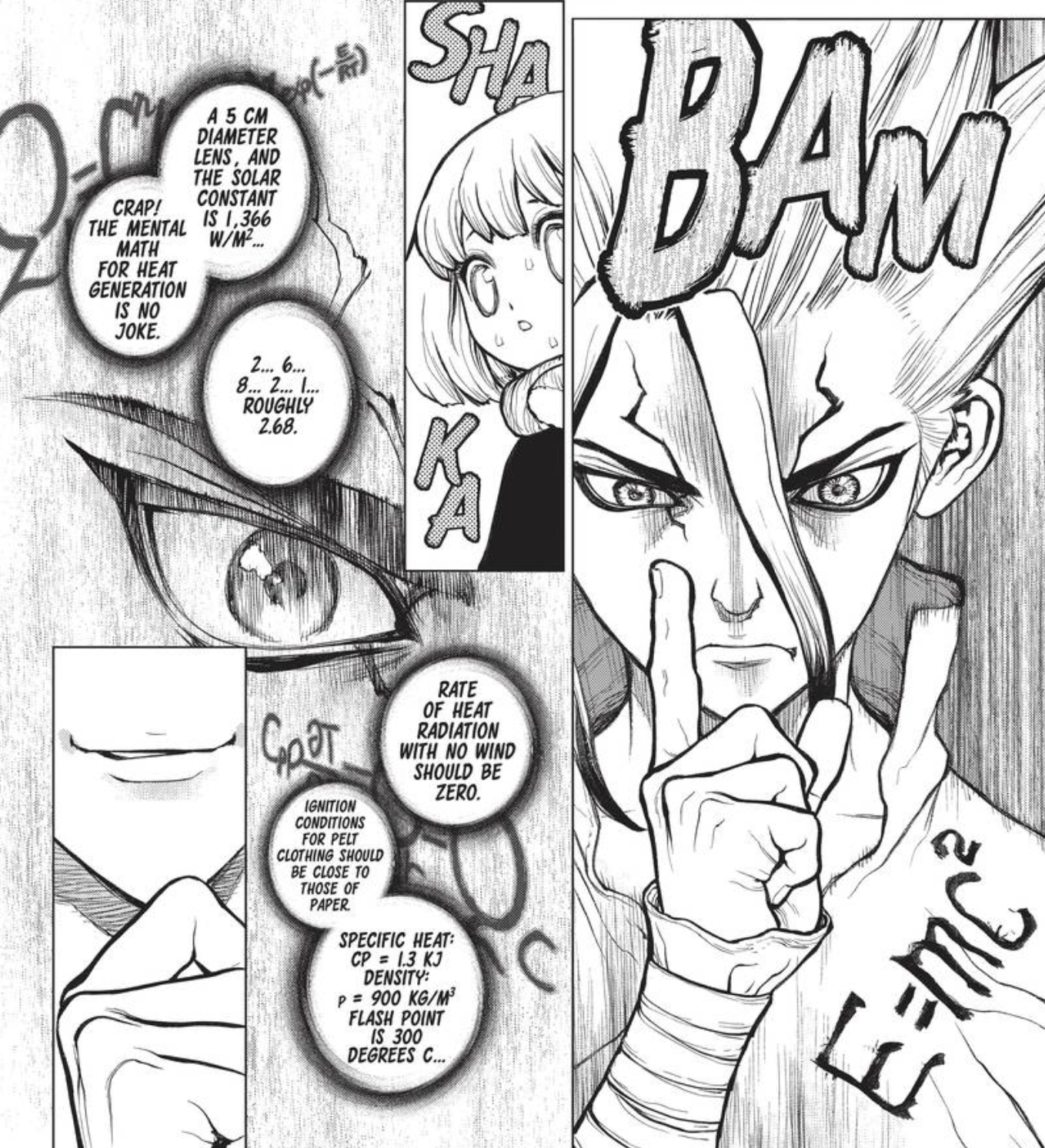 Inagaki knows how to create tension when a battle is about to begin, as evident in his work with Eyeshield 21. Here with Dr. STONE, the concept of a one-on-one brawl is demonstrated with such care and strategy. As science is the main focus on this series, many ways are discovered to use brains to defeat brawn. With the usage of Suika’s new seeing-eye helmet, the victories and defeats that are shown give off levels of sharp intelligence and sleek attitude. This may be a shonen manga, but it’s the kind that even a Harvard Ivy League science professor would have a hard time not cracking a smile for.

Of course, even during the high-stakes tournament, there’s always a way for some laughs to come about. Combining BOICHI’s art skills with Inagaki’s funny bone, the visuals and gags that come out of the tournament are hard not to find yourself rolling over giggling. A great example of this is when readers see Ginro’s fantasy fight mentality with the beaten-with-an-ugly-stick reality that’s actually happening in the scene. Even something seen often in anime/manga humor like comical vomiting is showcased with both gross and hilarious detail. (Seriously, why are all the villagers eating fish bones?!) 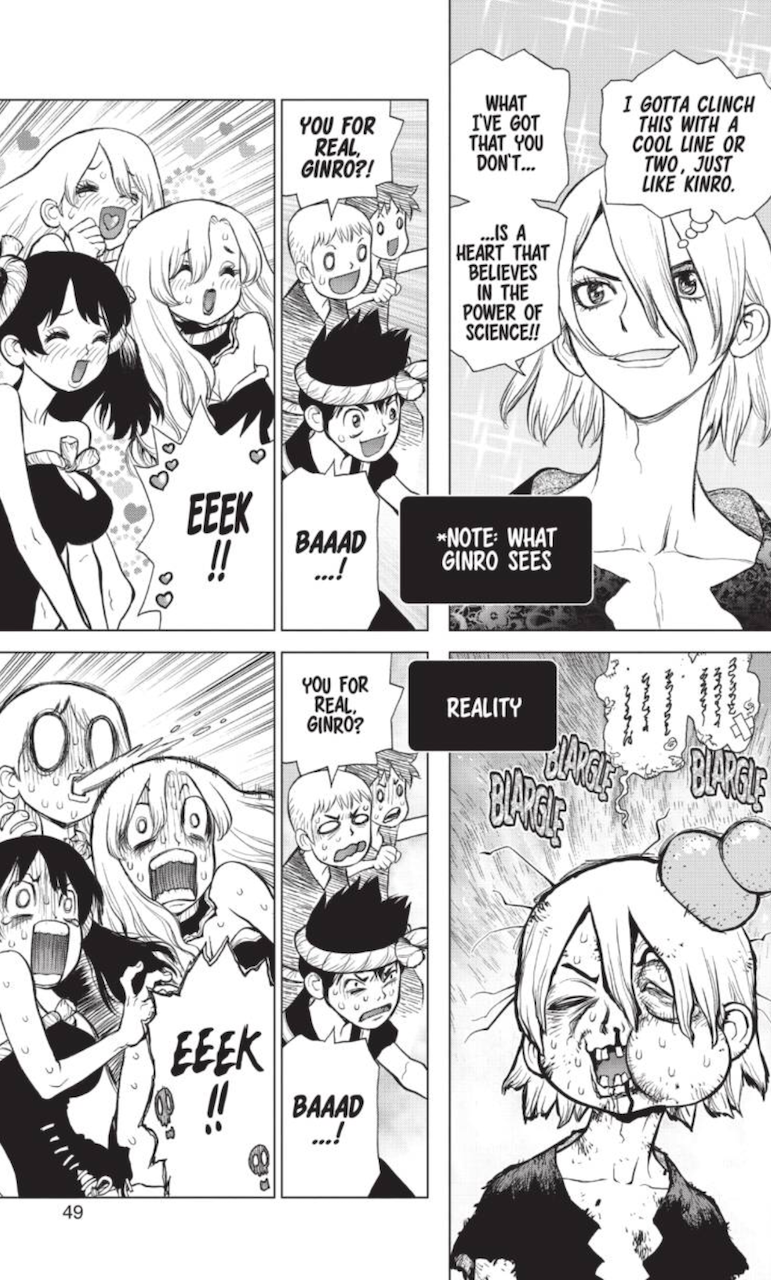 Once the tournament ends, and the race to save Ruri nears its finish, that’s when some new details emerge. When Senku’s last name is fully revealed, that’s when some of the pieces of the puzzle are starting to be put into place. A flashback involving Senku’s father cements this fact, and while I don’t want to spoil it here, it does make you want to revisit the previous volumes and see how everything connects.

Dr. STONE never slows down in either the fun or educational department, and Volume Five of the series showcases why this is one of this decade’s best series. With a little action and some fist-pumping moments of victory in scientific breakthrough, Senku’s tale continues to bring forth a level of deep excitement at every turn. With the big reveal about the village’s origins and founder at the end, it’s becoming clear that Inagaki & BOICHI show no signs of taking a breather with its storytelling. With the anime adaptation premiering next month, it’s clear right now that Dr. STONE is one series no manga or anime fan should dare miss out on! 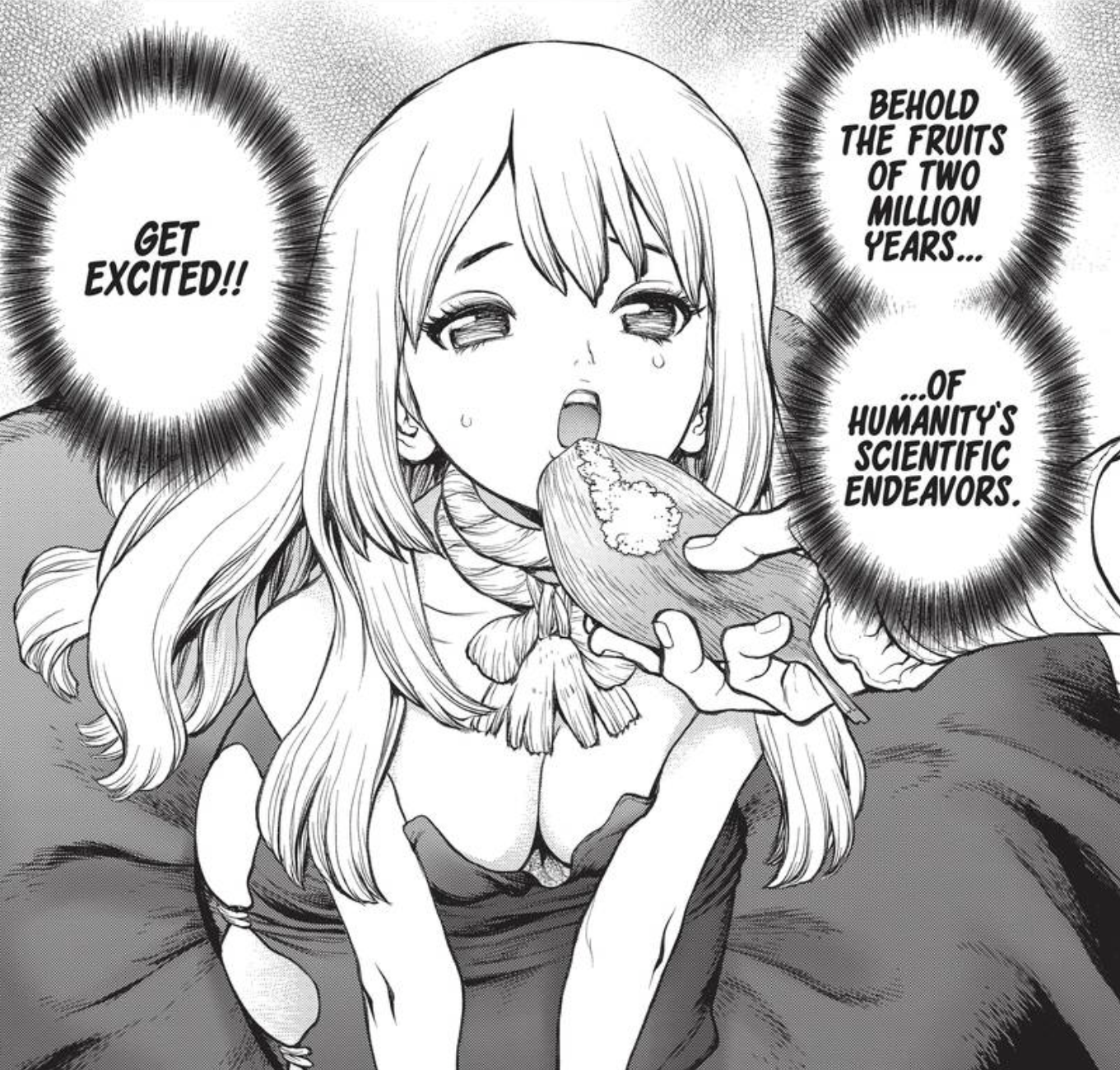