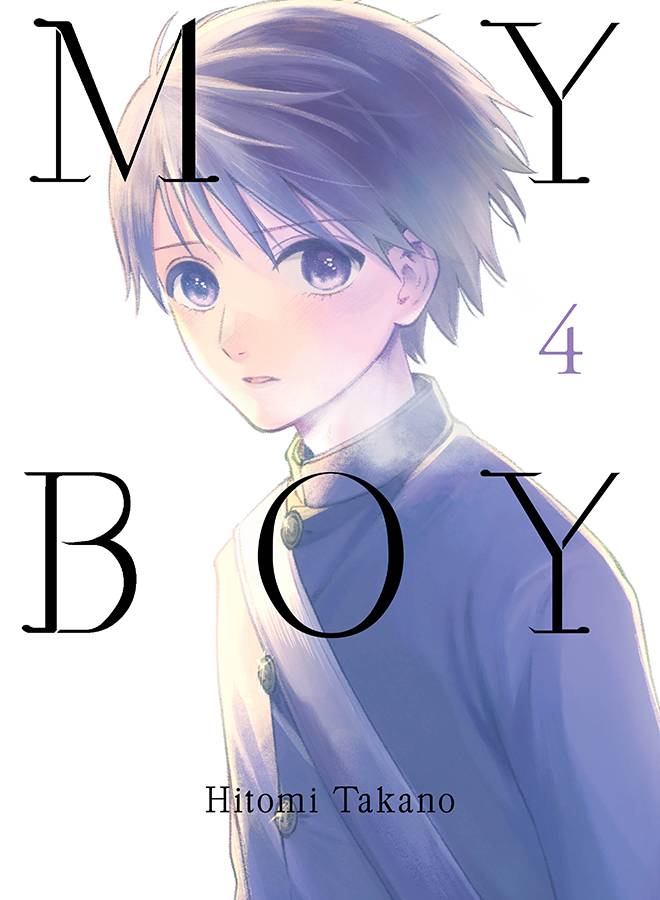 Even after reading four volumes of Hitomi Takano’s My Boy, I still can’t quite figure out how I feel about its overall story. On one hand, the tale of Satoko’s guardian-like relationship towards the young kid Mashuu has its sweeter moments. However, it’s very apparent that Takano is trying to push these two together to become something more than just friends. That mentality is pushed greatly in its fourth volume, although how it handles it is surprisingly good.

Two years have passed since Satoko was transferred to Sendai. But a chance meeting with Mashuu while on a school trip has un-bottled a plethora of emotions. Mashuu wishes to stay in contact, but a feeling of nervousness takes over both he and Satoko as they try to convey the right words to one another. As a seemingly mended friendship becomes stronger again, something deep in the gut of both Mashuu and Satoko leaves them worried and frustrated.

For the first time, My Boy showcases the story through Mashuu’s perception. Takano fortunately is able to present the right amount of character detail and emotion through Mashuu, as he juggles school, home life, and his recent run-in with Satoko. He’s of course confused and excited, but at the same time an air of worry circles around him as he waits to see if Satoko accepts his LINE friend request. How he’s represented in these situations is done with the right amount of teenage angst and a certain amount of puppy-like want for attention. It has this cute side of him constantly looking at his phone, but it also demonstrates a level of desperation for a feeling he doesn’t naturally get enough of.

A chapter revolving around Ogata and her means of helping friends winds up being a surprising highlight of this volume. The way she feels guilty by giving people advice that’s not her own is somewhat humanistic, despite her good intentions. Perhaps this is why I found myself loving the fact that she breaks through when trying to help Mashuu by giving her own set of advice rather than something from a radio host. In a way, it helps to evolve her character via a means that I hope is pushed more as the story progresses.

However, I once again get this unsettling notion about the relationship between Mashuu and Satoko as this volume wound down. There is a big part of me that’s really hoping it’s not going towards an unwelcoming route between the two of them. I know I might be repeating myself from my past reviews of My Boy, but these characters are far too well-rounded to be pushed towards a scenario that I’m sure many readers would greatly frown upon. Hopefully I will be proven wrong, and that the story goes back to the sort of watchful eye-like relationship Satoko and Mashuu had early on.

Volume Four of My Boy was a very good experiment to see how the narrative would take to a new perspective. Despite some of my initial worries, Takano manages to provide a very humanistic means of telling a solid story. With that being said, I do hope she is not taking any sort of advice from her shota-loving manager she often mentions in the manga’s afterword sections.

ANIME/FILM REVIEW | A Rush To Save...