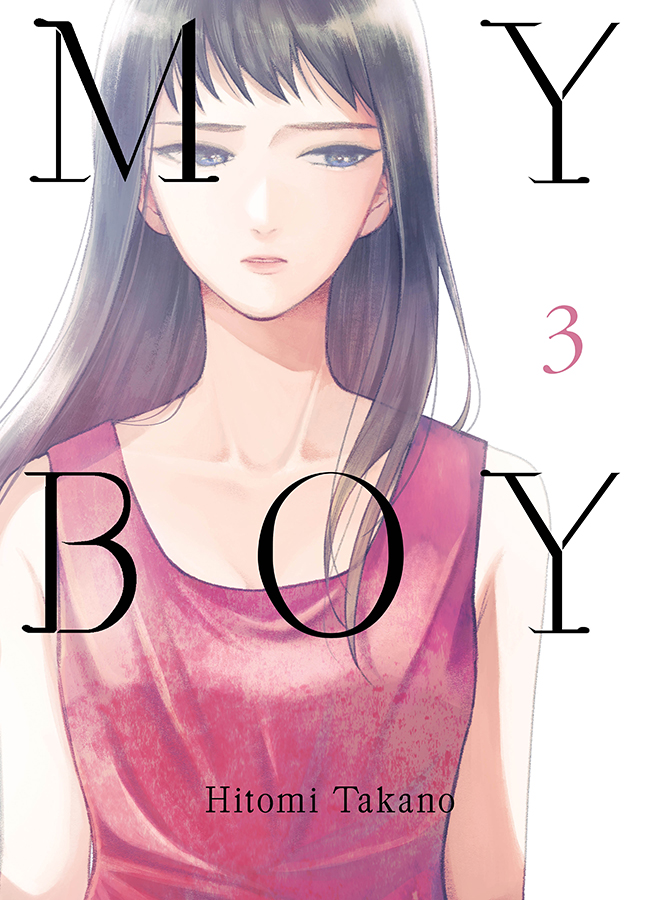 Hitomi Takano's My Boy has left me feeling weird in places soon after reading each volume. The story of Satoko and her friendship with the young boy Mashuu has had me wondering what the author's true intentions have been with these two characters. Is she attempting a simple friendship between the two, a mother/son-like bond, or...I don't even wanna type the worst-case scenario that it could lead to. Thankfully, in its third volume, one other person has been wondering about this relationship: Mashuu's father.

After comforting Mashuu, who has quit his soccer team, Satoko comes face-to-face with his dad. Like a good father, he questions Satoko on why she has been hanging out with him, leaving her nervous over what to say and how to present herself. Though the tension seems to ease off after the dad approves Sakoto's teaching habits, she winds up in more trouble when he finds out some certain hangouts he wasn't informed of. Not only does this put Mashuu's practice regimen in jeopardy, but also Sakoto's job, as the father has dealings with the company she works for.

This is the moment where the shoe finally drops on Sakoto. Despite her intentions being well-merited, there was always a strange tone that surrounding the meet-up's between her and Mashuu. Throwing the father into the story certainly helps to cool any sort of unwanted flames My Boy may unintentionally spark. It also gives Sakoto a deep understanding about the concept of doing the right thing, even though the act of it may seem off-kilter to the sight & minds of many folks. Surprisingly, it's when the series throws a curveball when it showcases the change it most definitely needs: its scenery.

Watching Sakoto being transferred to Sendai, far from her past issues and even Mashuu, gave way to some much-needed character development for the manga's protagonist. She's conversing with friends, reuniting with past classmates, and even doing everything she can to have a new perspective on life itself. But like any person, something lingers inside of her, wishing she could go back to the things were. All of this is presented in a very sympathetic light, in ways that have made Sakoto a more well-rounded character as a whole. It's the last couple of panels that throws a bit of hope into her life, giving way to a situation that Takano leaves up for readers' interpretations until the next volume comes around.

There are bound to be repercussions for awkward behaviors, even if it's out of the goodness of one's heart. The third volume of My Boy demonstrates this fact with much care and concern, to the point where -- for once -- I can genuinely understand where Satoko is coming from. Although there are some bumps on this road that remained from the previous volumes, the tone and mentality has evolved greatly in a way that makes Satoko and her friendship with Mashuu relatable. However, considering how things are left in this volume's final pages, My Boy may be taking another turn with its narrative, for better or worse.