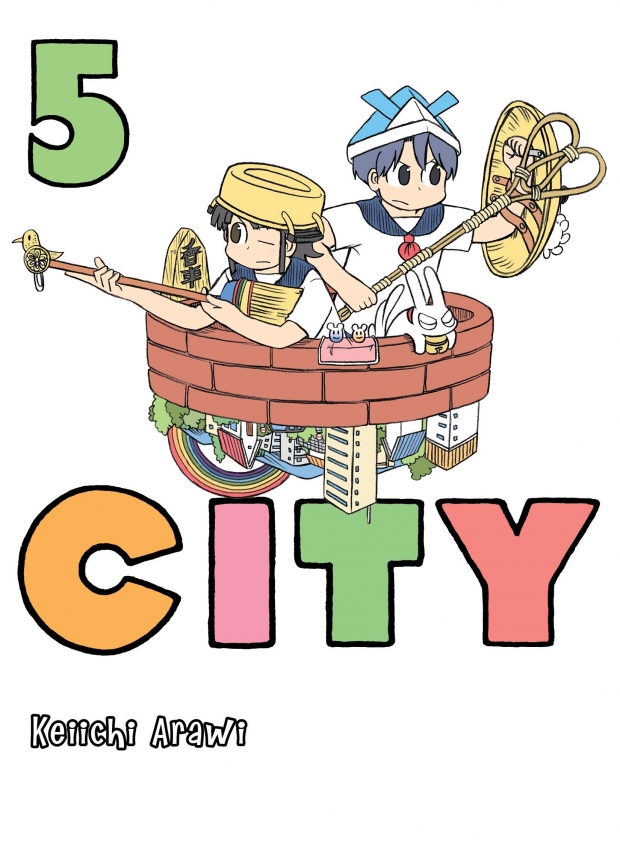 Despite his tactics to bring forth nonstop absurdity, Keiichi Arawi always manages to add a bit of humanism into his works. Yes, it can get very goofy in his current series CITY, but it's finding that level of relatable reflection within these characters that makes every aspect of it feel so endearing. The concepts of love, conquest, friendship, and even world peace are presented in such wacky beams of joy-inducing light on every page of his works. This is very apparent in the fifth volume of CITY, which aims to take on even the matters of life & death into its crazed realm.

Lazy afternoons and late days off are on the menu in this volume of CITY, where Niikura aims to take a photo of Nagumo in a promiscuous situation. Meanwhile Ms. Amara oversleeps on her day off, with her plans towards perfecting it being rushed in a messily way. While this is going on, a new comic to rival Kama Oni's Mr. Bummer appears at the CITY newspaper, all the while Death attempts to cash in on two of the town's residents. But there's always hope to be found just by wishing on a shooting star, or via placing a major bet on a horse race.

Where Volume Four presented one long story surrounding the entire population, the fifth volume returns CITY back to its short story routes. It's in these little tidbits where Arawi can flesh out these characters and worlds even more-so, despite them all brimming with personality right out of the gate. And yet, every time we reunite with a character in this series, we discover something new about them. Whether it's the reason behind Tsurubishi prancing Gramps or Nobuaki's means of putting on guerrilla plays, there's always something very warm and funny to be unveiled in these tales.

There are two chapters in this comic where character development shines the most, one of which lacks any dialogue whatsoever. The first, "Riko Izumi's Close Calls," demonstrates the character's means of always being a step ahead of a crisis, while at the same time swooning every man & woman who experiences these happenings. The deepness of her mindset as she almost falls down the stairs or drops a morsel of takoyaki presents her as a person who thinks deeply about all things around her, to the point where she finds a way to humanize even a fried octopus ball.

It's in the last chapter, "CITY Gold Cup," where just about everyone's emotions are running wild with insane hilarity. With the town seemingly all betting on the same dark horse, how everyone reacts during this race (which is never seen, only heard via commentary) reaches true laugh-out-loud moments. While I don't wish to spoil any of the chapter's multiple punchlines, what is presented here is true trademark Arawi-styled humor at its very best.

CITY continues to be one treat for the eyes and mind, with both verbal and visual gags all landing their marks with flying colors. Always silly to the final page, the latest volume hits its jokes more faster than a bunch of soccer balls smacking a dazed-out observer. It's clever, funny, relatable, and -- above all -- entertaining in every sense. If this latest edition of CITY fails to give you a shlooping feeling, then you may need to have your funny bone checked.