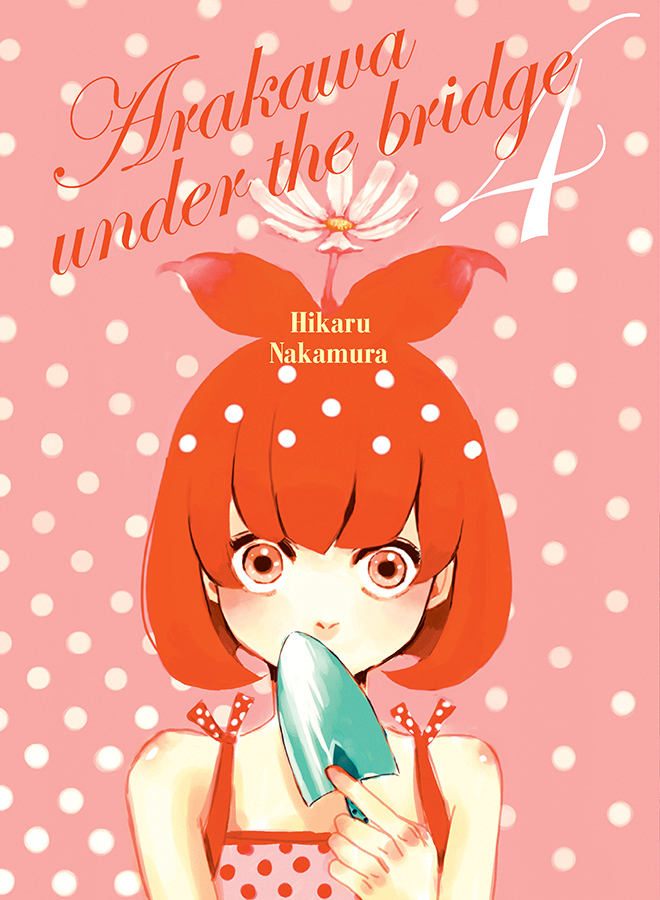 Hikaru Nakamura's Arakawa Under the Bridge always knows how to find the perfect balance between surprisingly heartfelt and off-the-wall insane. With its foray of strange residents ranging from a Venusian to kappa, the amount of crazy that's placed into each chapter would have any other series legally institutionalized. But the endearing soul of this manga is what keeps it from going too far off the rails, as evident in the fourth volume (which collects volumes 7 & 8 of the original series).

After deciding to fly to Venus, the residents of the Arakawa River find themselves training for the journey. This includes staying underground for a week with only the company of your peers as your means of sanity, as well as building an underwater station to practice the craft on their hopefully new homeland. Of course, a new face in the form of the Amazoness tries to shift her way into Recruit's heart, with Nino trying her best to keep him by even as a trio of tengu sirens attempts to hypnotize him. Meanwhile, outside sources continue to keep a close eye on the residents, with one peering mystery man seemingly having something to do with Nino's past.

While there's a decent amount of deep philosophy presented via these characters, the heart kind of takes a bit of a back seat for this volume of Arakawa Under the Bridge. As such, the loonier aspects take the wheel of the majority of this manga installment, thereby crafting stories that are crazy for the sake of being crazy. Because of this, some of the storytelling aspects in this volume tend to feel more overwhelming with meaningless stupidity than in the past. Even though what is happening is funny, I can't help but feel like they go one step too far off the deep end of sanity and into something that this series wasn't meant to be: one filled with cuckoo nonsense.

Newcomer Amazoness doesn't really help much with finding some sort of sane ground, as her appearance feels more like a romantic folly for Nino to hold a grudge against. Normally, characters in this series have a lot more depth in their style and personality, but Amazoness just feels way too one-noted to be considered a good-enough addition to the already overflowing cast. Even though her so-called "treasure" wound up being an interesting twist, it feels like that reveal could've been used on one of the already-existing residents of Arakawa River.

However, there are some surprisingly good strengths in this volume, especially with the return of the manga writer. Somewhat parodying Nakamura herself, he winds up serializing a new story based on Recruit, Nino, Mayor, and the rest of the people. When it shockingly becomes a hit, it's their reaction to seeing people cosplaying as themselves that make the fan/original character interaction all the more funny. Watching Recruit direct a film written by P-Ko also has its great and silly moments, especially when the residents watch the final cut of the film.

Although this volume of Arakawa Under the Bridge lacks a bit of the heart that has made the series great, it still contains enough of the spirit and strong funny bone that's made it an enjoyable read. Whether or not these insane individuals will success in reaching Venus remains to be seen (probably not, but there's the fun in believing in that possibility, dammit!), but the journey towards that goal continues to have a good amount of joy intact. One can only hope that the heart of the series will return next time around, as the loonier parts of this chapter in Arakawa Under the Bridge's serial proved to be exhausting at times.