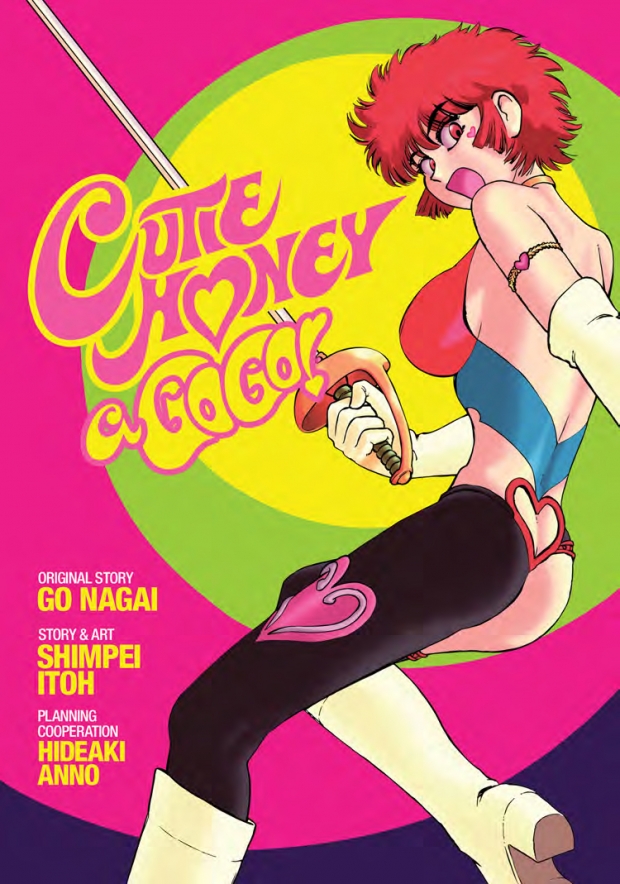 It's a team-up of two of the most famous names in both the anime and manga realm: the iconic Go Nagai (Devilman, Mazinger Z) and the beloved Hideaki Anno (Evangelion, Shin Godzilla). Some may recall that back in 2004, Anno directed an adaptation of Nagai's classic (and possibly first) magical girl Cutie Honey, and while the reception to it might have been lukewarm, it did serve as one of the better manga-to-live-action adaptations of its time. What some people might not know is that the duo also crafted a new manga retelling of Cutie Honey a year earlier, one that harkens to Nagai's techniques in over-the-top action and comedy and Anno's character-building. That series was dubbed Cutie Honey a Go Go!, which finally found its way to our shores.

With art and co-story-writing by Shimpei Itoh (Hyper Doll, Taisho Baseball Girls), Cutey Honey a Go Go! showcases some differences from the original. Cutie's best friend Ako Natsuki has gone from being the kindhearted classmate to a balls-to-the-wall chain-smoking investigator for Tokyo's Public Security Intelligence. After a declaration of death from Panther Claw leader Sister Jill, the city is hit with a monster attack in the form of Batfly Claw. It's Cutey Honey to the rescue when things become dire, wreaking as much havoc as her foe with powerful blade in tow. However, things become more hectic for Ako when she has nosy reporter in the form of Hayami Seiji hounding her, which winds up being both a blessing and a curse when it comes to figuring out who Cutie and Sister Jill are. 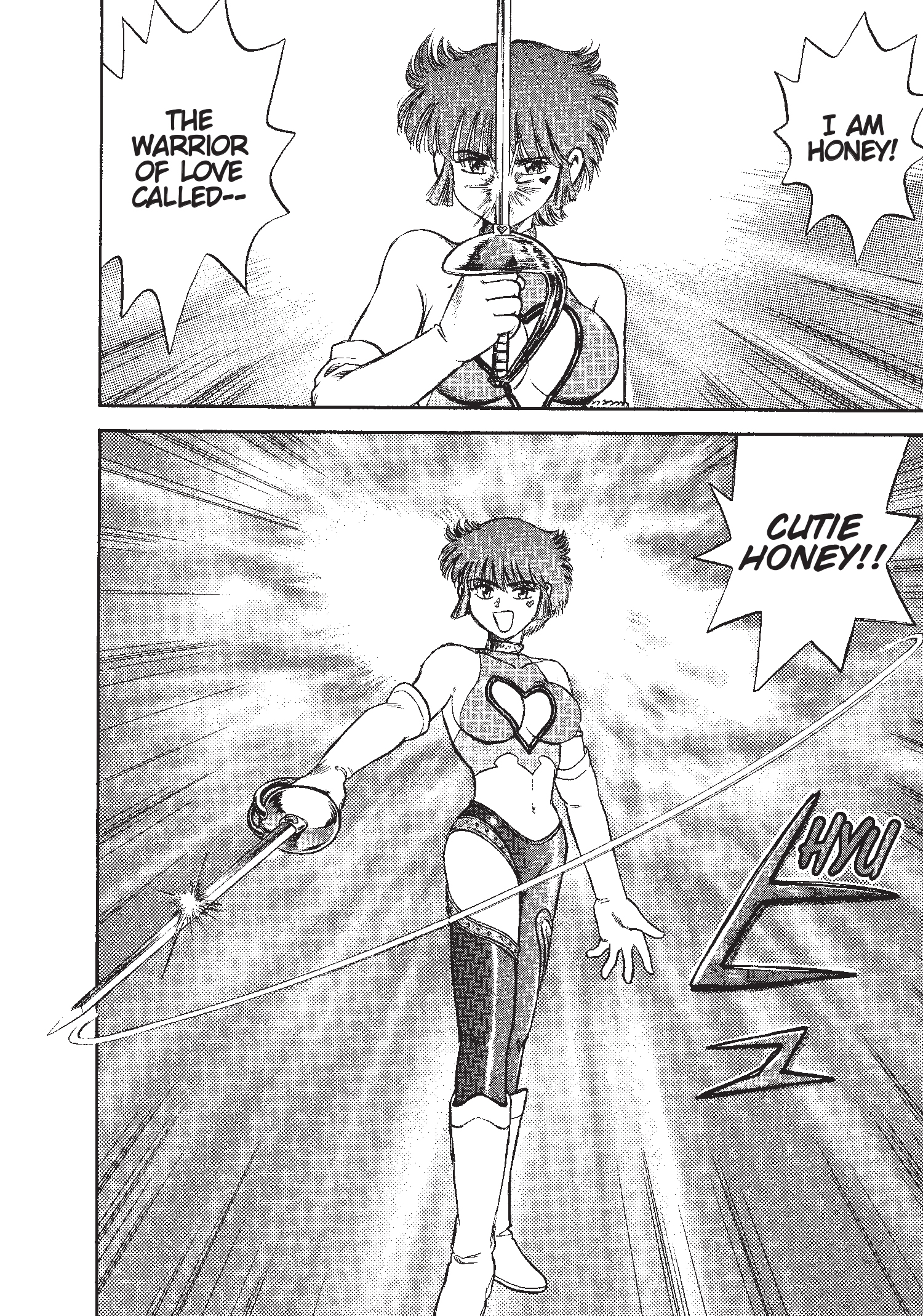 From there's Ako and the PSI find themselves digger a much dangerous hole for themselves, as other minions from Panther Claw sink their fangs into their surroundings. What's more, the rough-around-the-edges inspector winds up becoming Honey's babysitter, much to her dismay. As the attacks become larger and more violent, various clues to the origins of Panther Claw are revealed, with a big discovery that could affect Honey, Ako, and possibly the world. With little else to turn, Ako and Honey go incognito as student and teacher at St. Chapel Academy, where things aren't as they seem.

What I like most about Cutie Honey a Go Go! is how it throws you right into the midst of action after the first couple of pages. With a loud bang, the chaotic intentions of Panther Claw kick off with a piling of mass confusion and hysteria. When Cutie Honey makes her grand entrance, it's not with just style, but a slice a badassery that's more akin to Nagai's Violence Jack. At first, the battles seem comical in its presentation, with characters getting minor scratches. It's when Cutie literally cuts an enemy like sliced roast beef when the shock value turns for the jaw-dropping reaction. Heads are lopped off, people are sliced in half, and officers get impaled by flying scissors. 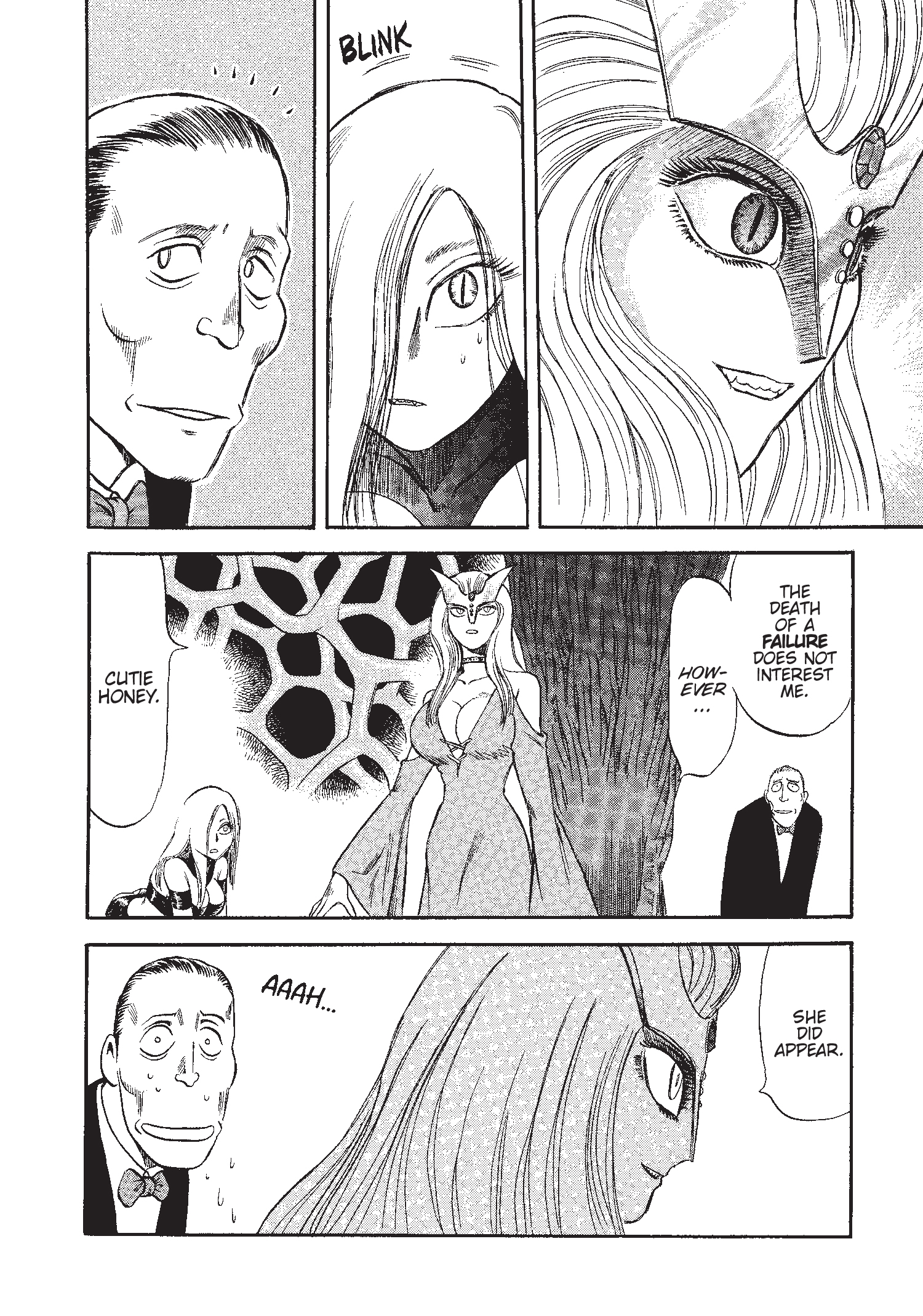 Of course, it's not a Go Nagai property without some humor thrown in. Teetering between perverted and just plain goofy, the comedy presented in this Cutie Honey adaptation does not hold back when it wants to get a laugh from its reader. Whether it's Cutie's eating habits, the insane outfits the Panther Claw villains wear, or Ako's seemingly low-tempered mannerisms, there's a big dose of funny bone-tantalizing entertainment that's packed in this omnibus collection. It's actually surprising how well both Anno and Itoh mirror the style of Nagai, to the point where it feels like it's straight from the horse's mouth himself.

Even with the oft-kilter action and zany comedy, Cutie Honey a Go Go! still finds space to fit in some deep character development. You get a great understanding of Cutie's bond with her creator Dr. Kisaragi, and why she is more human than android. Even when things seemingly turn sour and Cutie appears to lose her way, it's the words from the wise Doctor that both keep her at bay and focused on the task at hand. Although the dramatic aspects aren't as heavily dealt as the comedy and action, Itoh and Anno still manage to find its way into the hearts of their readers. 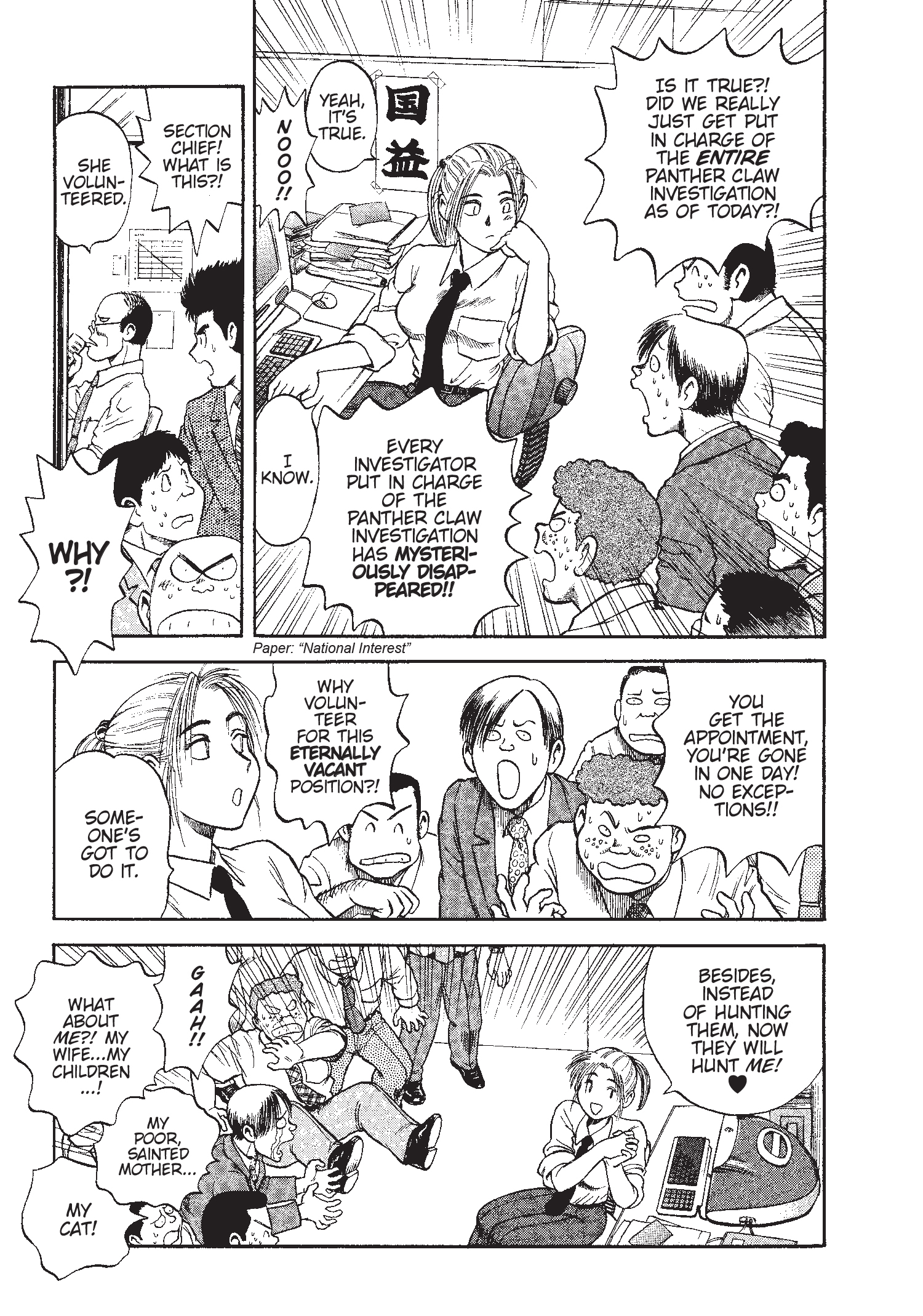 Also wonderful is Itoh's choice in art style. As this manga was released in 2003, the characters still have that very late-90's look to their appearance. Despite its early 70's origins, the attitude and vibe of this Cutie Honey adaptation feels more aligned with that of late 80's/early 90's anime and OVAs. (Mad Bull 34 and Battle Royale High School came directly to mind when I first glanced at the characters and their reactions.) It's when the action takes over when Itoh's talents are truly shown, as every punch, kick, slice, and explosion is captured with both fantastic detail and eye-popping personality.

Now for the downside: just when the final act is about to be kicked off, the manga meets its end. Due to the higher-ups in publishing, Itoh was forced to end the spinoff at the tenth chapter, thereby leaving the readers without a Sister Jill/Cutie Honey showdown. It's a bit of an out-of-nowhere thorn in one's side to see it cut off like that, as the action was just about to reach high octane levels of insanity. (Those interested in how it ends can watch Anno's live-action adaptation, that is if you can find a long out-of-print copy of it.) 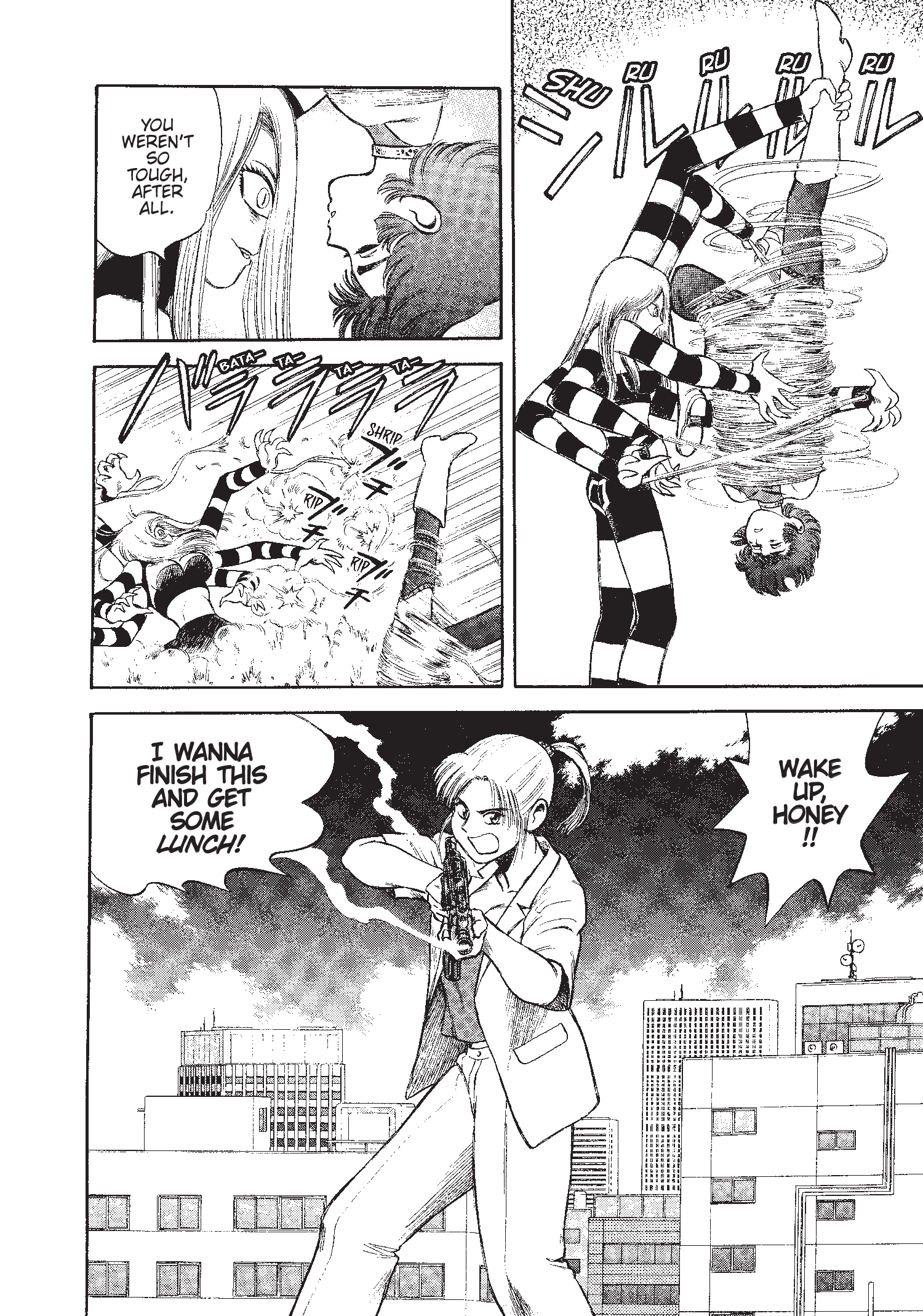 Nevertheless, despite its inconclusive means of wrapping it up, Cutie Honey a Go Go! is still a thrilling read. Even with it clocking at nearly 400 pages, Itoh and Anno's adaptation of Nagai's iconic magical girl is a page-turner that you'd find hard to put down. With its blend of action, comedy, and character-driven drama, this is one retelling of Cutie Honey that's true to its original in both soul and I-system.