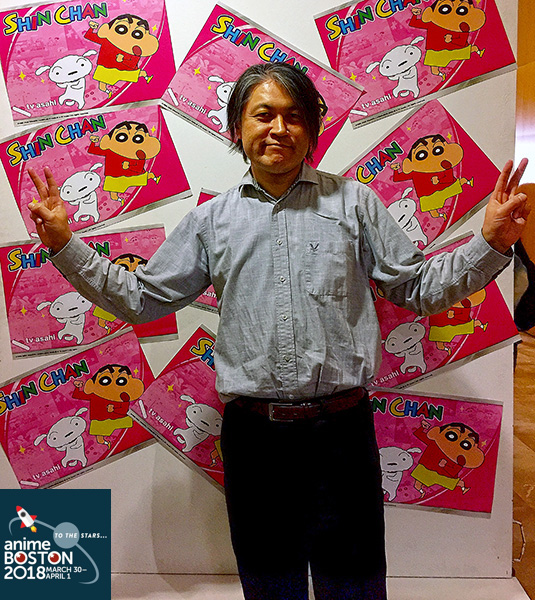 Grab some Chocobees and do the ass dance, because Anime Boston 2018 is bringing the man whose helped helm the most famous five year-old in Japan: anime director Yūji Mutō!

Yūji Mutō is most famous for directing the world-renowned TV Asahi animated series, Crayon Shin-chan. Mutō-san began his professional career directing episodes for TV series such as City Hunter, Tsuruhime Ja!, and 1993's Kenyuu Densetsu YAIBA, before moving on to direct the feature film, Bonobono. In 2004, he became the third director to helm the long-running television anime Crayon Shin-chan, not only holding this position longer than any previous director, but also during the period for which the series has become most popular outside of Japan. In addition, he has been the director of such series as Corrector Yui, Haunted Junction, Pia Carrot E Yokoso!! - Sayaka no Koi Monogatari, Ultimate Girls, and many more. He’s also done the storyboards for many series including Crayon Shin-chan, Green Green, and Scrapped Princess. This will mark his first American convention appearance. Fans can even chat with Mutō-san via his official Twitter account.

“Crayon Shin-chan is one of the longest running shows to come out of Japan. Mutō-san’s personal touch is all over it! I think that is one of the factors of its enduring success,” said convention chairman Victor Lee.