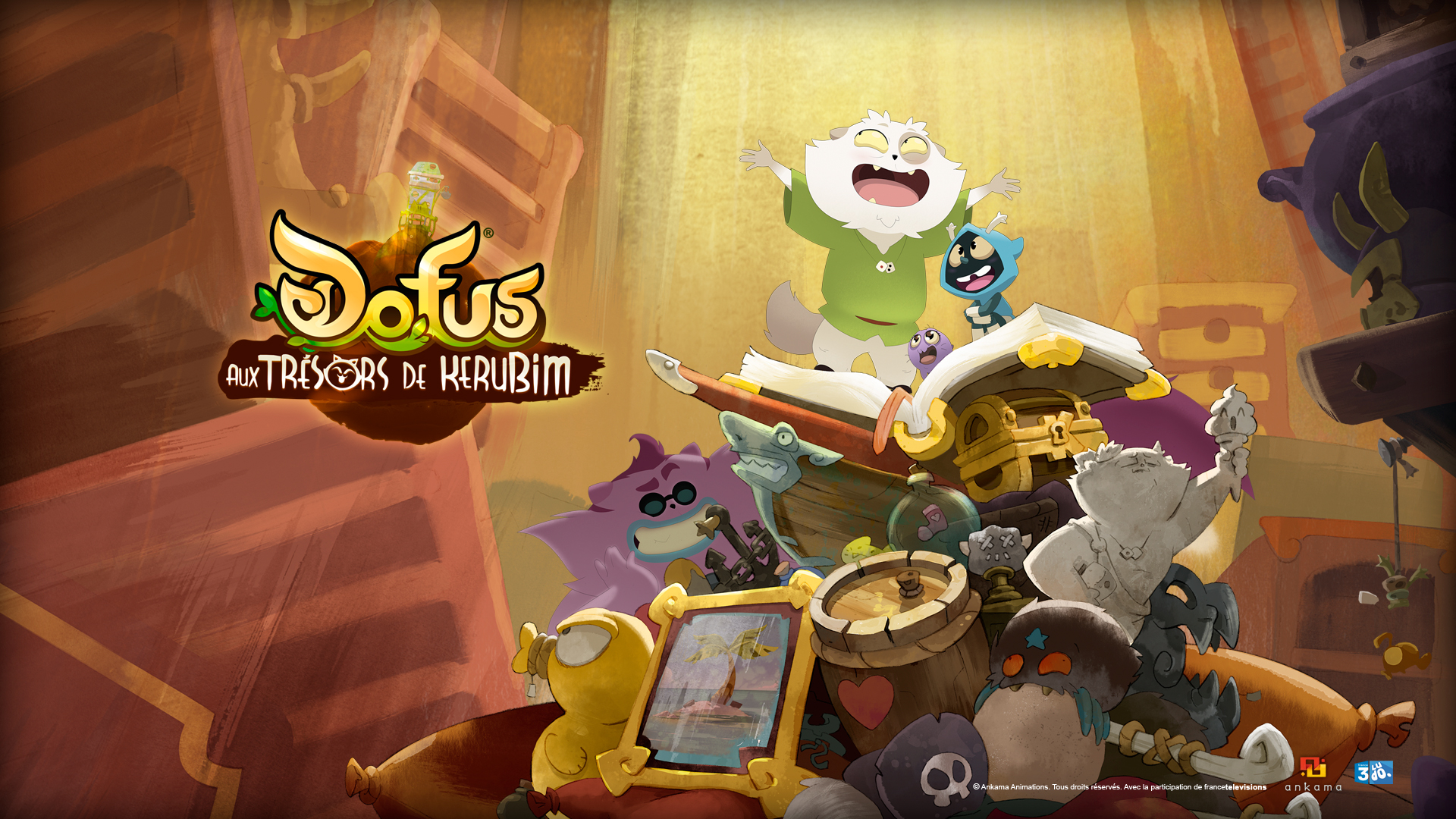 Connected by two timelines, the universes of Dofus and Wakfu share a huge bond with one another. Without the events of Dofus to come to pass, the adventures in in Wakfu would never come to be. And thus before the tale of Yugo and the Brotherhood of the Tofu, there was the story of Kerub and his adopted son Joris, which has finally been brought across the Atlantic four years after it first aired in France. But how does Dofus: Kerub's Bazaar fare compared to Wakfu, the latter of which is one of the greatest animated series of the 21st century?

For starters it should be noted that these two series are very different with their means of storytelling. With Wakfu viewers are watching the events unfold as they go along the adventure. In regards to Dofus: Kerub's Bazaar the adventure has already passed, as Kerub tells his stories of grand adventures to Joris and their new maid Simone. This leads to many to speculate the truth behind these tales the old Ecalfip is spinning, and whether they are the real deal or if it's all just hot air. 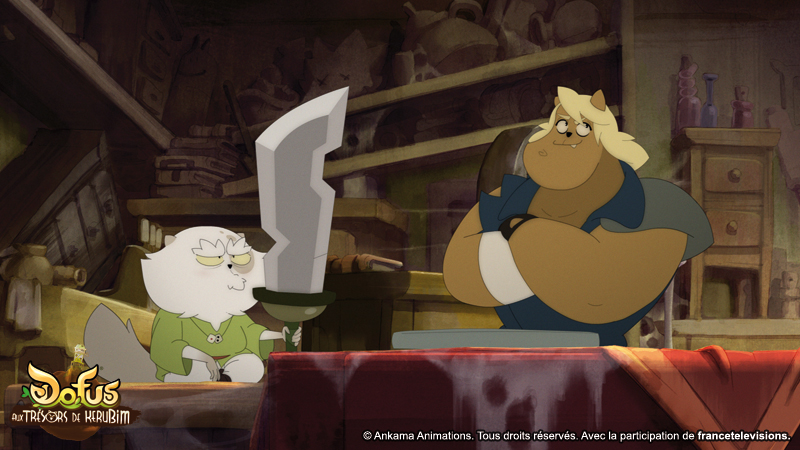 Watching as the younger Kerub balance his swashbuckler demeanor with his true goofy self is reminiscent of Leslie Nielsen in The Naked Gun series, as both attempt to take things seriously whilst walking through a metaphorical house filled with banana peels. Following Murphy's Law to a T, what can go wrong on an adventure will most certainly go wrong. A great example of this is in an episode where Kerub must save his beloved Lou from being disintegrated via a dangerous hourglass. What follows is an adventure where time repeats itself over and over, resulting in Kerub not only figuring out the traps that lead to the hourglass, but somehow discovering new ways to hilariously screw up.

Not all the episodes visit Kerub's past, as the present day brings forth some crazy hijinks for the Ecaflip and his friends to dive into. Most of the time it deals with idiotic bets being made, with a highlight being a contest involving The Judgement of the Twelve. The further along the tests go, the dumber the trials become, which may have something to do with the fact that each round ends with the combatants and spectators running to their respective bars and getting all kinds of plastered. It's a carefree scenario that plays to bigger laughs rather than showcase a character's true strengths and weaknesses. 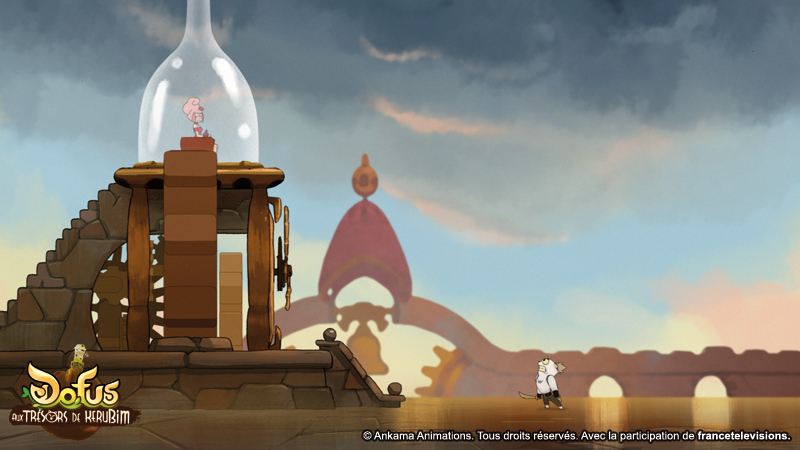 As it was in Wakfu, Dofus: Kerub's Bazaar is animated in what is seemingly the best-looking Flash animation imaginable. The talents of Ankama Animation are in full focus throughout its run, with the detail in backgrounds, characters, and action sequences flowing with a motion that's as beautiful as traditional animation. These characters emote with such personality, blending both an anime and Western style to every smile, grimace, and sneer that Kerub, Joris, and Simone present to the audience.

However it's very evident that Dofus was written with a younger audience in mind, as it does lack a certain maturity that Wakfu had throughout its run. That's not to say that only kids will enjoy this series; quite the contrary, there's a lot in Kerub's Bazaar that will entice viewers of all ages. Perhaps what makes this adaptation of Ankama's popular MMO different from the other is its overall tone. Where Wakfu made you laugh and cry for its characters, Dofus's main goal is to get the audience chuckling throughout its episodes. 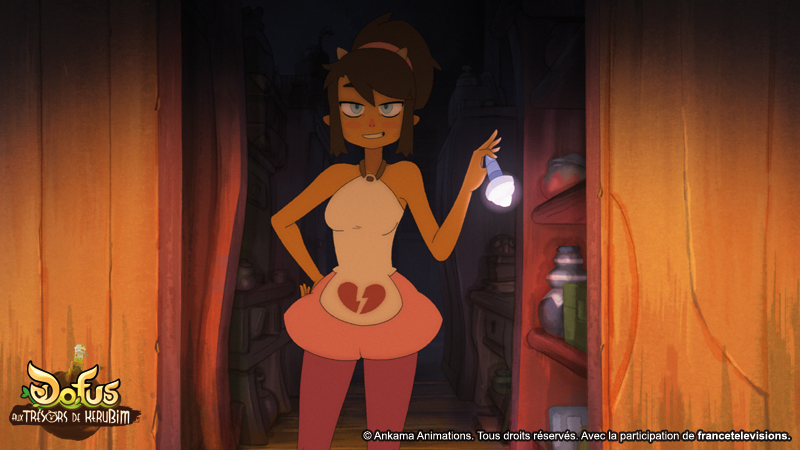 Comedy has always been the strongest suit in Wakfu, but what made it special was its ability to mesh together a grand dose of drama to build attachment to these characters. In Dofus: Kerub's Bazaar just about everything is played up for laughs, and while one can get attached to humorous characters, it doesn't reach deep enough into the heart to make you feel something for the likes of Kerub, Joris, or Simone. It's the one aspect that keeps Dofus from reaching the same heights as Wakfu, as its emotional intake is a tad weaker. (The movie, on the other hand, is a totally different story.)

With that being said, there's one thing that Dofus: Kerub's Bazaar can say it one-upped Wakfu on, and that is its English dub. There are characters in Wakfu's English adaptation that made me cringe hearing it, to the point where I realize it's the main flaw keeping it from reaching the non-French-speaking audience. Not only does the dub in Dofus match the voices well with their respective characters, but they brim with the same personality. Jimmy Hibbert's Kerub brings to the table a wise old adventurer without sounding too cartoony, whereas Julie Ann Dean's Joris has the right amount of spunk and wonderment a kid should have. (The only real flaw with the dub is its means of lip-syncing, which has its eyebrow-raising moments due to some of the more expressive ways the characters talk in the original French version.) 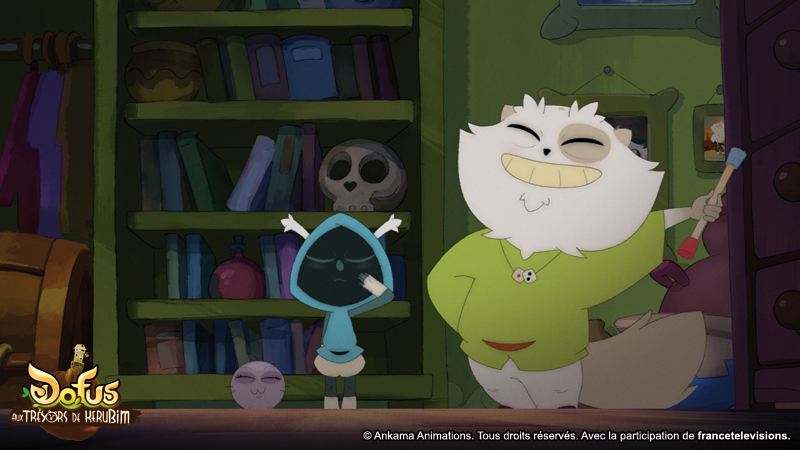 While it lacks the emotional depth that Wakfu nailed down, Dofus: Kerub's Bazaar is still an entertaining affair thanks to some spot-on humor and surprisingly good action. It may not have you grabbing hold of these characters in the long run, but these tales of the feline's mighty collection of treasure will no doubt keep viewers coming back for more. Needless to say, this is one anthology of adventures that showcase how vast and wonderful the world of Dofus truly is for the eye and the mind.

Dofus: Kerub's Bazaar can be viewed on VRV. Episodes 1-26 were observed for this review. Promotional consideration provided by VRV.

Background Noise: What A Terrible World, What A Beautiful World by The Decemberists - Like Kerub spinning a tale for young Joris, Colin Meloy and his Portlandian crew tell stories of love, lust, and growing up on every one of their albums. Their 2015 record embarks on some of Meloy's more personal feelings, be it with romance in "Philomenia" and "Make You Better" to his thoughts on an American tragedy in "12/17/12". With guitar and banjo in hand, even the most grim of fables sound whimsical when The Decemberists bring them to life.