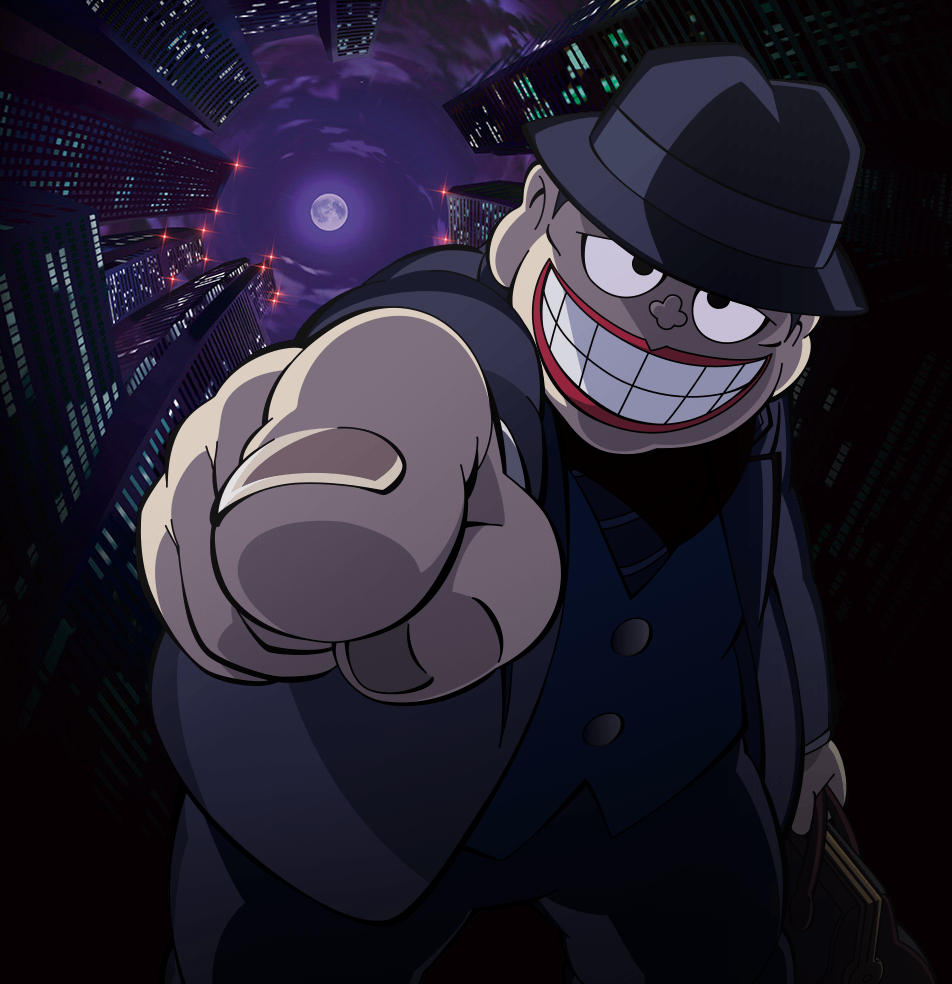 Who is Moguro Fukuzo? For the past few weeks, the actions of this salesman have led me to think about what kind of individual he is. As each episode opens in The Laughing Salesman, we hear Mogura speak about wanting to fill the holes in people's hearts for no charge, only for it to always end with the person he's helping ending up worse than before. Is Moguro to blame for this, or is there something far deeper going on within society that's causing those struggling to end up screwed over in the long run?

The 2017 adaptation of Doraemon co-creator Fujiko Fujio A's manga takes place in the present time, where Moguro roams the cityscape to seek out potential clients. These folk can range from young students and overworked salarymen to even retirees who've already lived out their purpose. Often it's the client bumping into Moguro in the show that leads to "fate" dealing a too-good-to-be-true hand, whereas other times the David Lynch-like character follows a person until they give in to what he's attempting to sell. There are never repeat customers, as those who watch this anime will easily see why they'd never want to deal with this chortling businessman again. 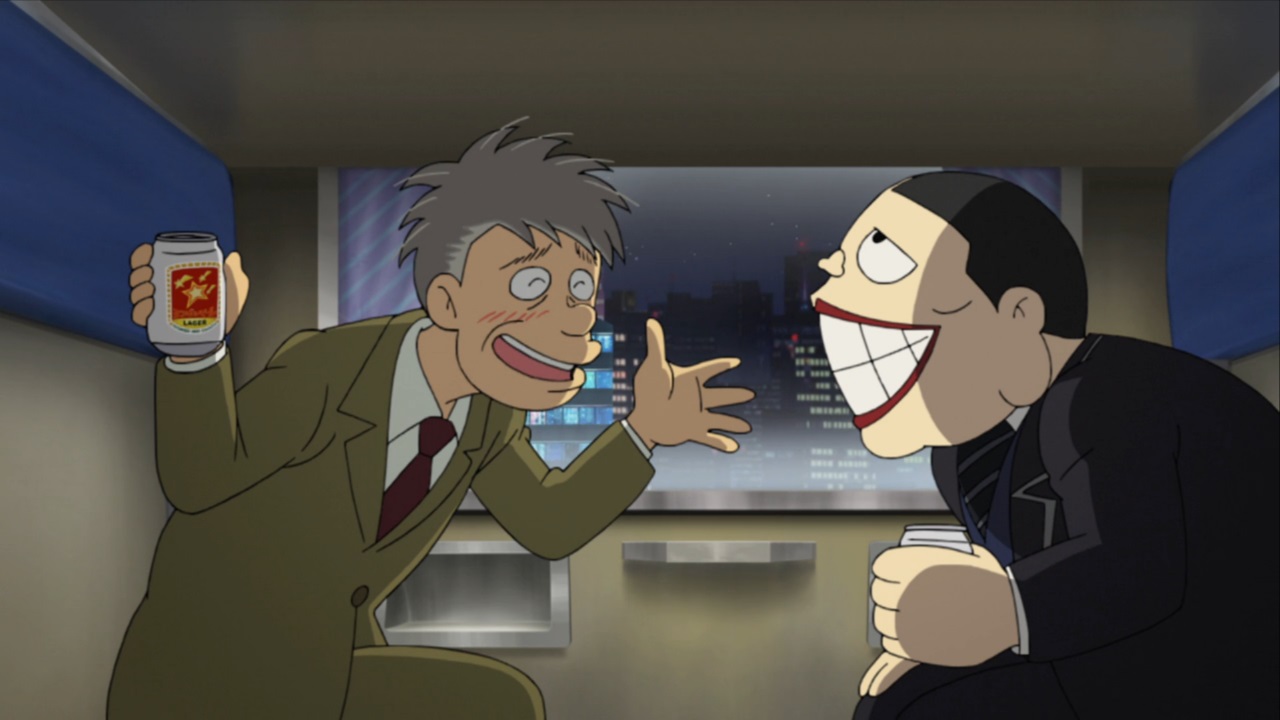 Each episode of The Laughing Salesman is split into two parts, with the focus being on a different client each time. Sometimes it's a downtrodden employee wanting an escape from the stresses of normal life, be it one looking for a secret club or an enhancement of one's hobby. Other times it's someone seeking to better their lives for the benefit of others, like a guy trying to break his night-owl habits to benefit his girlfriend's schedule or a mother bettering the living situation for her and her son. At first, all goes well when Moguro extends a helping hand, with things getting better for the client.

However, human nature can be quite the finicky thing. The clients soon steer off the path that Moguro warned them to be on, which results in their situations becoming far more complicated. With a loud "Boom!", Moguro curses the individual to live out the rest of their life in what can only be described as a suburban Hell. An unhappy marriage, lost property, becoming broke, and even having a life controlled by a hobby are just a couple examples of what can occur for those who don't take Moguro's advice. 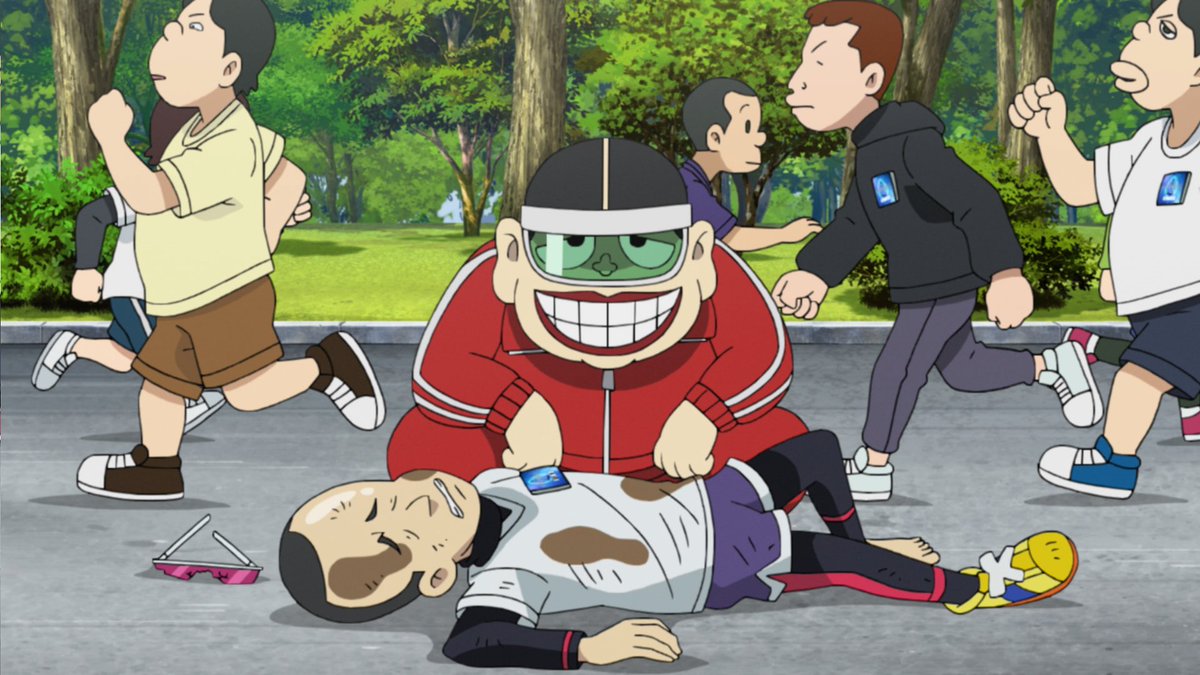 This leads me to think about who's really at fault for the end results of these clients, which can be pointed at three different directions. At first it would appear that these people have no one to blame but themselves, as they would not have dealt with a terrible turn if they didn't stick with Moguro's suggestion. Of course had Moguro not given this opportunity to these people, they'd still be moving about without knowing the dangers of these desires. Moguro is offering them a shiny apple after all, and he knows that they're bound to bite into it so they can taste some sort of relief or experience.

But no, the true wag of the finger is best bestowed upon society itself in The Laughing Salesman. The way the work world pushes its employees towards tiring situations is something that mirrors real-life in many sad ways. This planet treats people like mere cogs in a massive machine, which this series presents on many eye-opening levels. Sure, it's done for laughs at times, but when you look deeply into these characters and the situations they're in, it's hard to not relate to them. And if some magic man came around and promised them an escape from this Hell on Earth, then you can honestly bet they'd do anything to step out and experience something new. 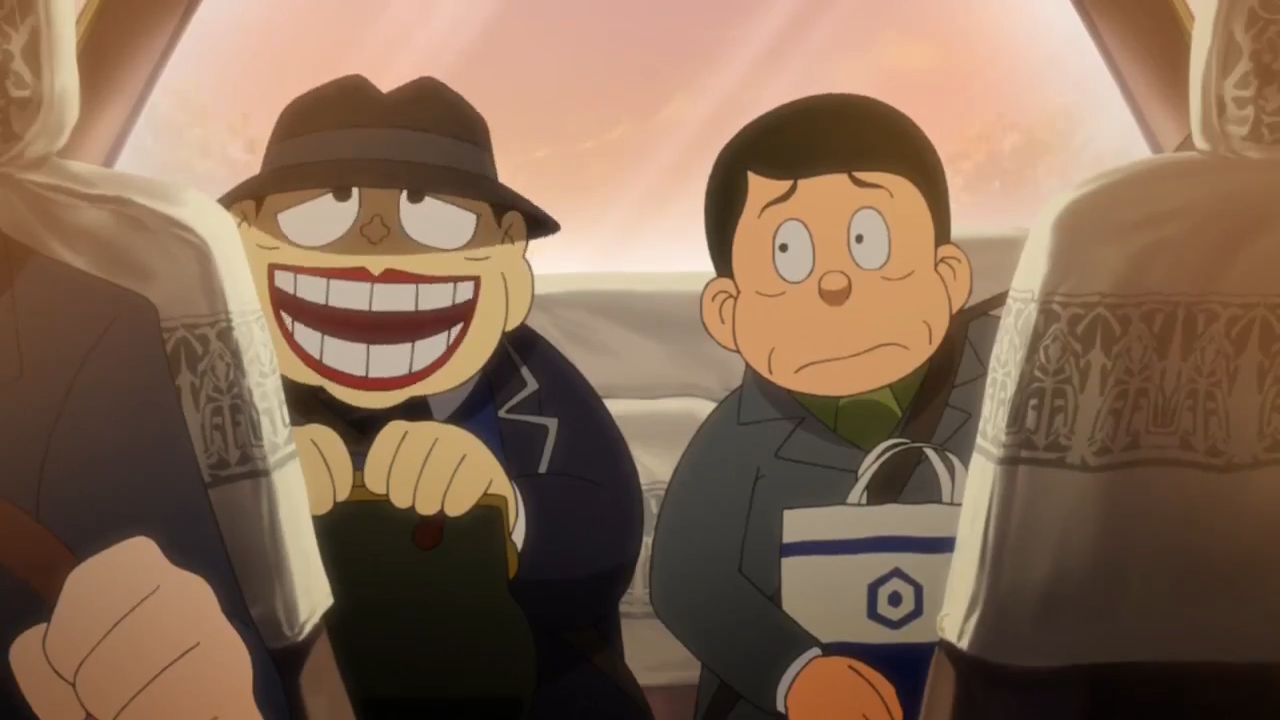 I know that The Laughing Salesman isn't a show that everyone isn't going to be all gung-ho about. Its retro-looking visuals (which often remind me of the recent Osomatsu-san remake) aren't the prettiest to look at, and its desire to keep us focusing on different strangers each week rather than Moguro's true intentions will kinda turn off some viewers. However if one were to look at this in the same light as a series like Tales from the Crypt or The Twilight Zone, they can easily fall in line with what's going on in this universe that Fujio A crafted half a century ago.

Many situations, one source of a solution, and a whole larger can of worms being opened is what keeps this series interesting thus far. You know something is bound to happen once you see Moguro come close to the potential client, but it's the means of how their life is flipped around that keeps what's happening fresh each time. No two punishments are alike, and what often occurs to them will either have you laughing or feeling sorry for the poor bloke. At any rate it's highly entertaining to see what sort of path is traversed, even if it might hit too close to home for some. 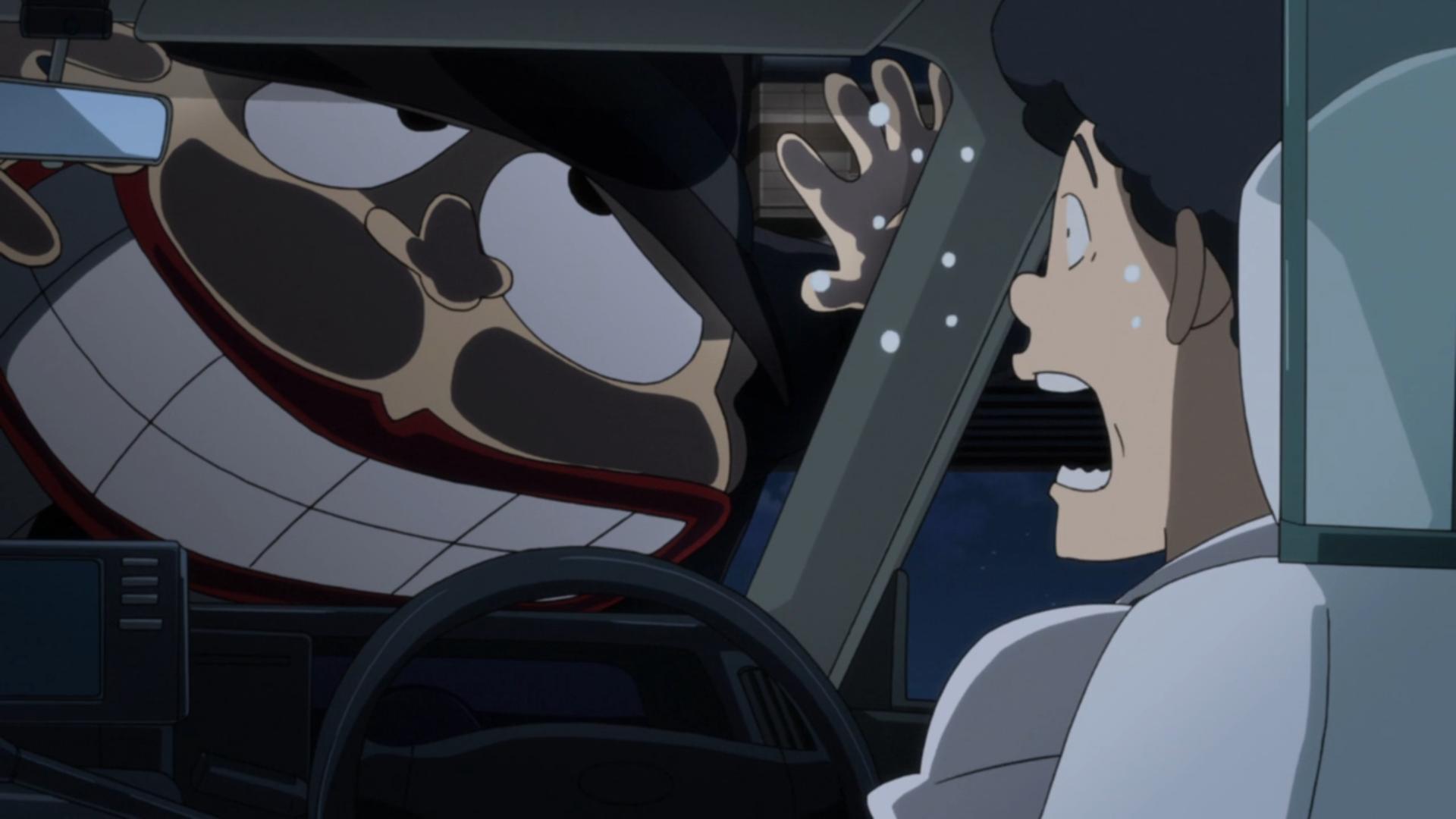 The Laughing Salesman works as a cautionary tale, one that tells you that things that are too good to be true always are. Not only does that apply to Moguro's promises, but it also rings true for what is promised to a person when they enter a new job, a relationship, or even something as simple as a hobby or a recreational activity. All that glitters isn't just gold; it's also the teardrops of those whose dreams have been broken by a cruel and unfair society. (Take my advice: if you see a man who looks like a cross between Tom Waits and game critic Jim Sterling offer you his business card, it'd be best to avoid him at all costs.)

At any rate, The Laughing Salesman is a welcome return of a classic character that no fan of old-school anime should dare miss. It may have its faults, but its overall tone and presentation give way to a fun, stress-free time on the TV that have none of Moguro's long-running aftereffects. In fact, it may very well fill that hole in your heart... 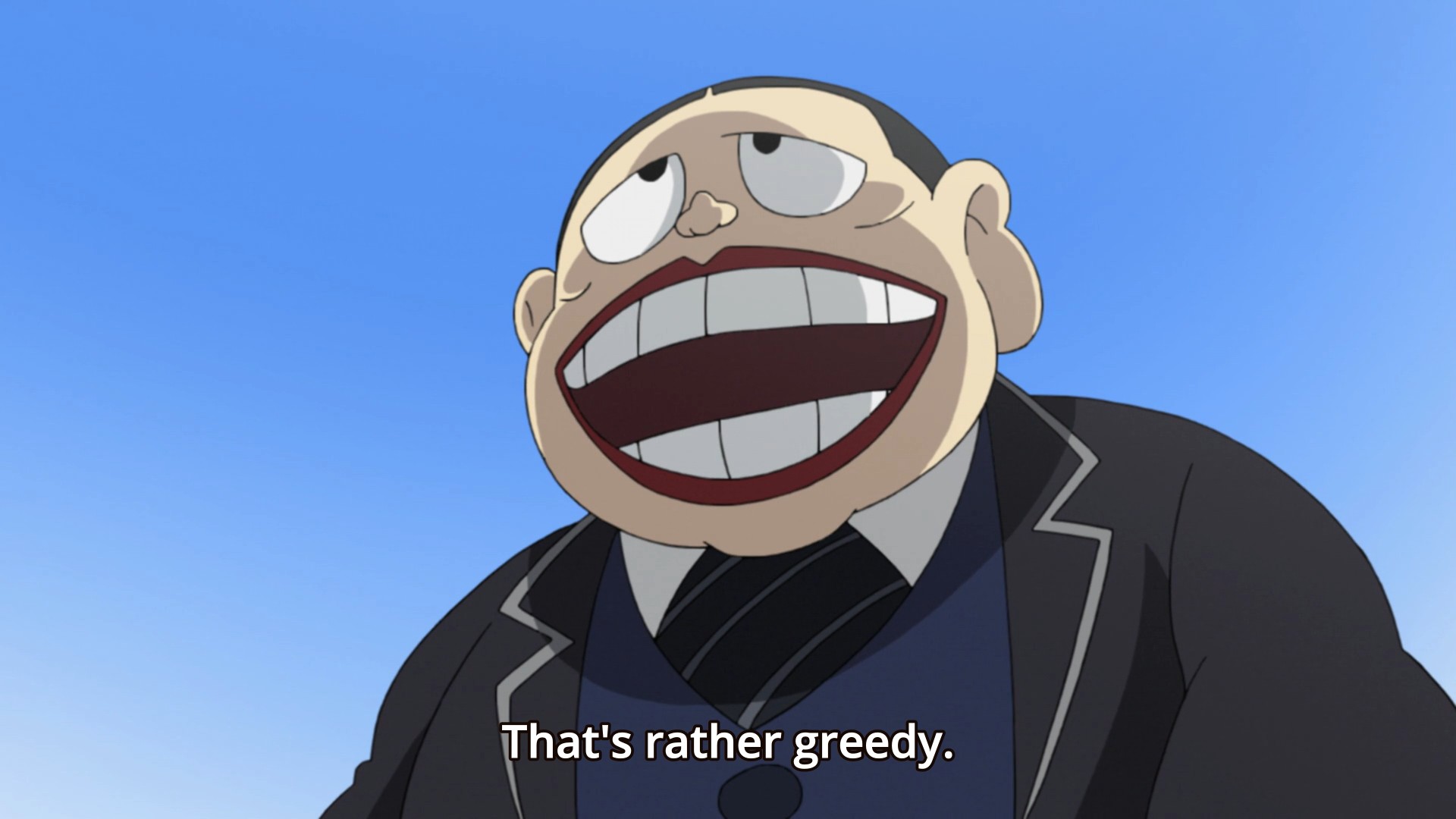 The Laughing Salesman can be viewed on Crunchyroll. Episodes 1-10 were observed for this review. Promotional consideration provided by Crunchyroll.

Background Noise: Bad As Me by Tom Waits - The seventeenth album from the luckiest carnival barker in the world is filled with heartache, torment, and even a pinch of fun. Waits has always been a man of the world, with his folksy mannerisms and whiskey-filled storytelling being filled with philosophical and precautionary forebodings. Like Moguro, Waits knows how to craft a bargain like an over-promising devil. (He has, after all, played a variation of the deal-making Devil in Terry Gilliam's The Imaginarium of Doctor Parnassus.)