HomeTabletop/Card GamesCARD GAME REVIEW | "Everyone Get The F%$#" Into This Card Game!

CARD GAME REVIEW | "Everyone Get The F%$#" Into This Card Game! 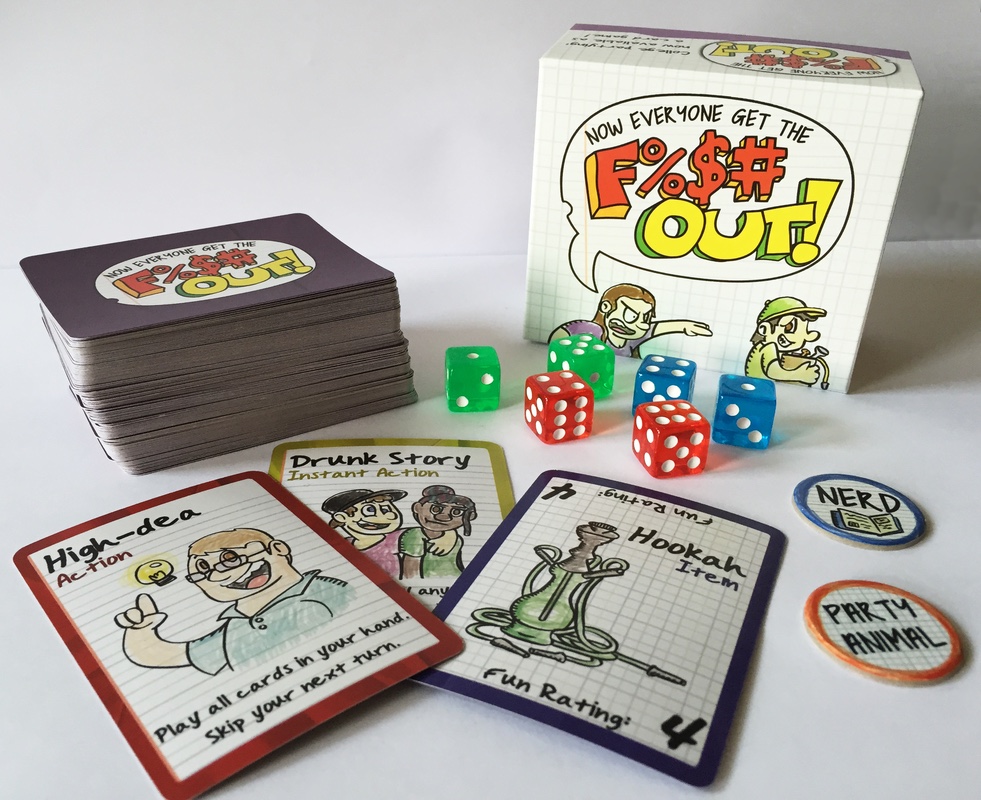 CARD GAME REVIEW | "Everyone Get The F%$#" Into This Card Game!

Inspiration can arrive in some of the strange places. For Starcap Games, the idea for their latest card game came from a real-life experience. Having a loud college party in his dorm, the company's founder Pat "Rowan" Roughan was unaware of his roommate's need to study for a final that was to occur the next day. Fed up, the roommate put matters into their own hands, by screaming, "EVERYONE, GET THE FUCK OUT!!!" Still drunk, Rowan came up with an idea, but was advised by his friends to sober up before jotting down the game's blueprint.

And so, after years of tinkering, Starcap Games has unleashed what could be one of the most fun card games around: Now Everyone Get The F%$# Out!

At least three players take the role of rival college students, as they're attempting to study for a final. However, the dorm has become party center, with drunken peeps entering your room thinking it's party of the shebang. In order to find pure quietness, each player must take the role of a sniveling douchebag, and proceed to vacate the partiers from their room into the other geeks'. Get the number down to zero, and you win and succeed in studying for the final. 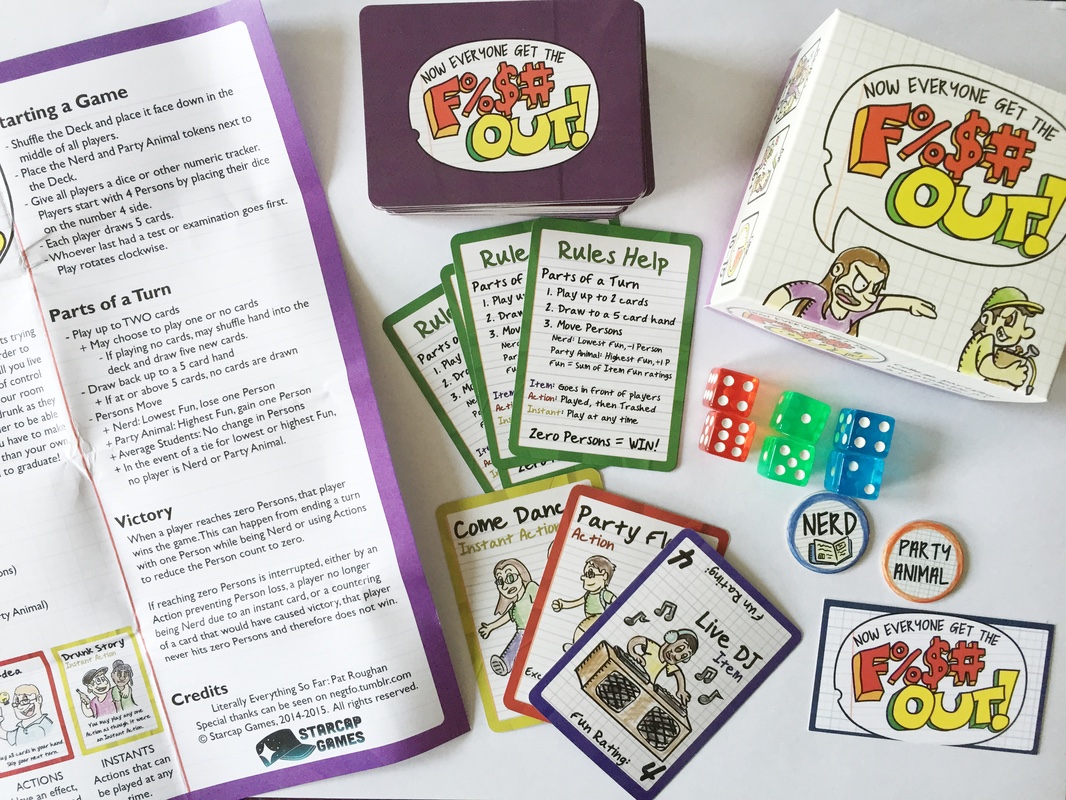 Players draw five cards, and start out with four roommates. There are three kinds of cards: items, actions, and instants. Items are tossed at your opponents in order to gain the interest of the party-goers, each one numbered 1-5 in the Fun Rating. Actions have an effect that can change the course of the game, whereas instants can be played at any time to further change or prevent the events at hand.

The player with the highest total fun rating gets labeled the Party Animal, with each turn going by resulting in one extra party patron entering their premises. Meanwhile, the player with the lowest fun rating will be labeled the Nerd, losing a party patron during each turn. Players that aren't either the Nerd or Party Animal see no difference in their party peeps, whereas ties with the highest or lowest will mean no one is the Party Animal/Nerd. 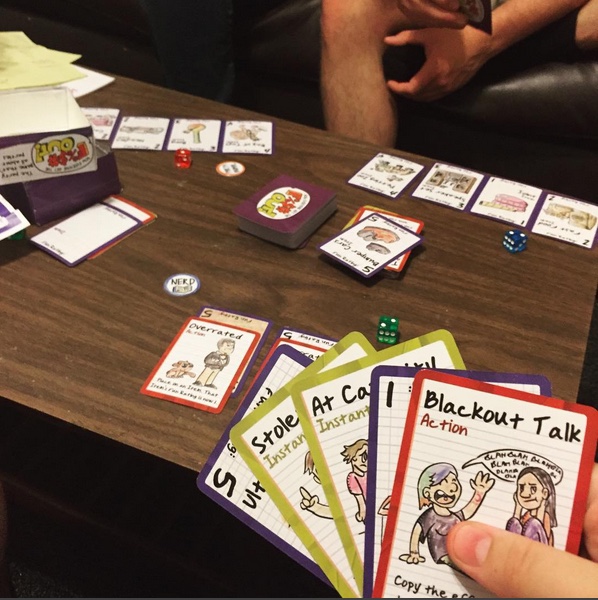 Now Everyone Get The F%$# Out! can keep the card game party going depending on the level of douchebaggery a player can toss at their opponents. One moment, a victory could be at hand, only for another player to toss an Action or Instant Action card and have drunken patrons start raiding their room. Fortunately, the gameplay style is filled with both originality and hilarity.

It's hard to not snicker at some of the items you can leave in your opponents' rooms. Sure, there are average items like Phone Music and a Chill Lounge, and there are certain items that are more like ideas like Adorableness and Good Vibes. However, try keeping a straight face when you throw a Pet Rock, a Mech Bull, and a full-blown Sex Dungeon into a foe's room. There are also various booze and drug cards, which makes the game even more challenging if you decide to go the Zero Tolerance rules route.

Action cards can help rid your tossed-in items into someone else's, or even lower or completely destroy the fun rating of your items. Since these cards can only be played during your turn, it's then best to save your instants to counter the current player's actions and motives. Despite its rowdy ways, there's quite a good need to strategize your moves and predict the motives of your opponents as you try to end the party in your room.

However, don't let the whole strategy aspect scare you away from Now Everyone Get The F%$# Out!; in fact, the game is very easy to dive into. With a great set of players and a fun attitude, you can expect hours of fun with Starcap Games' latest card game beast. Your goal may be to study, but in the end, Now Everyone Get The F%$# Out! will get you wanting to party with these card game shenanigans non-stop!

Now Everyone Get The F%$# Out! is available at Amazon.com