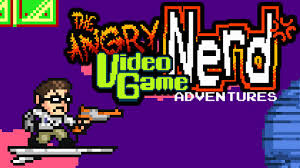 If you have been on the Internet and YouTube long enough, it's very likely that you've heard of the Angry Video Game Nerd. The Nerd himself might've slowed down his output following the film, but at last a video game has been been made. Courtesy of FreakZone Games, Angry Video Game Nerd Adventures makes for a decent platformer in spite of how some may feel about the character. It does have a few shortcomings though. 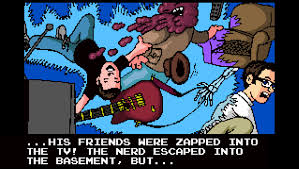 The game's story is about the Nerd and his friends playing yet another shitty game and getting angry. Then, of course in Captain N fashion, he gets yanked into the game world along with the others. After the first level, you can pick which order to complete the rest, with the final level unlocking afterwards. Its design is modeled in a classic platformer style. You start out as the Nerd, with a zapper as your weapon, and can shoot upwards both straight and diagonally. There are some secret areas which either give you extra power-ups or the Nerd's friends to play as.

Each character has their own abilities. The skeleton of Keith Apicary is fast but has weak jumping power, although his sound waves can go through walls and have a wide arc. Mike Mattei uses a light saber and jumps higher, but is more useful for their ability to see hidden platforms. Then there's the Bullshit Man, who is slow, but powerful. His shots have a short range though, and his jumping is weak despite being able to double jump. The 3DS and Wii U versions also have a nice display on the bottom screen and Gamepad respectively. This makes it nice to know what exactly your sub-weapons do, or switching to another character on the fly as opposed to the cycle button. 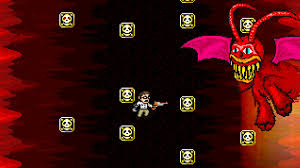 The levels are all somewhat based on the various terrible games that the Nerd has played. Parodies of Castlevania II, anything LJN, or just generic fantasy or happy land stuff is thrown in there. Angry Video Game Nerd Adventures is challenging, though. Sub-weapons sometimes are terrible, and there are plenty of hazards like instant death lasers, disappearing blocks, and actual death blocks. These hazards can be traversed by the Nerd himself, but it's often better to switch to another character to take advantage of their weakness and turning them into strengths. This is because some tight jumping feats are near-impossible to make and you can't control the height of your jumps all that well (or you just need the slow movement of Bullshit Man for precision stopping-on-a-dime maneuvers).

Of course, the Nerd will share his crass commentary on moments in the game. Thankfully nothing was altered from the PC release, although I think that the game could have benefited from some voice acting, as it's sometimes hard to catch the in-game commentary while you are playing. 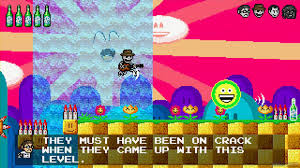 The designs of the game are suitably ugly, and pretty intentional. 3D effects are a bit weak, but it's still decent. Music is done in a chiptune style, and fits the levels well, although it's not worth seeking the soundtrack to. However the game is pretty challenging and you will die a lot until you learn the levels in totally. You only get 30 lives and limited continues on normal, but you get unlimited lives on Easy. (It's best to play on Easy first.)

Despite what you might think of the series, Angry Video Game Nerd Adventures is a decent platformer. The game is mostly for fans of the show, as players might not tolerate the jokes. If you like series, give it a try, as it's only 10 bucks. Then again you might rather eat the rotten asshole of a roadkill skunk, and then downing it with a beer.

The Good – retains all of the content from the PC original, now for on-the-go play
The Bad – hasn't fixed any issues regarding controlling jump strength
The Ugly – The designs are ugly, as it should be.

SUMMARY: Angry Video Game Nerd Adventures is a very challenging, albeit short platformer, that's pretty decent, although it has some flaws. Nothing was altered for the 3DS release, which is always a good thing.