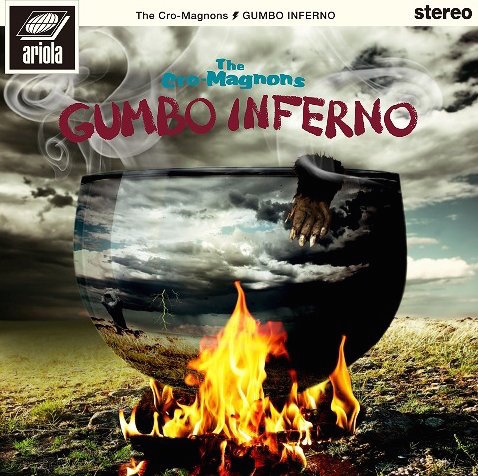 Even eight years into its inception, it's still hard to overlook the fact that The Cro-Magnons is not The Blue Hearts. Granted, it has the legendary punk band's vocalist Hiroto Kōmoto and guitarist Masatoshi Mashima fronting it (as did the previous band The High-Lows), and they have released countless Top 20 hits, but the attitude doesn't feel quite the same as the group that brought us "Train Train" and "Linda Linda." Perhaps it's time we stop forcing ours hopes towards a reunion that will probably never happen, and accept that Kōmoto & Mashima are happy being The Cro-Magnons. Once we do that, pop on their new and surprisingly fun album Gumbo Inferno.

Their eighth LP Gumbo Inferno is 39 minutes of punk sing-alongs and guitar riffs straight out of the British punk explosion. Opener "Tabidachi wa Neanderthal" keeps the rocking at a steady beat with a tambourine in one hand and a clenched fist held high in the other. "Spark!" reigns as one of the album's highlights, with drummer Katsuji Kirita laying waste to his cymbals and Mashima pulling out a nice psychedelic solo out of nowhere. The band even knows how to get silly with "Dōdōdodōdō," a song with a nonsensical chorus surrounded by a simple and catchy melody.

Some tracks have a calmer vibe compared to the rest of the pack. Recent single "Kisu Made Ikeru" is a cute love song about trying to get that first kiss from someone you adore. "Lulu" takes a slower approach with its lovey-dovey mentality, but not without a level of angst fueling Kōmoto's projected lyrics. "Inu no Yume," on the other hand, takes a faster approach with a little Clash-like reggae influence thrown in, giving off the feel of an excited canine running through a never-ending field.

Gumbo Inferno may not have the makings of a classic, but it's certainly The Cro-Magnons strongest since 2007's Cave Party. While we'll never hear Kōmoto and Masatoshi reach into the farthest depths of their back catalogue ever again, at least be happy that the duo is still releasing new music with a band that knows how to keep up with both their style and energy. It's not the liveliest release to come from the duo, but in the end Gumbo Inferno is a solid Cro-Magnons record that shows its teeth as it bites down gently along the listener's earlobe.