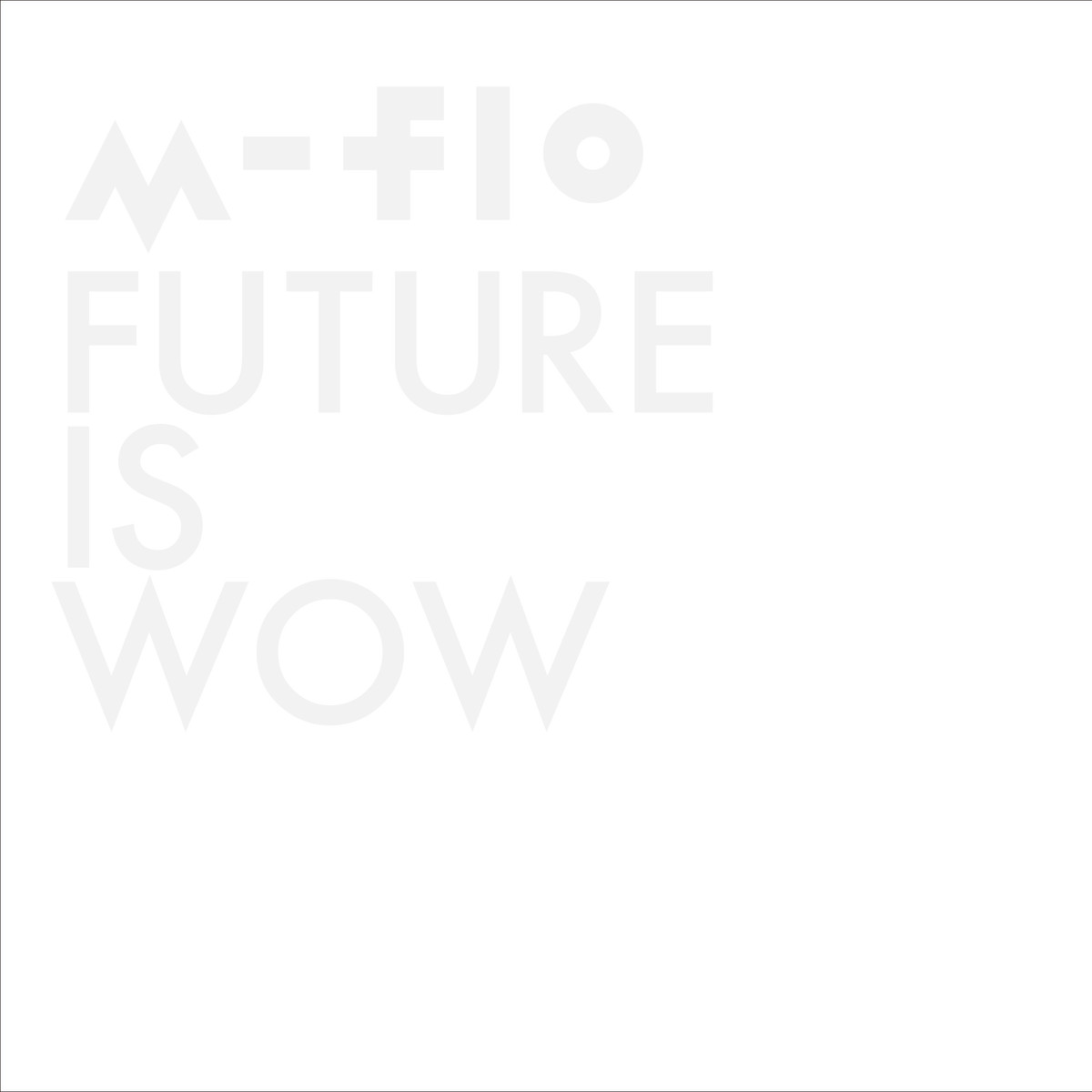 Since forming fifteen years the duo of VERBAL and Taku Takahashi have been bringing an intergalactic sound to the club that is often imitated, but never replicated. They brought sexy back with 2004's Astromantic, a whole two years before Justin Timberlake stole all the credit, and have been the kings of collaboration thanks to their wildly successful "Loves" series. The past couple years m-flo have somewhat gone back to their roots, focusing more on their strengths as a duo. On 2012's Square One it worked nearly-flawlessly, whereas 2013's Neven sounded more like a collection of b-sides rather than a whole album.

This year m-flo have decided to bring their music to a whole new level with Future is wow, a warp-speed dance party that the whole world can (and will) dance the days and nights away to.

Future is wow takes cues from m-flo's last two albums, along with sprinkling in some "Loves"-based guest appearances to make this dance party taste even sweeter. Opener "Spark" showcases how much VERBAL has evolved as a rapper, spitting rhymes with a will.i.am attitude and an Eminem flow, as guest vocalist Ruby Prophet takes the listeners deeper into space with her siren-like melodies. Taku Takahashi continues on with his futuristic trend, creating beats and rhythms that have yet to even grace one's headset, let alone the dance floor. His embrace of past, present, and future grooves is in full force on "Welcome to the Bassline," a rump-shaking, beat-dropping track that is worthy to be played in any laser-filled, black-lit club.

Taking a cue from deadmau5, "Go Crazy" takes things slow before cranking the party vibe up to eleven. BIGBANG's SOL surprisingly helps brings out the best sensation in the track, one that lays claim to the night life that encompasses the bright cityscape. "Young & Restless," a collaboration with American electronica duo MNDR, builds a bridge to the Japanese and American club scene, the same way VERBAL's Teriyaki Boyz side-project helped build a bridge to the two countries' hip-hop world with the help of Pharrell and Ad-Rock. Hearing Ayumi Hamasaki have a bit of a gangsta attitude in "My Way" sounded more humorous than badass, but when she starts to sing it acts as proof to why she's one of the pop world's best vocalists.

A theme of controlling the sky plays heavily in Future is wow, especially in two of its tracks. The first, "FLY," featuring [Alexandros] frontman Yoohei Kawakami, acts as an enabler of good intentions, letting its listeners know to always embrace who they are. It's the perfect dance track that also acts as a great human rights anthem, something that Lady Gaga forgot to get down properly on her recent ARTPOP album. "own the sky," on the other hand, is a dream enhancer, giving all those who hear it hope that their fantasies may one day come true. Bella Blue's soft vocals parallel well with VERBAL's mic skills, with the former holding the listener's hand as they slowly enter the dreamscape and the latter pushing them faster towards their life goals.

Closing track "1NCE AGA1N" blends everything that makes m-flo the club kings of the world, with VERBAL's talents rapping in both Japanese and English with a grand flow as Taku takes control of creating their trademark sound: one that spans lightyears away from any other beat maker on Earth (and perhaps the galaxy itself). This is what makes this duo stand out from any other hip hop/house group: their ability to extend their melodies to a level not yet heard by human ears. It's what keeps their songs relevant during any time period, the same way any Beastie Boys album has yet to age.

Future is wow continues to show why m-flo are the true kings of the club scene, even if other artists try to sit on their throne unwittingly. Great pop melodies, fantastic dance beats, and rhymes as fluid as they are intelligent are what make Verbal and Taku's latest album a must-own for any club scene, especially for those that are looking to keep the party going towards space-like infinity.

"Future is wow" is available worldwide on iTunes.