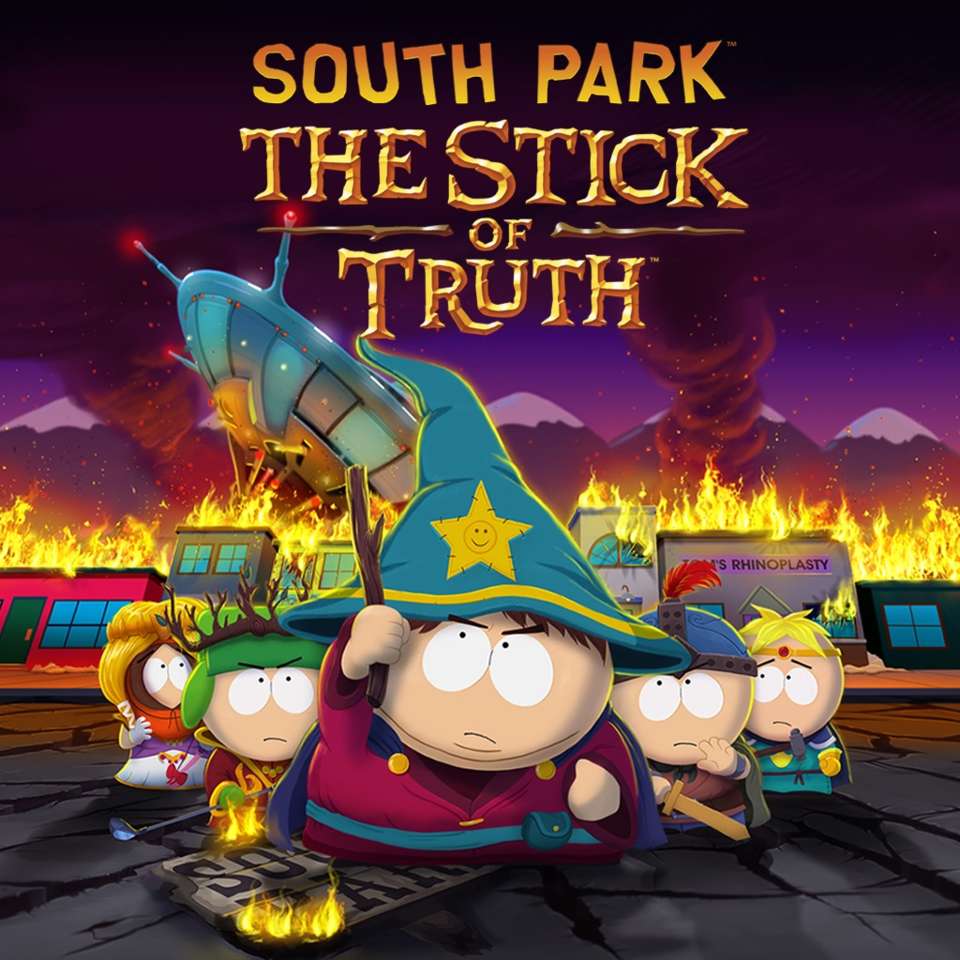 For the last seventeen years Trey Parker and Matt Stone's South Park has been a staple of the pop culture realm, maybe even more-so than The Simpsons. With its ability to stay relevant to the times (what with its weekly production schedule) and the introduction to such concepts as Christmas poo, farting Canadians, & Kanye West as a gay fish the series about four foul-mouthed kids living in a small Colorado continues to be one of the best-written TV series. While there have been some video game adaptations, ranging from first-person shooters to kart racers (which, I'll admit, I had a lot of fun playing), never has there been a South Park game that has had the full attention from their creators throughout its entire production.

That is, until now, with the release of South Park: The Stick of Truth, an RPG that stays incredibly true to the show's roots and humor.

The Stick of Truth has you take control of a new kid who has just moved into South Park. After being told to make friends by his parents, he comes across Butters and another kid battling it out LARP-styled. Soon after the new kid rescues him Butters introduces him to Cartman, the Grand Wizard King and ruler of the Kupa Keep Kingdom (his backyard). Cartman and the other humans are currently at war with the elves (led by Kyle and Stan) over the most powerful object in the world: The Stick of Truth. The new kid, now dubbed Douchebag, must protect the Stick from falling into the wrong hands, while at the same time try his best to keep the town of South Park from being destroyed by Nazi Zombies...again. 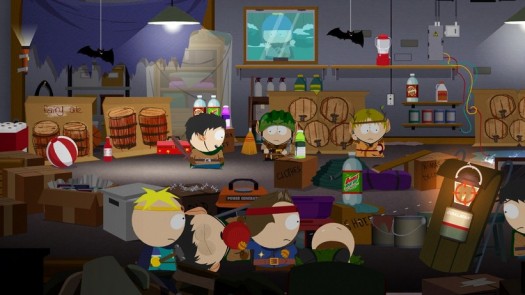 The Stick of Truth has you choose which class you'd like to fight as: warrior, mage, thief, or Jew. For this review I played as the warrior, which gave Douchebag some nice feats of strength thanks to his poorly-made (but damage-inducing) weaponry. As you progress through the game you will learn how to control the Dragonborn, a fancy way of saying "magic farts" to sharting levels. When in battle you can also control one of the other kids, all of which have their specialties like Princess Kenny's archery skills to Stan's sword-wielding powers. The best comes in the form of Butters, who can change into the anime version of Professor Chaos and lay waste to any enemy standing there.

Controlling South Park: The Stick of Truth is relatively easy. As the battles take place with turn-based attacks you simply choose your attack, and press the right button to lay a heavier smackdown on your opponent. Normally I am not into turn-based RPGs (actually, I hate them!), but The Stick of Truth managed to make the moves and powers so funny that it was worth having to go through what would usually be the boring motions. Maneuvering around the town is a cinch, and once you find all the quick travel flags completing the game's tasks will wind up being a lot easier. 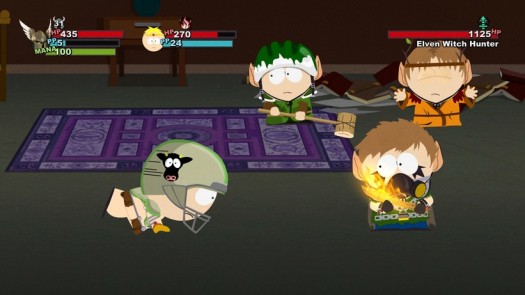 The Stick of Truth manages to fit every aspect of the show's seventeen seasons into this game. Just about everyone you've come to love is in this game, from the Underpants Gnomes and the anal-probing aliens to Satanic woodland creatures and Al Gore spouting about ManBearPig. If you've been a life-long fan of the cartoon, there will be many moments of smiles and laughs to be had while playing through this game. It's the funniest licensed-based game ever made; it's also the dirtiest.

Parker & Stone push the M-rated barrier to its limits, sometimes to shocking levels. In one instance Douchebag is shrunk down to size and battles a Gnome as his parents, in the nicest way to possibly say it, fuck each others' brains out above them. You pretend to give Randy Marsh an abortion, and crawl up the anus of Mr. Slave to disarm a bomb. In one funny Easter egg you can walk in on a guy having sex with a horse. If any of this was put into either a Saints Row or Grand Theft Auto game, they would've been slapped with an AO rating faster than it takes you to find Jesus in the South Park Church, but because it's all in paper-mache-looking animation I guess it's okay. 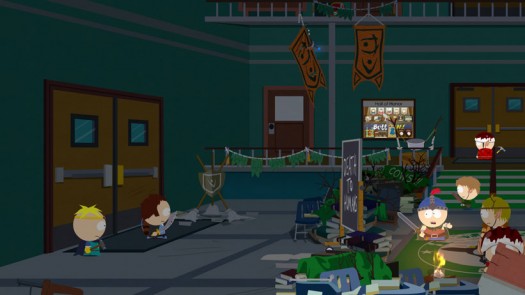 This leads me to the game's graphics, which look exactly like you're playing the TV show. The movements, the action sequences, and even the town itself plays like it would if you tuned into Comedy Central to watch it. For Obsidian to finally create a game that makes you feel like you're taking control of an episode (or, in the case of its length, a season) of South Park, it's a true work of video game magic. It's when you visit Canada, though, that's when the young gamer in all of us will awaken to a glorious sight.

South Park's main voice cast is also on board, bringing to life some of the funniest dialogue you'll probably ever hear in a video game this year. Thankfully there's little repeated dialogue to be found, unless you find yourself standing there farting constantly until whomever you have helping you out runs out of things to say. The game's soundtrack, which features such classics as "Sexual Harassment Panda" and Chef's love ballad "No Substitute", along with some nice orchestral pieces, fit well with the action that takes place. 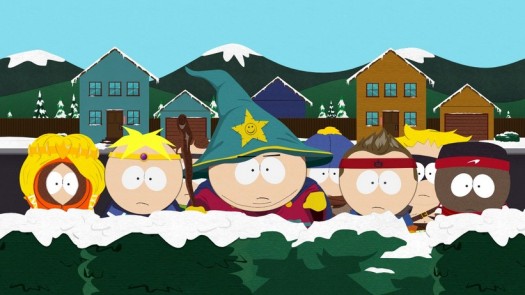 There are a couple of downsides to The Stick of Truth, though. For one thing the area of South Park is somewhat small for an RPG title. Usually when it comes to games like this you're expected to travel across large terrains, but it will take probably ten minutes to walk all over South Park. Then there is the length of the game, and while you can complete the game and its side-quests in around 14 hours (a lot of time for a game) for an RPG it's kind of short. (Ni No Kuni, in comparison, took 80 hours to complete the entire thing.)

Finally when you've completed the game and their side-quests, there's nothing much else to do except walk around the town. There's no New Game+, nor is there a way to reopen the Easter Eggs or revisit select chapters of a game. When it's done, you're done (until the inevitable DLC comes out).

South Park: The Stick of Truth stays true to the game, all thanks to Parker & Stone's involvement throughout its creation. It's loads of fun, filled with plenty of laughs, not to mention some great nods to the show's past. The Stick of Truth is one of the best licensed-based titles since Batman: Arkham City, and while it runs short your visit to South Park will be worthwhile.