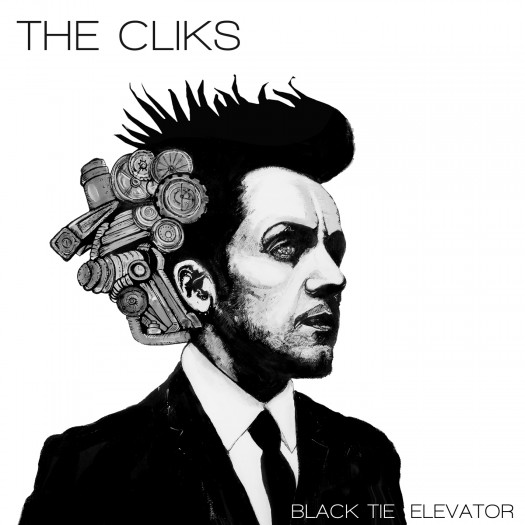 Produced by Hill Kourkoutis (who also sat behind the controls for Lucas's solo cover album Mockingbird) Black Tie Elevator sounds as if it was recorded in a seedy New Orleans blues club, where the drugs are cheap and the ladies come with a price. In other words: a near-perfect spot to tell the tales of an adventure to the underworld. Gone are the rock and punk riffs from Snakehouse, as are the love stories heard in Dirty King. Instead The Cliks sit at the table where B.B. King and the late Stevie Ray Vaughan eat, embracing the blues aspect of rock to the fullest extent.

In "Dark Passenger" Lucas croons to his wildest content as he contemplates whether or not to forgive a tall, dark stranger that has taken advantage of him. It's a slow track, but it knows how to caress the listener and whisper bitter secrets that are almost impossible to keep to one's self. "Walking In A Graveyard" lets Mr. Silveria become a character that blends Cab Calloway's cryptic lyrics with Jim Morrison's attitude, heeding warnings to everyone that all will be six feet under if the bad things in life keep getting in the way. He may not be the Lizard King, but it's one of the rare times where Lucas becomes a reptile while having some fun at other people's expenses. "She Was The One," on the other hand, showcases the laments he once had for a strong woman that he fell for in a weaker state.

A sample of the tracks from "Black Tie Elevator"

Both "1000 Violins" and "4 Letter Words" tread back to Lucas's past discography, while keeping the ease of the band's new sound. He's in love, and he wants the world to know that someone has finally stolen his heart. With additional vocals from his fiance Skye Chevolleau on both tracks, it becomes a carousel of happiness that has never been showcased on a Cliks album before. Lucas's once-angst persona melts away, revealing someone who is finally glad to be in the place they're currently in.

Older fans of The Cliks may be turned off by their new sound, but those with eclectic tastes and a love of an older rock sound may find lots to like about Black Tie Elevator. Just as Lucas has evolved into the person he is today, The Cliks have transformed their sound into something different and, above all, comfortable. It's the type of music that goes well with a good drink in hand and a relaxing atmosphere. Black Tie Elevator is not just lounge rock in the loosest of terms, it's also a good change of pace for a band that's been through plenty of highs and lows. Mark this album as a definite high.

Black Tie Elevator will be available in stores this coming March. A review copy was provided by ILDK Media.

For a blast from the past, check out the very first episode of our "One-On-One" interview program featuring The Cliks!