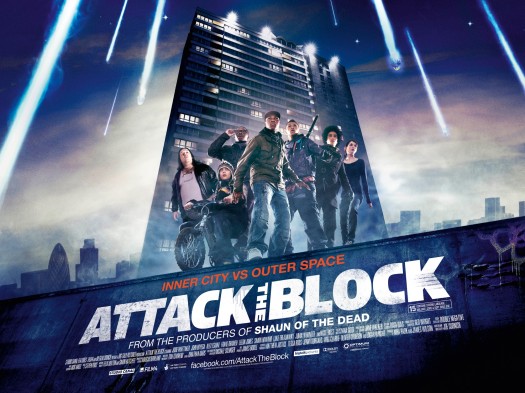 Attack The Block is another movie to add onto my wall of fame movie shelf. This is an awesome movie where a gang of kids go from being the scumbags of the streets they live in to the heroes of the day. (Believe me: if I dealt with this situation in real-life, I wouldn't be running around with a katana, baseball bat, a small knife or any other crappy tool to take on these invaders.)

In all honesty I thought it was going to be all silly fun going into this movie, seeing that it's produced by the guys that did Shaun of the Dead and has Nick Frost as one of the characters. After watching it Attack The Block is not as funny as it could've been, although there are some funny parts in this film. It seems to have a more serious style of British humor that I haven't seen before. However I still think this is a very good movie that was put together, but it's too bad it wasn't in theaters on our side of the pond.

The movie focus on this boy Moses (John Boyega), who is the leader of the group of kids that like to do the normal wannabe gangster play-around. They mug people and run around and cause multiple shenanigans. One night they attack this lady named Sam (Jodie Whittiker), who is coming back from her long night of work at the hospital. While this mugging is going on a light comes from the sky and hits the car next to them. Moses, the brave one of the group, looks into the car, not thinking that it's anything of importance. After thinking of stealing things a small creature attacks him, scratching his face. The creature runs away, but instead of the kids thinking they should of left it well alone, they decide to go after the creature and kill it.

They bring the alien to Ron (Nick Frost), the local supplier of weed who works under this crazy Somali pirate-looking guy. Ron keeps the alien from the kids, and makes Moses one of his own to take care of transporting illegal drugs. The group of kids start to head out, and Moses gets captured by the police. The cops then wind up getting killed by these dark monsters that seem to be completely black, with no eyes and glowing blue mouths. (Believe me: Attack The Block has got some scary-looking aliens!) Low and behold the kids are able to get away, with Sam in the back of the police vehicle that they drive away in.

From that point on everything to seem to get worse in the alien department, as they seem to want to keep going for Moses. He goes back to Ron's flat and finds that a black light they had used for growing the weed lit his jacket up like a Christmas tree. Apparently the first monster had a bunch of pheromones that got on him after they stabbed it with a knife, which made sense for the other aliens to go after him and find him with ease. As the movie goes on you basically see Moses go from a boy to "the man" of the block. His street cred and popularity goes up by the end of the movie, making it seem unreal how bad ass this kid really was.

Althought this didn't have the usual setup that Nick Frost has done in the past with his cohort Simon Pegg, it seems that this is just another great movie to sit back and watch for the action, drama, and comedy. I'm not saying this movie is for everybody, especially when the kids are talking in the British street slang. Half the time they aren't even completing full sentences, so you may get confused by the way they talk. It does make it all that funnier due to the fact they spawned the English language, but can't really speak it to save their lives. So if you have Netflix DVD, I say pop it in your queue list and watch it.

P.S.: if you don't know what other movies I were talking about between Frost and Pegg, check out the videos below.

Tags
Attack the BlockblueonicMoviesNick FrostreviewsShaun of the Dead
Previous Article