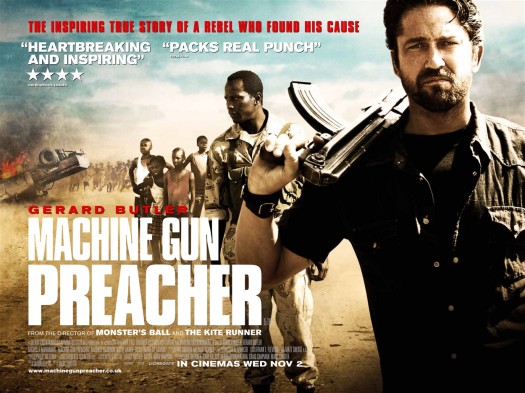 The title Machine Gun Preacher pretty much explains the whole movie. Gerard Butler plays Sam Childers as someone who got out of jail and was still a troublemaker. One day he opens his eyes to religion, causing him to go on an epic crusade of his own.

Now for a person such as myself being an atheist, I can say that I saw the title, saw that Gerard Butler was in it, and figured it sounded like a pretty awesome movie. I can only think of the movie as something that looked like a joke. From watching it, I come to find out the story is based on an actual person. The film portrayed him as a person who was not so nice of a guy from Johnstown, Pennsylvania. He gets out of prison and automatically really messes things up. He yells at his wife to go back to her stripper job instead of the grocery job, but she turned over a new leaf and now believes in God. Childers does not like that, and ends up hopping on his motorcycle and driving off to the biker bar to meet up with his junky friend Donnie.

He meets up with Donnie, does some drugs, and goes out and do what druggies do best: get into shenanigans with kicking peoples doors down and stealing other people drugs and money. Then an incident happens when they pick up a hitchhiker, and Sam ends up stabbing the guy due to the fact he pulls out a weapon. (Remember kiddies: it's a bad idea to pick up hitchhikers!) They toss him out to the side of the road, and Childers goes home to grovel in the bathroom and clean the blood off his shirt. His wife walks in, and he ask for her help. Time passes, and he ends up going to church with his wife, gets baptized, and -- as they say -- "find God." He starts working for construction, but then gets pushed off because of lack of funds. That night a tornado hits the town, and the contractor that was using him comes to ask him to work for him, but instead of just working for him. He instead makes a deal to go into business with him.

After a little while he goes back to the bar. Just when you think he's going to become a junkie again, he takes his friend Donnie back to his house and detoxes him. With that Sam is at the church, and one of the people that goes to Africa to help children and people of Africa really strikes a chord with Sam. He decides to go over to Africa and see what's going on. Of course where they went to help kids, there isn't much going on and he's helping build stuff. He goes and talks to the two guys that are of the Freedom Fighters. He ask if they can bring him up north to Sudan, and when he gets there he sees the worst of the worst: kids that have been injured by mines and gun shots, with severed limbs and other grotesque injuries.

The other thing is when he's staying there he see's that all the kids are coming from all the other villages. He sees that they are sleeping outside, and decides to bring them inside. The reason for this is the kids are trying to make sure they don't get captured from the leader Kony. Sam goes back with the kids to their village, and there is a a lot of devastation within the village. He even see a kid run after his dog and ends up stepping on a mine! This really messes with Sam, and when he went back home to his wife and kids he kind of felt this moral obligation to take care of those kids. Sam ends up staying up at night, and draws up blue prints of the place he wants to build for the kids. He returns to Africa and starts helping these kids. Unfortunately he ends up getting into a firefight and loses the building in a blaze.

I have already given way too much information, but if you need some inspiration of a guy that went from a crappy life to being a pretty damn awesome human being, then Machine Gun Preacher is your movie. It's got a great power struggle that a lot of movies of this caliber don't have. but by watching this film I was drawn in by it. You want people to be happy, but sometimes trying to do the right thing can get people killed. With Sam Childers, however, he was able to kick ass and take names while chewing the religious bubble gum.

Here are some words from Sam Childers to leave you off: