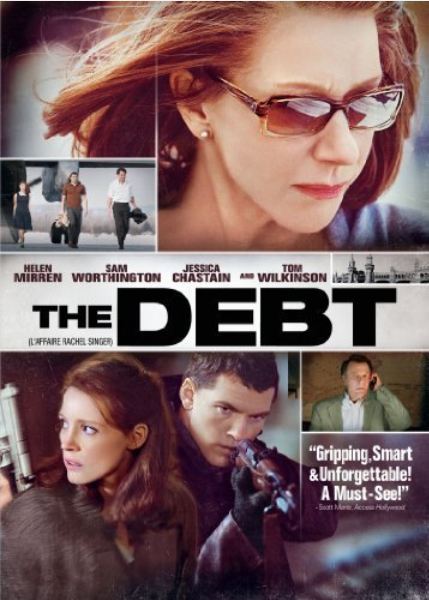 Recently The Debt popped up On Demand, a film dealing with Israeli secret agents trying to capture the Nazis that got away from Germany before being prosecuted.

To start this off this is not based on a true story, although it may seem close to what would be the actual truth. You can almost compare this movie to Munich (who has Eric Bana and Daniel Craig), which is based on a true story. From watching the trailer you learn about the three young agents who went into the field. Their assignment was based on obtaining this one Nazi war criminal named Dieter Vogel (played by Jesper Christensen), who was the worst of the worst. He apparently did experiments on all the Jews/POWs and other captured individuals back in World War II. The whole issue or problem these young agents is that they're facing the failure of their mission back in 1965.

A piece of the story is being told through Rachel Singer (Helen Mirren). She reads at a book launch, as her daughter had written about how her parents had taken on this mission. As the story is read it kind of goes through what is a version of the truth, which states that she had killed Vogel. Before she is doing the book reading the older David Peretz (Ciarán Hinds) was being escorted to a vehicle. Peretz decides he doesn't want to go, so he jumps out in the middle of the street and gets killed. (I have to say was a hard thing to watch because you don't know why he actually did it.)

The film bounces back and fourth between the characters in the present and the past. To add another thing about the doctor is he didn't completely leave the area. He ended up being a doctor in the Soviet Occupied East Berlin. The main reason for the three agents, two being male and one being female, makes the difference. The Head agent Stephen Gold (Marton Csokas) is the one running the show, and still does when he's a lot older. The next male spy is Pertz (Sam Worthington), who not only is the back up but also has to hold onto the secret that happens between the spies. The female spy is Singer (Jessica Chastain), who is the one that goes in for the check up at the doctor's to gain intel. The second time they go they give the doctor a shot that makes it look like he was having a heart attack. The two male spies are able to cart him off posing as EMTs.

The rest of the movie is where it gets rough. They aren't able to get the doctor out due to their pick-up being canceled, so they find themselves in the perdicment of trying to bring the doctor home alive so that he can be given a trial. The spies also have to figure out if it's just better to kill him and get out of East Berlin while they have the chance.

The Debt is done very well, and it's a great little spy movie. However it can be a bit predictable at times, and it can lose you a bit due to the jumping back and forth between the reading and the actual events. Still I recommend checking it out.

Episode CLVI: Side Effects May Inc...