First you couldn't escape from them on the ground. Then you couldn't swim fast enough from them underwater. Now they've taken to air travel in Hothead Games' latest title Zombie Ace.

Released for iPhone and iPad (with a Google Play version coming soon) Zombie Ace is a touch-based game that has you take control of a plane under the influence of zombies. As the pilot of your undead plane it is up to you to take out enemy aircrafts, collect zombie coins, and land at various spots such as San Francisco and Washington, DC to spread your virus across the country. 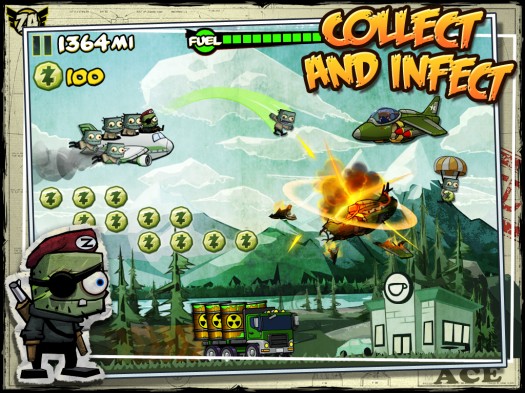 In order to fly in the game you simply touch the screen to soar high, and then lift your finger up to glide down. When you come across an enemy aircraft you touch it and launch as many zombies as you'd like at it to take it down. Be careful: you'll lose a zombie if you don't recollect him after taking down the plane.

Throughout Zombie Ace you will also earn upgrades that will help you through your travels such as Auto-Pilot (which will start you off at a city you've already infected), Well To Hell (launches unlimited zombie robots to take down enemies), and Magnet (attracts coins and zombies throughout your current area). These upgrades can be earned by gliding towards a toxic waste truck, or by collecting Brain Scratcher lottery tickets. You can also upgrade your plane's biggest necessities (fuel, speed, flight height, zombie capacity & passenger style) with the zombie bucks and brains you've collected, as well as earn better pilots and aircrafts. However it will take time to upgrade to the highest capacity, as the prices do skyrocket after the first leveling up. 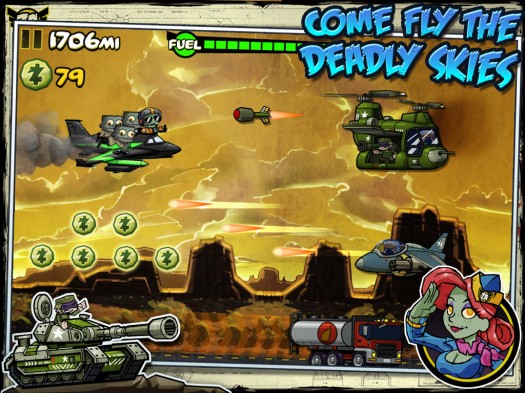 As an iPhone/iPad game Zombie Ace entertains as much as all the other big app games such as Angry Birds and Death Rally, and its cartoonish look is very easy on the eyes. Hothead Games is known for creating some funny titles like Swarm and the DeathSpank series, so it's no surprise that their humor is still intact here in Zombie Ace. The goofy look of the zombies will put a smile on your face, and the overall gameplay aspect will have you in stitches.

Zombie Ace succeeds in doing what it sought out to accomplish: helping the undead fly and the gamers smile as they cause anarchy throughout the American skies. You can expect a lot of hours clocked into this game as you try to earn all the upgrades and spread your zombified love across the good ole USA. Oh, and did I mention that this game is free?