What inspired you and Haley Esposito to start your own production company?

Haley had this genius idea for a web series that involved a lot of music, and I immediately jumped on board. After a few meetings we decided to produce it ourselves and start our own production company.

Where does the name “Heal By Rain” originate from?

It's actually an anagram of Brina and Haley. We also both love rain, so it worked out quite well. 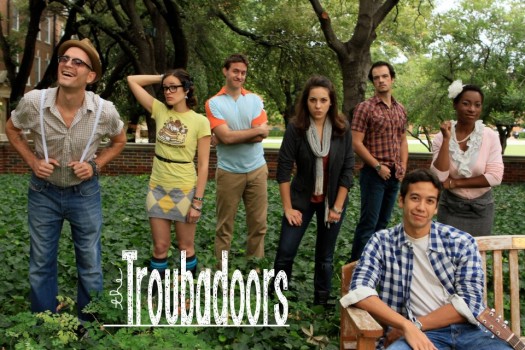 You just announced your first web series called The Troubadoors. What was it about this idea that made you choose it to be Heal By Rain’s first production?

Like I said, it was Haley's idea originally. I was drawn to it because I thought the concept of people singing door to door, not on Christmas, was hilarious. I also loved that it would give me an outlet to write music. As we continued fleshing out the story and characters, I just fell in love with it all over again. It's a comedy with a lot of heart.

How will The Troubadoors stand out from other shows that focus on choirs and choruses like The Sing-Off and Glee?

While I think both of those shows are great, what sets us apart is our music will be much more folk based. All of The Troubadoors' instruments will have to be portable, too, which gives it a very un-produced and honest sound. The rival choir, The Harmonics, will be just the opposite of that. Their songs will be much more dance based and auto-tuned.

Is your character of Kagura based on anyone you know?

Not really. I suppose she's an amalgam of every con horror story I've heard in the past, mixed in with myself. As crazy as she is, I still find her to be a very relatable character. She is misunderstood and trying desperately to find herself. Who can't relate to that? And, yes, she's also a bit obsessive...

How many original songs were written for The Troubadoors?

When it's all said and done, there will be a minimum of 15 original songs for the first season. They have not all been finished just yet.

Where did the idea of doing video diaries for each character come from?

It was our way of not only introducing the characters to our audience, but to the actors as well. We want our characters to have a lot of layers and depth, even though it is a comedy. Getting to improvise as your character is a great way to explore and find those different levels. We thought it would be a good way to build buzz about the show, as well.

Be honest: on average how many takes did you have to do for these video diaries? I can’t help but imagine that you all couldn’t go straight-faced for these just in one take.

It was extremely hard for Haley and I to not bust out laughing on every one of those video diaries! All of our actors are pretty pro, though. They rarely busted a take.

How many episodes can we expect from the first season?

The first season will have 14 episodes.

After launching The Troubadoors, what else can we look forward to from Heal By Rain?

We have a lot of ideas, but for right now we're completely focused on making the best web series we can!