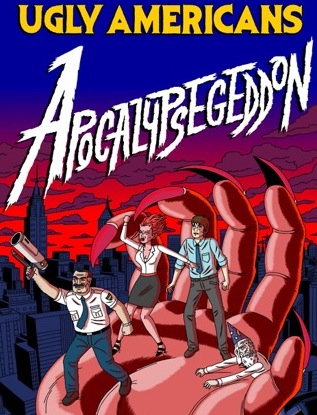 Ugly Americans is one of the funniest cartoons to come out stateside, thanks in part to its inventive characters, humorous storylines and one-liners. When word got out that there would be a video game tie-in called Ugly Americans: Apocalypsegeddon coming out for the PSN and Xbox Live Arcade I got genuinely excited. Alas, my excitement died down quickly when I started playing it.

In Apocalypsegeddon more Hell than usual is breaking loose, thanks in part to Callie's recently-discovered half-sister getting married to Twayne and causing the start of armageddon. Throughout the game she, Mark, Leonard and Grimes battle it out with man-birds, zombies, demons and other strange creatures that roam New York City on a daily basis. With a never-ending supply of weapons -- ranging from baseballs and lamps to demon heads -- the protagonists of the show do all they can to stop the end of the world...until a proper date can be determined by the Maggotbone family. 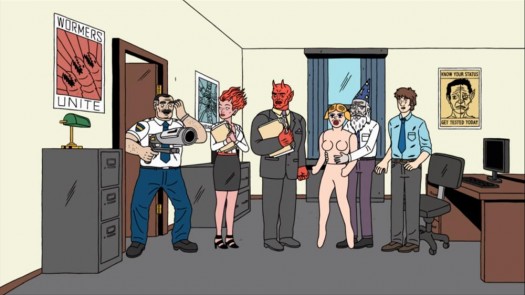 At first look Apocalypsegeddon looks like a finely-made video game version of the cartoon. The characters are brought to life in such a way that they appear to be perfect 3D rendering of the Ugly Americans world. With the main voice acting cast onboard the title even sounds like the show. Unfortunately while playing the game itself the one-liners get old fast, due in part to them being repeated over and over again. (I can go through the rest of my life without having to hear a man-bird scream "Suck my balls!" ever again, thank you very much.) What's worse is that, while funny, the cut scenes are done in a storyboard fashion, and not fully animated, taking away some of the cool aspects of the animated series itself. If there is one thing I can't stand in the gaming world, it's seeing companies cut corners in the FMV department.

In the game you and three co-op/online players take on eleven side-scrolling levels and battle it out with a vast amount of creatures. Some take easy hits to kill, while the bigger ones take time to defeat. To shoot you simply aim the right control stick in any direction, which will then let your character start melee blasting. The R1 button can also be used for a more powerful special attack. While it is an easy-to-use control scheme it gives way to one of my biggest complaint about the game: it's too repetitious. You can just keep on shooting throughout the levels, not having to stop at all. It also doesn't help that the enemy AI seems to only do the same three things at all times: chase, attack or throw stuff at you. 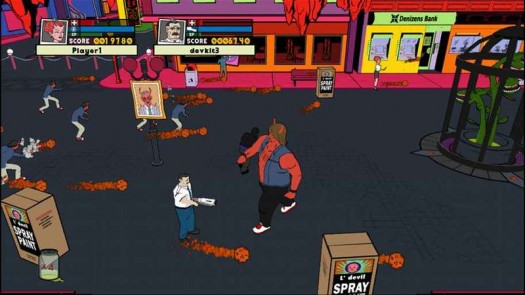 The only redeeming quality that Ugly Americans: Apocalypsegeddon has is that if you are playing with two or more players there will be more enemies to kill to raise your score, though depending on what kind of baddies you face that might act more like a hinderance than anything. However this aspect can lead to much on-screen confusion. Many times did I lose track of my character, only to find it being beaten to death by the enemy AI, forcing me to start the level all over again. You might want to play by yourself before you invite others to join, until you get used to the game's surroundings.

Now comes the worst part about the game: it's under two hours long! Even playing alone I found myself beating each level below the ten-minute mark. With there being little-to-nothing to go back for replay value-wise it seriously makes the $10 price tag a complete and utter rip-off.

As a cartoon Ugly Americans is one of the funniest out there. As a video game, however, Apocalypsegeddon is a massive failure of a joke. It is to be avoided like a group of zombies that wish to feast on your brains. Any fan of Ugly Americans would feel betrayed after playing this, and if you want to continue liking the series it'd be best to pretend Apocalypsegeddon didn't exist. 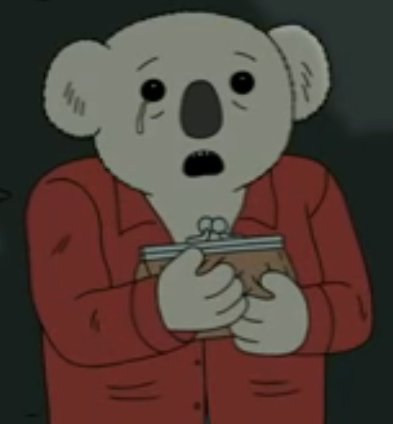 So awful it made Doug cry! (On second thought, everything makes him cry.)