Literally at the center of PAX East showroom was Turtle Beach, one of the top headset companies in the world. Throughout the weekend the company was holding tournaments with the fellow con-goers, giving out prizes that included some of their high-profile products, including their crown jewel known as the PX5.

While I didn't partake in the contest I had the chance to try out one of their headsets whilst playing Marvel VS Capcom 3: the Ear Force X11. While it didn't cover the entire ear to block out the surrounding sounds of the convention it both fit comfortably without pressing down too hard on the ears and managed to have the sound of the game come in clearly through all the noise of PAX. After tinkering around with the game it was time to meet up with Christopher Bridle, Turtle Beach's Senior Community Marketing Manager, who showed me two of their latest headsets. 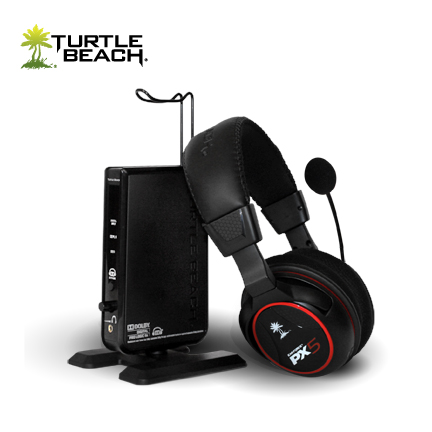 The "brand-new revolutionary headset" PX5 for the PS3 (also for Xbox 360) is a programmable 7.1 Dolby Digital Surround Sound wireless set that enables a fine customization of game, chat and mic volume. If you don't want to hear the twelve year-old from Germany whose kicking your ass in Super Street Fighter 4 badmouthing you, all you have to do is turn the chat all the way down without having to worry about losing the main game volume. Along with the Dolby clarity comes the power of Bluetooth technology, which means you can connect your cell phone or music streaming site with the PX5 while gaming or watching a Blu-Ray film. In laymen's terms: the PX5 is the ultimate audio multitasker. The other headset that Bridle showed me was the Ear Force X41, which currently runs about $50 cheaper than the PX5 and was the top Turtle Beach model for 2010.  The only difference it seemed between the two was that it didn't have the Bluetooth capabilities. Below the main headsets was Turtle Beach's collection of Bluetooth ear pieces. Its Ear Force PBT was specialized for the PS3, but with a single press of a button you could also sync it up with your cell phone. 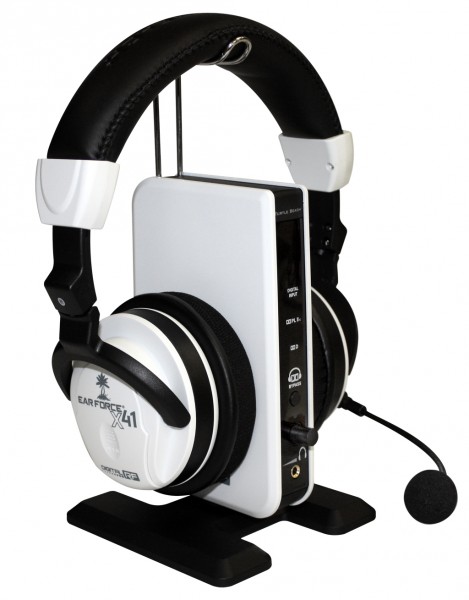 Most important about Turtle Beach is the comfort level of its headsets, and while some tend to either be too loose or tight (or start pressing down too hard on the ears after a couple of hours) the Turtle Beach ones are both easily adjustable and fit nicely over the ears themselves. What's also good about these wireless sets is its battery time. The PX5 holds a fair charge for 15 hours of gameplay, whereas the X41 lets you game out for up to 25 hours. Battery type also differs for these two, with the X41 using AAAs and the PX5 using AAs; one key difference being that the PX5 can also use rechargeable NiMH batteries, which will save users from forking over the cash for new batteries every time they die down. So while the PX5 may be the more expensive headset you might be saving more in the long run by buying it with the rechargeable batteries. The only thing I wasn't able to test out was the quality of the mic on the headsets, which would be difficult to do at a convention. 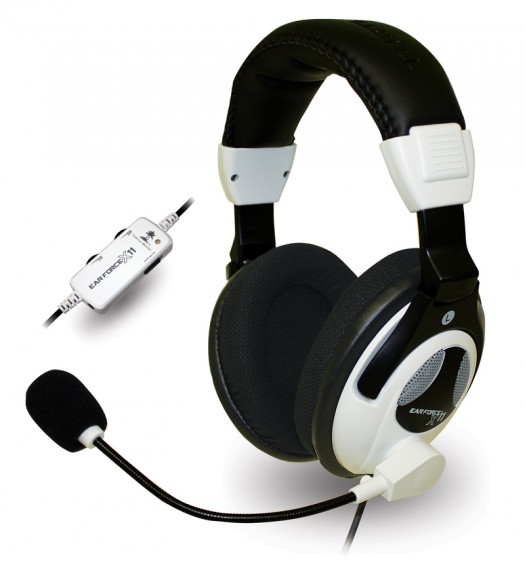 The sheer power and comfort of Turtle Beach's headsets appear to be perfect for those wanting to game at long lengths, as well as listen to films and television series in perfect 7.1/5.1 surround sound. Seeing many of the booths around PAX East using the Turtle Beach headsets -- compared to last year where their competitor was practically in every booth -- went to show that the company has gained a much broader following within the developer community. Now it's all about the gamers themselves, and after looking at some of the reactions from people using the Turtle Beach headsets there should be plenty to smile about for those who wind up buying themselves a pair.