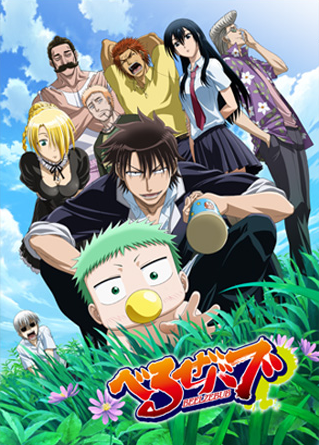 After watching four episodes of the new anime comedy Beelzebub, I keep finding myself asking the same three questions about this show: Why is the premise done to death, why do I keep watching, and would someone put a freaking diaper on that baby?!

The answer to the first question is obvious: it's a formula that works well with many fans of shonen anime. Take a tough guy named Tatsumi (Katsuyuki Konishi), put him in a school with the rowdiest of hooligans and make him the king of them all. Next add a green-haired baby hellspawn and make the protagonist father the kid for future world domination. Give the baby Pikachu-like powers, insert a gothic demon maid (Shizuka Ito) and a barbarian (Wataru Takagi) that looks like he came off the Olympic weightlifting team from the 1920s , and then finally give the protagonist a friend (Takahiro Mizushima) who is somewhat weak and only there to provide common sense commentary. Somewhat put them all under one roof, and let nature take its course.

There's more to the series, of course. The demon maid, who goes by the name of Hildegarde, was chosen to be the child's "Mother" soon after his birth by the baby Beel's father The Demon Lord. The strong-looking Alaindelon -- who contains strange dimensional transfer powers -- is sent to earth with the baby, whose father decides it is he who will bring the end of the world. The Demon Lord would like to do it himself, but he's busy with a 10,000 day Mahjongg tournament. (No lie: that's his excuse!) Also it turns out that if Tatsumi is more than fifteen meters away from Beel, he will raise an electrical temper so large that it will kill him almost instantly. 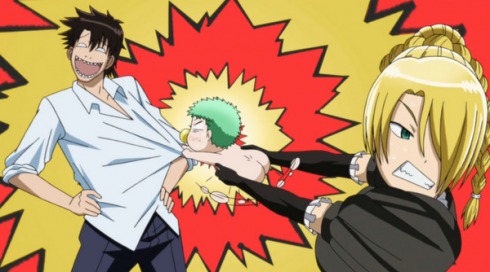 Even as I type this I realize how ridiculous of a show Beelzebub is, so why do I keep on watching it? To be honest: I'm not entirely sure. Perhaps the show has enough shits and giggles in it for me to keep coming back for more, even if it seems like they're doing the same jokes every other crazy shonen anime has done in years past. Maybe it's the chemistry between the characters, or it could be the humorous dialogue and commentary between Tatsumi and his weak friend Takayuki. I'll admit that the fight sequences are somewhat humorous, although they seem to last just a few seconds, and I especially like finding out that the tough guy Tatsumi is supposed to face off in a battle is nothing but a pansy hiding behind muscles.

I'm having quite the conundrum here trying to find my reasons for watching this anime, but in the end I see Beelzebub as a sort of entertainment that, while pretty dumb and overdone, still manages to have some very silly fun within each episode. There's no real reason to watch, it's just there for you to enjoy. Give the show a try on its Crunchyroll page, and if the fights, baby antics and crazy off-the-wall characters are to your liking, then keep on watching it. If not, then I won't be the person to judge your tastes, and advise you to watch something more original like Panty & Stocking or Squid Girl.

WARNING: This anime contains a naked baby throughout, and if you think they're gonna censor it like they do in your fan-serviced anime/hentai, then you are sadly mistaken. Seriously, where's Japan's equivalent to the DSS when you need it?

Episode LXXXIV: And Who The Hell I...