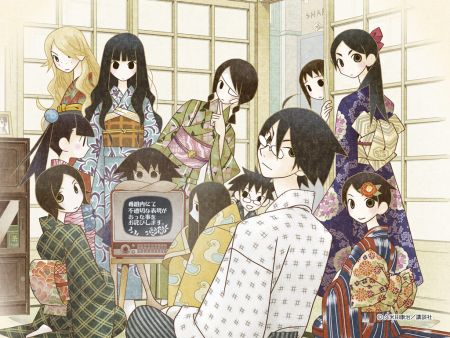 Pity must be given to the Japanese viewers who watch the recent season of Sayonara, Zetsubou-Sensei without a DVR player. There are so many hidden gags in the show that if they blink they’ll probably miss at least ten of them. In this case, that’s not a good thing.

The third TV season (fourth if you count the OVAs), Zan: Sayonara, Zetsubou-Sensei (meaning Repent: Goodbye, Mr. Despair) continues on with the gripes and worries of Nozomu Itoshiki, the suicidal teacher with the most screwed up students anyone can ever (not) ask for. This time he’s face-to-face with some of the vilest things in the world: good luck charms (where he’s arrested for being a potential bad luck charm for his studying students), switches (in which a flick of a personal one can lead people to do the opposite of what they usually do), and leap years to name a few.

Each episode is filled to the brim with Japanese references; too many for the average American to know, and quite possibly too much for the average Japanese viewer to understand. In laymen’s terms Zan is a show with a very tiny audience in mind. Of course there’re a few things that make the show funny for all. Episode five features a Blue Man Group allusion that will make anyone fall off their seat laughing, as well as the measles bit in episode six.  Unfortunately, this sort of humor is sporadic, at best. (There's also a well-timed Michael Jackson parody that aired a couple weeks after the so-called King of Pop's death, which is more hilarious than too soon-ish.)

There is one thing that people can count on when it comes to a Zetsubou-sensei anime: a kickass theme song, and it comes in the form of “Ringo Mogire Beam!” by Kenji Ohtsuki and the show’s female seiyuu (voice actor) crew. It’s heavy, dark, sweet, loud and in your face; the complete opposite of most anime series with a heavy casting of women. Heed this advice and listen to the song; but only watch the anime if you have either nothing else better to do, or if you want to try to have an aneurysm.  The fact that Zan: Sayonara, Zetsubou-Sensei is light-years behind the first two great seasons has left this reviewer in despair.