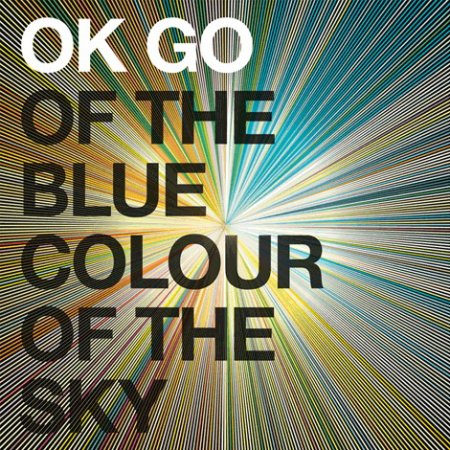 It has been over a year since I've had any involvement with King Baby Duck and Blueonic, but as time as gone by the pang of not putting out good music for the masses has become too strong. And here I am not as "Codename Brad," but as Leraine (or "Rain" for short). For those of you who don't know me I'm currently a Sophmore/Junior at Salem State College, and will be reviewing mostly books/music/manga. Of course I'll be taking request on what books and music I should review or may like and post up a review. Today we'll look at OK Go's recent album Of the Blue Colour of the Sky.

OK Go are one of my favorite bands in the world. For those who don't know who they are, just think back many years ago when YouTube first began and there was a video of four guys jumping around on several treadmills. That song you heard was "Here It Goes Again," a delightfully upbeat song with a unique music video all of its own. So several years later (eight to be exact) their 3rd studio album is released and here fans may ask themselves if it's the music they like or the band.

As you pop the CD into the music player of your choice, you are suddenly hit with the first track entitled "WTF?", and that is something I personally said to myself. This song from the start is a huge step away from their power pop and glam punk persona. It's a more gritty but back-to-basics track compared to "C-C-C-Cinnamon Lips" or "A Million Ways." However in this review being different doesn't mean we should treat this new song as something to be feared! No, OK Go has done their homework and didn't just put out a half-hearted CD with some experimental tones; they worked on this album! The breathy tone of lead singer Damian Kulash's voice -- accompanied by the deep resounding melodies -- is similar to Prince's style of singing, and is most likely inspired by the singer. This song is something that you can only understand if you're under the influence, which isn't something I say often about music. Not since Kid Cudi's song "Day and Night" has a song spoken so openly about being under the influence. This song will be sure to hook you into the album, but it's the next song "This Too Shall Pass" that knocks you out and brings you into a pseudo-psychedelic state sprinkled with rebellion. It seems fitting that it is the 2nd song on Of the Blue Colour of the Sky.

"This Too Shall Pass" and "White Knuckle" are also -- in their own right -- a step in the right direction because it isn't afraid to tell you what its message is and doesn't muddle it down with heavy undertones and symbolism. These songs are very similar to the Beatles' style of music, where instruments and vocals aren't pushing each other aside but instead opt to work together to relay a message. So since the base of the music seems to originate to classic rock, where do the lyrics stem from? Well this I do not know, but the message and tone reek of the teenage solidarity that was present in the late 80's and early 90's where life sucks, school is long and parents just don't understand! It is a song that reminds us that no matter how bad things may get this too...shall pass.

As I have said before OK Go's latest album is much different form their first two (OK Go and Oh No) which both were very upbeat and delightfully camp in the message they relay to the masses. I say Of the Blue Colour of the Sky is a strong, confident step in the right direction; one that isn't afraid to be seen wearing two different colored shoes and bright socks.

Episode XLVII: Is That Chocolate O...

I am a shy person at heart but my personality is like fire in a dry forest. Once I get to know you I warm up very quickly, I hope to make it in life being a psychologist. I like tempure, taco's, listening to music and hiking in the woods.