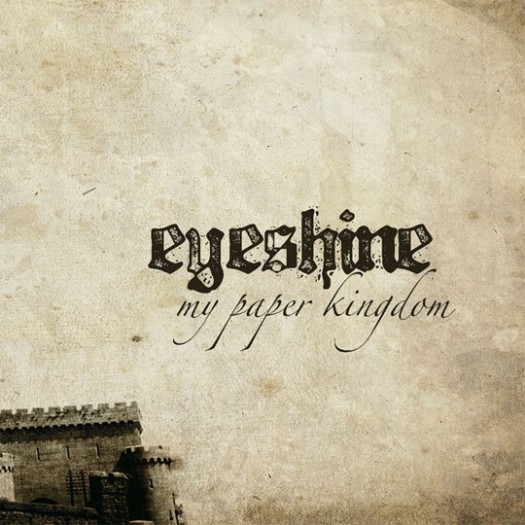 On their sophomore album My Paper Kingdom, Eyeshine takes the listeners through a place where a changing world can cause turmoil on any struggling musician. Where the failures of the present meet are where Johnny Yong Bosch and company tend to discover their biggest strengths.

Recorded after two members left before they could even start mixing it, Eyeshine's main focus on My Paper Kingdom tends to be on the power of their fanbase, as evident on the back-to-back tracks  "Never Gonna Fake It" and "Crush Me." The former comes off as an anthem for those not willing to give up even during the toughest of times; the latter serves up criticism to those that don't support their song beliefs in real-life. Here these two songs show off Eyeshine's biggest strengths in regards to both songwriting and performance. Why neither of these songs became a Top 40 hit is beyond baffling.

There is a lot to love on the rest of My Paper Kingdom, as each song showcases a valid strength from the band members. The opener "Break The Clouds" presses on the theme of hope that the sky is nowhere near the limit, and drummer Maurice smashes through his drum kit as if he'll launch himself into orbit the harder and faster he plays. The award-winning "Alone" has Bosch channeling the likes of Mark Lanegan and Tom DeLonge, using grungy vocals to bring into spotlight the pain many people feel when they're rejected by the ones they love. "Something More" brings forth the power of people working together to achieve their goals, and when moments of separation appear the soul knows that something is lacking. Simplicity at its best can be found in "Fighting," and lyrics like "It's not the same without you, I'm not afraid/To go it all alone without you" might've been Bosch's response to the band members that left him and Maurice hanging. Whether "Fighting" is a challenge to those former members or a realization that Eyeshine won't be as strong without them remains a mystery, though I highly doubt that it's the latter.

"Just Like The Others" comes off as a sort of understanding towards the people that never want to change for the better, and that breaking their association with these so-called friends is the only way to overcome the pain they feel when they're around them. The album closer "California Bound" focuses on the dreamers that give their all to become believers, a very positive message found in an album that tends to play around the joys and sorrows found in an ever-changing world. While many of the tracks here are well-responsive to the listener, only one song can be seen as a road block on this journey the album takes them. That giant speed bump is "Seeing Red," where Bosch sounds like he's struggling too hard to hit the high notes. Artists need to know their limits in regards to vocal range, and sadly this song shows what happens when a singer pushes themselves beyond their limit.

Despite that one track Eyeshine's My Paper Kingdom serves as a reminder that giving up and failing is easy, but persevering and succeeding is another world away. The band (who have recently filled the two vacant spots) accomplishes this with only a scratch or two, and manages to make themselves stronger in the process. Conquering the music world is tough, but with enough support and quality songwriting a band can reach the top of the mountain. Eyeshine is blessed with both, and their triumph in this hard industry could be but a chapter away.