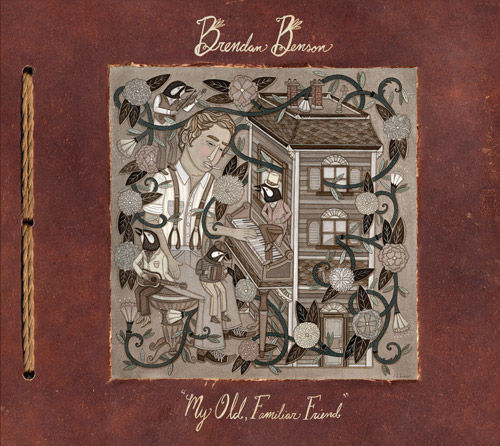 In 2009, after spending the last three years working with the Raconteurs, Brendan Benson returned with his fourth solo album.

My Old, Familiar Friend begins with “A Whole Lot Better,” a song that blends everything he learned from working with fellow Michigan man Jack White, and everything he knew before joining forces with him; making it a near-perfect opening track.  “You Make a Fool Out Of Me,” an acoustical romance track, hits the heart hard; and Benson gives it his all to sing to the one who is in possession of his heart.  Benson tries (and succeeds) in writing a song for people who both like alt. rock and dancing in clubs: “Feel Like Taking You Home.”  Its head-bopping beat will have anyone swaying their hips with joy.  “Poised and Ready,” a loud and rambunctious track, sounds as if it should’ve been placed at the end of the album.  However, the last song “Borrow” manages to be a good bookend to “A Whole Lot Better”: a conclusive sound that makes listeners beg for more.

Though there is a lot to like about the album, it does have a few missteps.  “Garbage Day,” though a nice ditty, is too over-the-top.  Perhaps if they had gotten rid of the string section it would’ve sounded more down-to-earth, but Benson seemed to want to go epic with it.  Unfortunately it’s anything but.  “Gonowhere” tries too hard to sound like a classic English track, and it suffers from lacking of any sort of originality.  Finally, there’s “Don’t Wanna Talk.”  It’s not a bad song, per se, but it suffers from the fact that there are already hundreds of songs that sound just like it; and for Benson to create a track like this shows that even those that try to go for an original sound sometimes have to get a track like this out of their system.  However it would’ve seemed fit as a B-Side than an actual album track.  The same can be said for “Misery,” but it has a few more original beats than “Don’t Wanna Talk,” so it does deserve some sort of place in Familiar Friend.

Those who only know Brendan Benson from working in White’s supergroup may want to research his previous solo albums (especially his debut album One Mississippi) before taking in this record.  Aside from that, Benson does a good job showing that, even before joining the Raconteurs, he can make a good record on his own.  Here’s hoping that others jump on his bandwagon, for his solo star is finally going to shine bright with his Old, Familiar Friend.