Before reading further, click here to read the first part of the interview.

In 2004 Uematsu left Square-Enix to form the SMILE PLEASE production company. “There really wasn’t one reason for why I decided to move on,” said Uematsu, “but you can’t say that there’s no reason at all. For the most part it was because I was getting a bit older in the profession. As I worked with the company for over 22 years, the people I was working under had become younger. That sort of human interaction is a little bit harder when your bosses are younger than you…As I had gotten older I wanted to take those 22 years and reset them to start fresh.” In regards to the company’s name, “The act of smiling is the most happy you can be,” but then added that he got it from the Stevie Wonder song of the same name.

Somewhat outside of the video game music world Uematsu formed the progressive rock band The Black Mages with Square-Enix composers Kenichiro Fuki and Tsuyoshi Sekito. The band mostly covers songs from the Final Fantasy games, but adds a metal twist to the original compositions. “I’m a big fan of rock music, said Uematsu. “When I was younger I used to play in the rock style, but once I entered the industry it was harder to perform that sort of music. It lit something inside of me, and it made me want to produce that sort of music as a band.” There are currently plans to release a new album with the band, but the name of the band will be changed. In regards to this new band name Uematsu replied, “Please wait two more months.”

While Uematsu was a baseball fanatic as a young kid, he feels he’s lost touch on the current standings. “When I was a kid I followed baseball quite a bit in Japan, but as I’ve grown older I’ve lost track of the Japanese teams, and I’ve also not had the chance to see a lot of the American games played; but I think Ichiro [Suzuki] is quite talented. When asked about this year’s World Baseball Classic, he wonders why Japan is good at it. “I looked at the teams, and I felt that the American players had a lot of power during the World Baseball Classic. I then looked at the Japanese team, and noticed that the manager was the same age as me. It didn’t look like he was the main focal point, so it looked like that everyone that was working beneath him were working really hard to get to where they had to be.” And what are his thoughts on Daisuke Matsuzaka and Hideki Okajima? “I agree that Okajima is the best, but in Japan Matsuzaka was really good.”

Uematsu has expressed interest in returning to Anime Boston, but in a bit of a different way. “I really want to return, but cosplay.” What would he dress as? “Chocobo,” he said with a hearty chuckle. I suggested that he just cosplay has himself, to which he mimed a sign that would read, “I’m not Nobuo.”

As for future projects Uematsu is currently working on the soundtrack to the upcoming Level 5/Brownie Brown game title Fantasy Life. When one of the other journalists in the room asked about his latest children’s album 10 Short Stories (which is now available on iTunes) Uematsu had a big surprise for us all. He handed out everyone a copy of both the Japanese and English versions of the new album, rendering many of us speechless by this unexpected act of kindness. (A review for this album will be coming soon.)

With that the private press conference with Uematsu came to a fine conclusion, and while everyone was parting ways I managed to get Uematsu to pose for a picture for your viewing pleasure. 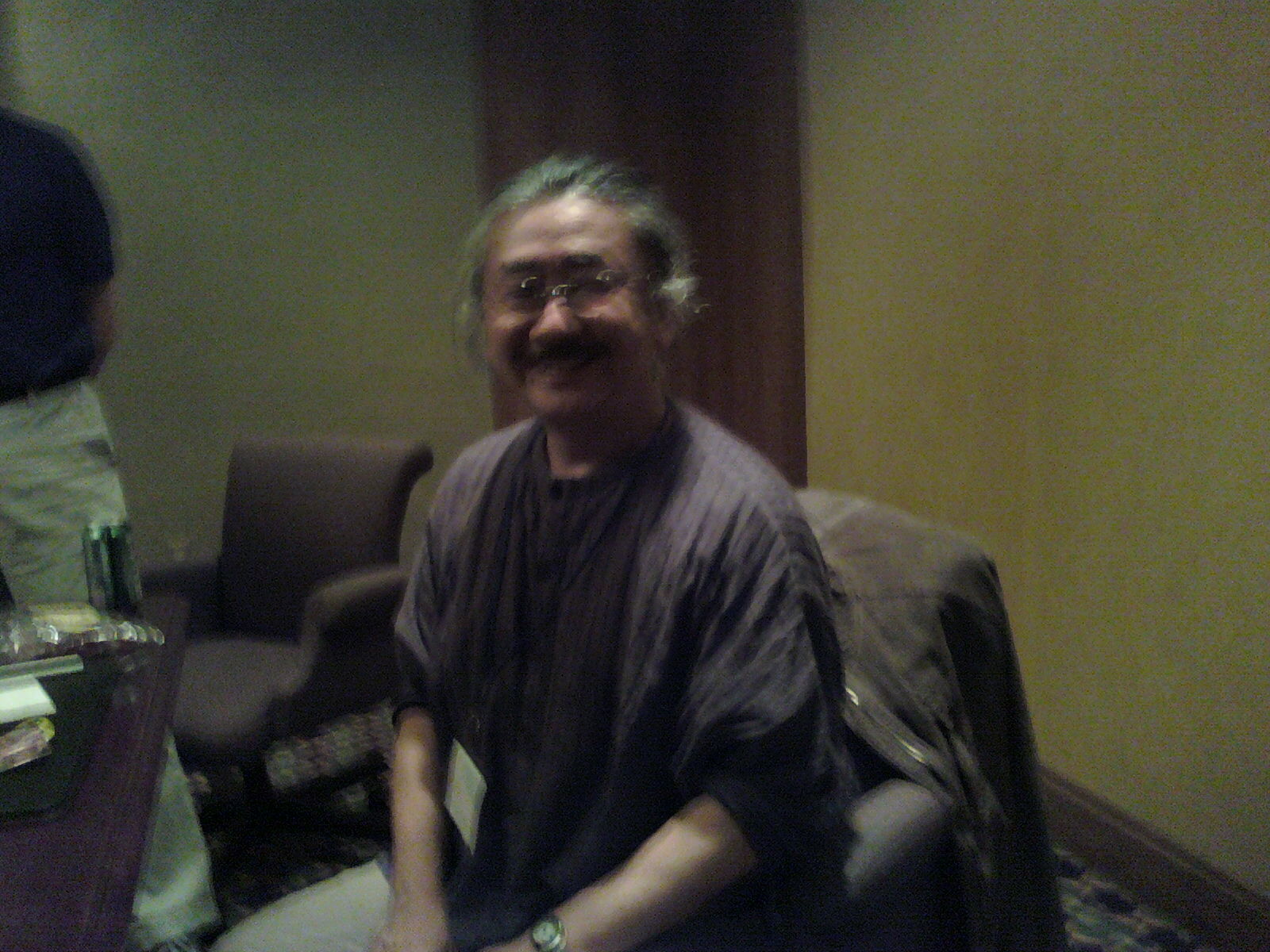 Episode XLIII: We Are The Losers!