HomeVideo GamesI Know I'm An Atheist, But This Game Sure is "PURE" 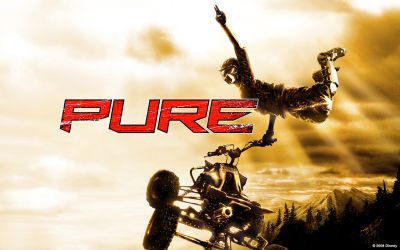 First off, you're probably asking, "Hey didn't this game come out in 2008?" Why yes it did; but seeing the holidays came and went I'm broke, and probably a lot of you are also broke (especially with tax season around the corner). But this is a game that I have been waiting to get down in price so I could buy it.  As you saw in my last article I did MX vs. ATV Reflex sucked.  I have to say that this game PURE beats the pants off of Reflex.  If you watch the video above it, you'll see the insane things that they have put into this game. You can literally build your ATV from the ground up, or should I say from the frame around.  These are the games I'm looking for, where the people have put time and effort into everything.  If you play this game you will notice a little fog feature they put on it, but it does make the game intense. 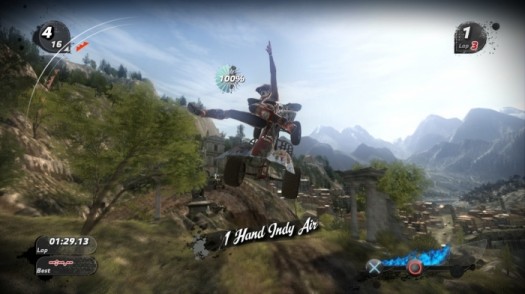 The shocker on this one is it's from Disney Interactive, which blew me out of the water when I saw that.  It's kind of strange how Disney is coming up with these kick-ass games. Another game that you can see at the bottom of this paragraph that is coming out from them -- which gave me a happy-gasm when i saw it -- is Called Split Second.  Yes I know it's another racing game, but this one is fucking sexy.  It mixes games up from Burnout, Stuntman Ignition, GRID (one of my personal favorites) and both Dirt titles just to name a few. These games I named are just generalizations of how the graphics are, or how the game is played.  However I do have to say you have to see the video below to believe it.

All right, back to PURE.  Now if you have watched the first video, that doesn't do justice for the game.  You will have to go out, get this game and try it.  If you have the Xbox 360 you should be able to look in the game demo section, download it there and give it a try.  I think what Disney Interactive and Black Rock Studios have done for this game will be done in the up and coming games that they are working on. PURE actually got me off the Modern Warfare 2 fix I was on.  Believe me: it was a good thing because it really has been a stressful time playing the online people (but I'll explain that in the next article I do on COD6's game and online play). 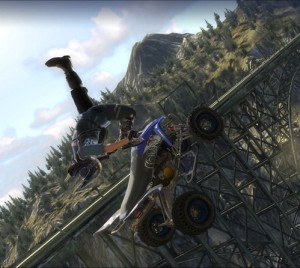 For those who love a challenge in the games of racing, well it's all right here.  I know it's not your MX vs. ATV with the monster trucks, or dune buggy racing which seems to be off the main subject of the title.  But without a doubt I can say that PURE has got me with two thumbs up.  To take a look at the characters in the game, they give them an actual background/storyline of why they race, and who they are.  When you play the MX game part, you just create your character and race around like a bumbling idiot.  The beauty of PURE is that you can do back-flips, front-flips and just the craziest all-out tricks that you probably couldn't do in real life.  The setup they have for doing tricks is a meter on the side.  First tricks are the easiest ones, where you use the A button on the Xbox controller while in flight move the stick to the right, left, up, or down so they do the tricks you want. When you build up the fire on the meter it gets you to use B, which has some pretty sick moves, but not as sick as when you get the meter up to Y.  Then once you fill the whole meter up, oh boy, I'm telling you it's a rush, you use the RB (Right Bumper), LB (Left Bumper) on the controller; and all I can say is hit a big-ass jump because these crazy tricks take a while, but they are just the fucking sickest tricks that could come to mind. Take that MX! You can't even do a fucking back-flip!  I know that PURE isn't on a realistic basis, but the setups they do for this game are all-out great.

The modes they have on the game is Free Roam, Freestyle, Sprint and Racing. The Free Roam I haven't done because I have been having so much fun with the tournaments, but when you get into the tournaments you don't want to get out.  Freestyle has the Gas Meter on it, so you have to keep going and doing tricks to race around the track hitting these floating circles that have specific things to help you bust out crazier tricks, and to keep you going longer than your competition.  For Sprint the racing is short (duh, that's why they call it "sprint"), so with that it usually gives you a short track of five laps to complete.  The racing in Sprint gets really intense, and the computer A.I. they put in this game I have to say impressed me.  The actual Racing part has massive levels and bigger jumps.  The races are only three laps because the courses for racing are a lot longer. This game also has online play, but I haven't tried it out; though I'm sure it does justice for the game (that's if people are still playing the game online). 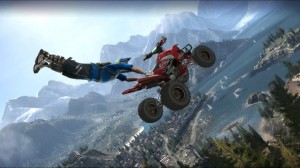 With PURE you will not be disappointed. It doesn't seem like there is a dull moment when you're racing, but I can say the only thing is when you're doing tricks, don't keep doing the same ones over and over for fuck's sake. They have so many combinations of tricks, that you really can't run out of them to do.  So next time you go into a store that has games, go and see if you can find PURE.  I got it online for under 10 bucks, and it also came with Lego: Batman, so i got 2 for one deal.  Find it, buy it try it out, and look forward to more games from Disney Interactive and Black Rock Studios.

Oh yea, forgot to mention that they really have some kick-ass music, and great artists playing in the background, making the game just that more intense.