This week Blueonic, King Baby Duck and Anvil went to the Five Guys restaurant chain. Here now are perspectives of the restaurant from all three of them. 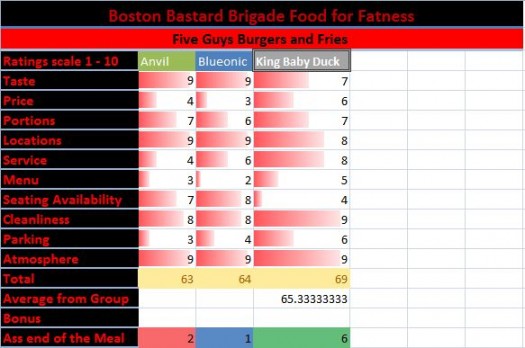 Anvil here. We went to the restaurant on Paradise Road in Swampscott, Ma and pulled into the small parking lot to look for a space. We entered the restaurant and waited in line to place our order. As we waited we looked at their small menu. They only offered hamburgers and cheeseburgers with or without bacon, French fries, hot dogs and fountain drinks. Once we got to the counter there was a man in his early 20's that looked like he didn't want to be there and wasn’t very personable. After we placed our order we waited in the small seating area for our number to get called, and you couldn't help but notice the music playing and the red & white walls and tables.

The staff preparing the food seemed happy to be there as they took the fresh burger patties off the grill and put bacon from a basket that had been there for who knows how long. They do offer a lot of free toppings for your burger, including grilled onions, mushrooms and even A-1 Steak Sauce. When our order got called we went to get our food, and the guy handing over the food was more engrossed in talking to his friend instead of seeing who was taking the food. We went back to the King's house to eat. The burgers were good, but lacked in size, and their French fries are fresh hand cut. We really enjoyed the food, but Five Guys is a place that you don’t go to often Since the food is on the expensive side. 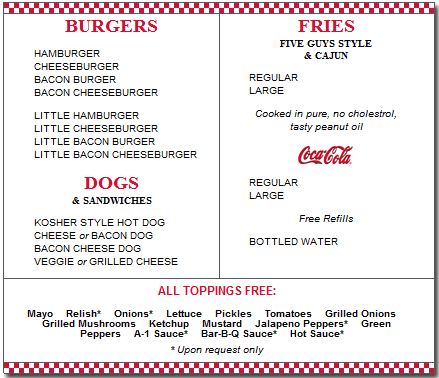 Blueonic here. Going to the Five Guys restaurant seemed like a treat, seeing we heard so many good things about the place. Also the company of Five Guys has been around for a while. Their history on their website says back in 1986, they started up in Arlington, Virginia. It seemed to have spread around in a “Cult Like following”, as it says on their website, which is making me wonder what they put into the meat.

I’m sorry, but after eating at this place my stomach was killing me, and I had a hard time controlling it from rumbling. I was wicked uncomfortable while doing the Podcast this week. If you listen closely you can probably hear my stomach in the background rumbling. All I can say is the nuclear holocaust that came from ass wasn’t pretty, and that’s why I gave it a low bonus on the ass end of the meal. I think it could have been the bacon on the burger, because it seemed that Anvil and I noticed that the bacon was sitting in a basket off on the side. Not sure how long it was sitting there for, but hopefully not too long, at least the bacon was crispy. The potato fries were pretty good, and it was good to see the bags of Idaho Potatoes when you walked in. But from looking on the website they say they use “peanut oil,” and that the menu said “trans fat free.”

The portions size of the meal were kind of small for me, seeing that it was two paddies in the double-bacon cheeseburger. But to compare it, it was probably just a little bit smaller compared to a “Big Mac”, “Whopper”, and “double stack” (Just in case you like the fast food burgers). But for Anvil and I put together what was spent was around 16 dollars for 2 double-bacon cheeseburgers and a large fry. The atmosphere was nice, and there were a lot of people inside. The parking sucked, and seeing that I’m the designated driver for the group I had to circle the building in order to find a parking spot. I would suggest trying it out just to see if you like the burgers, but we aren’t sure about the hot dogs. The menu could be bigger, but of course I don’t think that will happen seeing that they have had this tradition of burgers, fries, and hot dogs. You know, the real American dream food, which will fatten you up and clog the arteries. If you compare this place to Fuddruckers, I think Fuddruckers beats it out hand down, since you spend less for a bigger burger.

King Baby Duck reporting for the report. The three of us went to Five Guys with high expectations. After all it's won a few awards for its food and services, and it had quite the following from various food patrons. It took us a minute or two to find a good parking spot, and then a couple more minutes to place the order. Five Guys was almost near-capacity, though it is quite the small restaurant. I placed my order of a cheeseburger with tomato, onion, lettuce, ketchup and mayo with a large fry. The total almost wound up being $10. And that's without a drink! So far it seemed too pricey.

Wait time for the food was around seven minutes, which isn't too bad if you think about it. With the exception of the cashier everyone seemed happy to work there. (Though I won't take away points from the cashier. As one who has to ring up customers from time-to-time, I can understand the frustration of dealing with everyone who walks in there.) Once we got to my place we sat down to eat. My burger was well-cooked, and the toppings did not fall off the patty like so many other burger places do. I think I must've eaten that whole thing in under five minutes. Taste-wise, I've had better. I still prefer either Fuddrucker's or Wendy's over this burger. The large fry was served in a large cup, and there were so many fries that I had to wind up giving half of them to Blueonic to finish off. The flavor of the fries was pretty decent, and again I have to say I've tasted better. Not sure if I'll go to Five Guys often, but if it's the only place around when I have my burger craving I may just have to go in there again.

So with the awesome calculations done by our group from our mini-questionnaire, we all give it a big fat D to D+ Average. Sorry, Five Guys! Better luck next time.

Episode XXVIII: It Took An Army of...