The Good, The Bad And The Bullsh*t!

Posted 11 years ago by blueonic

I was chilling out with Anvil Saturday night, and we sat through three fights that were pretty damn good from Strikeforce. We were waiting for one that was one of the most anticipated fights that Anvil & I have dreamed to happen:  Gina “Conviction” Carano VS Cristina “Cyborg” Santos.

This has been almost a year in the making, due in part to both Showtime Elite XC falling out because it wasn’t getting enough publicity, along with Cyborg having an ankle injury. But Strikeforce rose to the occasion to take on the fight and hold the first MMA Women Championship. This match was the first time women have gotten to fight five minutes for each of the five rounds. This is the greatest thing I can say to happen to this sport, in hopes that there will be more women to come into the MMA fighting scene, along with giving them more classes to fight out like how the male contenders have it set up. I think that these two women fighters have set the landmark for women kicking ass and taking names.

With that I want to say that this fight started out intense, had me at the edge of me seat.  Sad to say it was only the first round, and it all went to shit for Gina Carano. It was like watching the fight where Kimbo Slice got knocked out in the first round in less than 30 seconds, except this was in the last seconds of the first 5 minute round. I know Gina is a strong person, and her record before this loss was 7 and 0. It was insane to see all her other fights that she had gone through, as if she had no way to lose. Plus with her not being able to fight for a whole year, she spent more of her time training.

For all those who've seen Gina Carano, she isn’t just another pretty face, she’s one that can back up the ass-kicking with her boxing/Muay Thai fighting style it is like an unstoppable force. With what I saw with Cris Cyborg, she has a background of Brazilian Jujitsu and that’s it, I believe, but with seeing how she fought it seemed like it was more of a cat-fighting style. I mean for fuck's sake she was clawing at the face. If you watch a video of it (which I will put up with this article when I find it) you can see as clear as day that Cyborg has her palm right over Gina’s face and was scratching into her. If you looked at Gina’s face after the fight was over you could see the indents from the nails of Cyborg.

If the referee was paying attention he would have brought the fight back to the middle stage, and either warned Cyborg or taken off a point.  After that then Gina would have been able to be hold her off till the next round.  I saw that Cyborg was close to running on empty, and didn’t seem to know how to fight. I was watching videos of how she was fighting in the other matches, and it was fucking bad how she would fight. Fists flying everywhere but yet no control. Hell I would hate it if I ended up in back alley with this woman.

But I have to say that there is something to Cyborg. I think she has way too many male qualities to her. I’m not hitting on the fact that she’s ugly, but for the way she moved and acted in the fight. A song comes to mind with the lyrics of “Dude Looks Like a Lady,” but all I can say is there is no way she could be considered a woman. But that’s just me, love me or hate me, but take a look for yourself and try not to cringe. 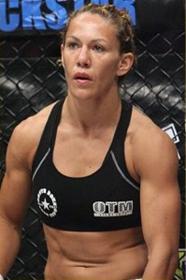 With that the fight ended up with Gina getting grounded and pounded into a TKO or Technical Knockout by punches, due in part because she wasn’t able to fight back. The referee stopped the fight just at the horn, which Anvil and I had the feeling that he heard the buzzer first and stopped the fight that way. But I think Strikeforce seriously needs to take a look over on these setups of how they ran this fight, and to watch every move from each angle on how Cyborg did some fucked up things in the match. But all in all I have to say it was a good fight, if at all possible, and I don’t know what Gina will want to do after this.  Maybe she'll get into some other fights with Strikeforce and kick some more ass, and then move up the ranks yet again to come up for a rematch and fuck up Cris Cyborg to obtain the title that is rightfully hers.

Side note: Why the fuck doesn’t UFC have a women fighting class? Is its owner Dana White not able to see the publicity that you can get from those matches? If White would open that up I bet that he could obtain Gina Carano, and that would mean that Gina would rule the UFC; until they can dig up another manish looking woman to fight her.