"Kannagi" Filled With Many Laughs 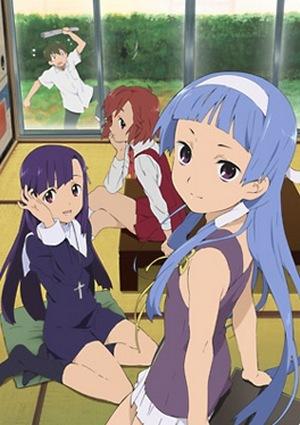 Bandai Entertaiment recently announced the release of "Kannagi: Crazy Shrine Maidens" just one day before was released on DVD here in America.  The real question, though, is if it's any good.

Based on the manga by Eri Takenashi “Kannagi” follows Jin, a student who is creates a carved sculpture of a shrine maid out of the wood from an ancestral tree.  All of a sudden, the statue explodes, revealing a beautiful woman named Nagi.  When Nagi realizes that Jin has made her from the wood of a sacred tree, she gets upset and kicks the crap out of him.  They return to the shrine where the tree once stood, and notice the impurities that have appeared around the stump of the tree.  Nagi defeat the impurities with a magic wand she creates after watching a magical-girl show on TV (you have to see it to truly get the humor of that scene).  Nagi poses as Jin's half-sister in front of his friends, and for awhile the gimmick works; until Nagi's twin sister Zange appears in the form of a nun (though there's nothing pure about her at all).  With the help of her friends Nagi goes all out to defeat the impurities, as well as doing her best to become an idol for the Japanese people.

What makes this show work very well is the fact that it breaks the fourth wall without having to do so.  It knows it's a TV show, but they just don't acknowledge it.  Some of the humor pokes fun of the regular Japanese otaku (including the character Akiba, whose name is a play on Akihabara, Tokyo's anime center), and it does it well without mentally flipping them off.  There are episodes that work very strongly (such as the one where Nagi gets angry at Jin and shuts herself into his closet, leading to a great punchline), but there are a couple episodes that don't quite come off as good as they should be (i.e. the Karaoke episode, though there is a good "Lucky Star" gag in there).

The whole concept of “goddess meets man and lives with him” has been done before in other anime series, but making the goddess a tsundere (a person with a conceited, spiky, combative personality that later on turns to being modest and loving) is a welcoming difference.  The animation in the show is well-drawn, and the colors are nice and bright; even for something that’s not high-def.  Director Yutaka Yamamoto does a fantastic job at making the series enjoyable from start to finish.  (After all, this is the guy who directed the first season of "The Melancholy of Haruhi Suzumiya.")  Anyone watching it can tell where the show will go (since it’s a romantic comedy), but "Kannagi" knows how to make the journey to that ending very interesting and funny.

If you want a show with good laughs, then "Kannagi: Crazy Shrine Maidens" just might be what you're looking for.  Even though it's not the best anime comedy out there, it's still worth your time and attention.  The first volume is out now, and the second volume will be available September 24.  Click here to watch the first few episodes on Anime News Network.