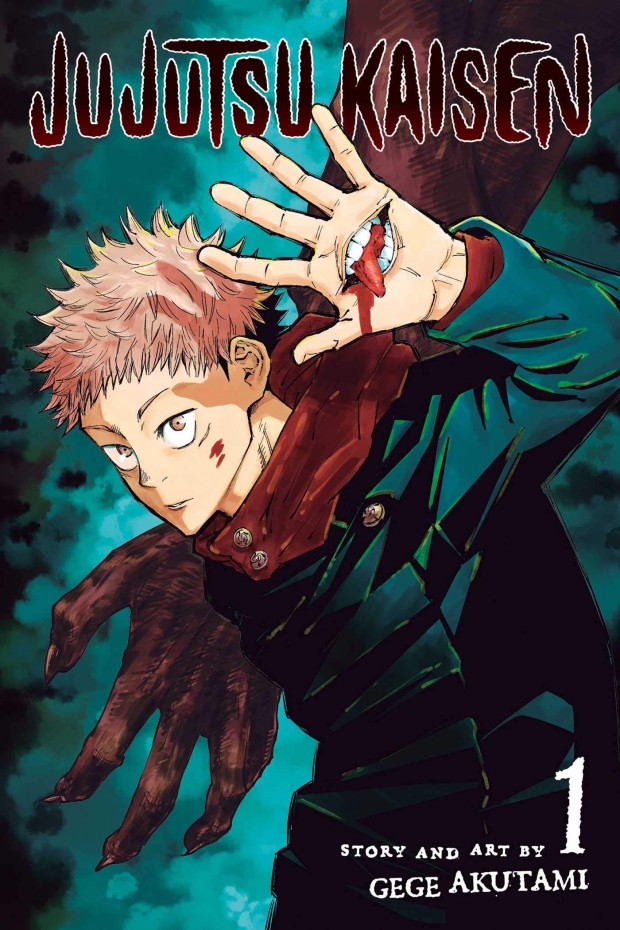 Reading the first volume of Gege Akutami’s Jujutsu Kaisen is a lot like listening to the first track of a Fucked Up album. It starts off a bit slow, as it transports you towards a place of normalcy. Suddenly, in the blink of an eye, you’re experiencing a full-throttle and hardcore spectacle that you can’t really put into words. What Akutami has done here is the “Son the Father” of The Chemistry of Common Life that Jujutsu Kaisen hopes to become. Judging by the things it offers, it has the potential of being one hell of a Shonen Jump classic!

Setting the stage for what’s to come, Jujutsu Kaisen places its spotlight on Occult Research Club member Yuji Itadori, an average-looking student who can pack quite the punch. His grandfather passes away, leaving him with a bit of advice: “You’re a strong kid, so help people.” That’s when Megumi, a first-year at Jujutsu High, appears asking if he’s seen a cursed object he’s looking for. Unbeknownst to the two of them, Yuji’s club members are about to break the seal of said object. And it just so happens a demon lurking in the shadows has been waiting for such an opportunity to occur. 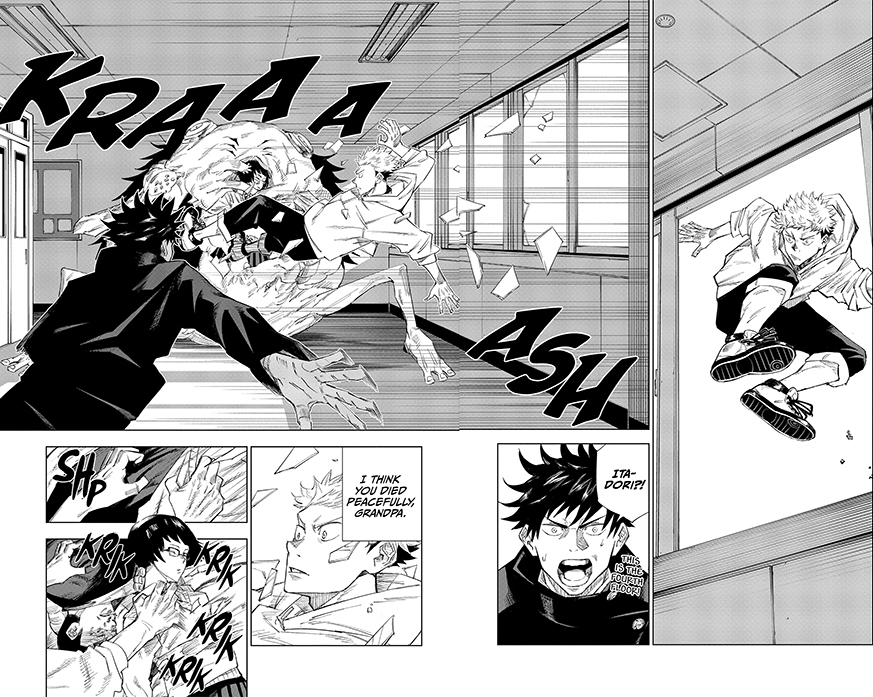 The cursed object winds up being a finger belonging to Ryomen Sukuna, a four-armed demon feared by many who study the occult. Demons who eat his fingers gain world-destroying powers. So like a simple country boy would, Yuji comes up a solution to deal with the demons: he eats the finger himself, thereby gaining control of Ryomen’s powers & abilities. From there, Yuji is dragged to enroll in Jujutsu High to become a Sorcerer, as his goal is to find the rest of Ryomen’s fingers and consume them for the greater good.

Akutami builds up Yuji’s world and situation carefully, as if he’s lining up dominos all over one’s bedroom. Once Yuji gulps down a finger, that’s when the author flicks the first one into action, resulting in a mesmerizing battle against demons and the like. At first, it would appear that Jujutsu High teacher Gojo would snuff out Yuji as soon as he got wind of what he’s done. But just like most shonen manga, our protagonist is a once-in-a-thousand-years special case. (Yes, I’m sure most of us are tired of this cliché.) Thankfully, Jujutsu Kaisen has a lot going for it that’ll keep even the harshest of critics from rolling their eyes. 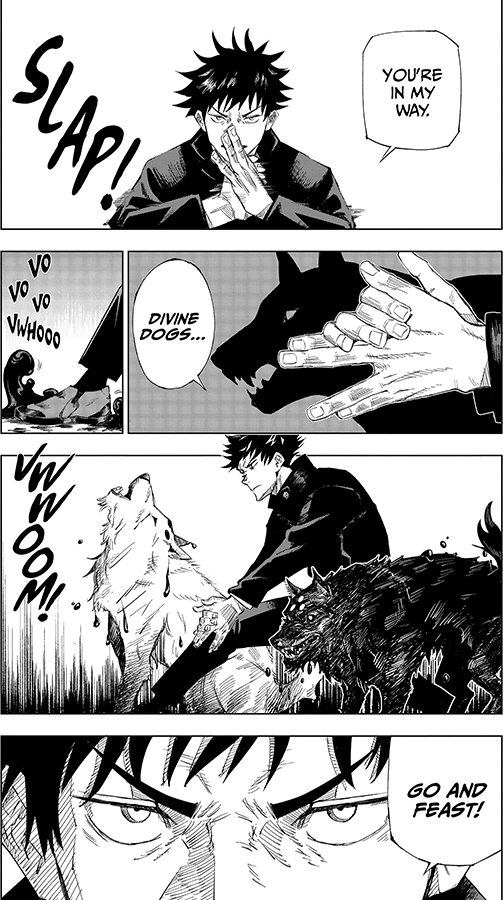 For one thing, it has a very strong funny bone to keep the grim stuff from overtaking the narrative. From a shot put contest with a teacher to a high school initiation battle with a stuffed animal, the antics that are thrown in here and there are both entertaining and deliver some healthy laughs. The addition of Nobara Kugisaki to the Jujutsu Sorcerers crew also manages to give way to some great humor, especially when it comes to her self-indulging mindset. But it’s when the action picks up when readers will certainly start paying attention.

The first couple of demon battles may not last entire chapter lengths, but they manage to find a way to grab hold of their audience. Mannequin-controlling anomalies and mantis-eyed fuzzball creatures have their moment in the sun, as you see the Sorcerers fight them tooth and (literally) nail. Its two-parter “Fearsome Womb” is when the first set of cards are laid out on the table, as Yuji starts to realize the true dangers of battling these horrifying foes. All of this is captured in Akutami’s art style, which goes between light-hearted fluff and the visually disturbing. 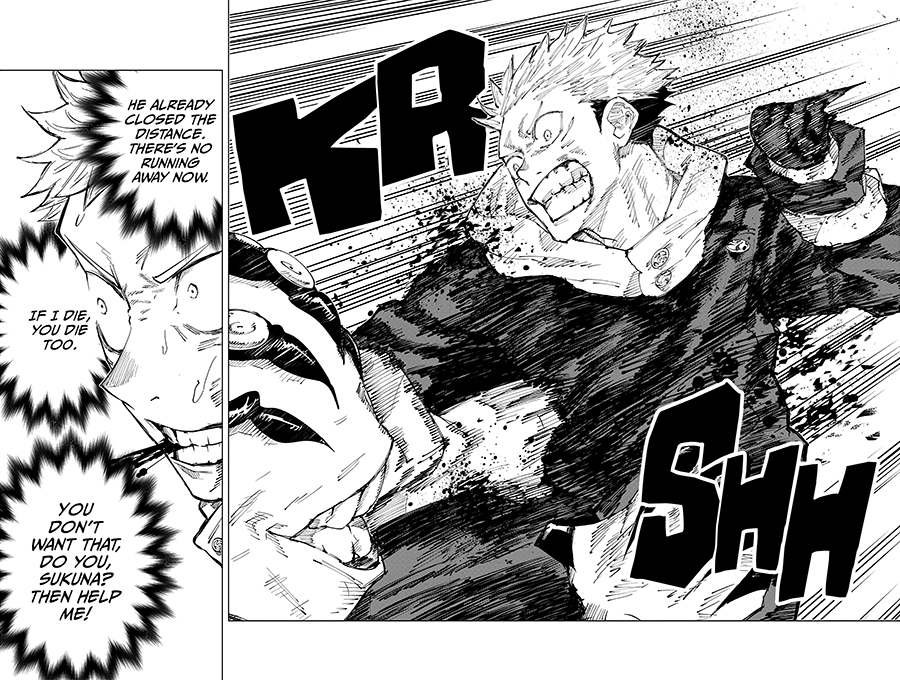 Ending things on a cliffhanger, the first volume of Jujutsu Kaisen manages to keep its readers from losing any focus. It’s not afraid to up its gore factor for the sake of the young ones, nor does it want to try and shove too much exposition into anyone’s face. Instead, Akutami crafts a solid introduction to the world of Jujutsu Kaisen, as it leaves its readers with a heaping dose of anticipation for what’s to come next. Needless to say, you won’t have to swallow demon fingers to feel the power this manga is raring to unleash!

3 months ago No Comments