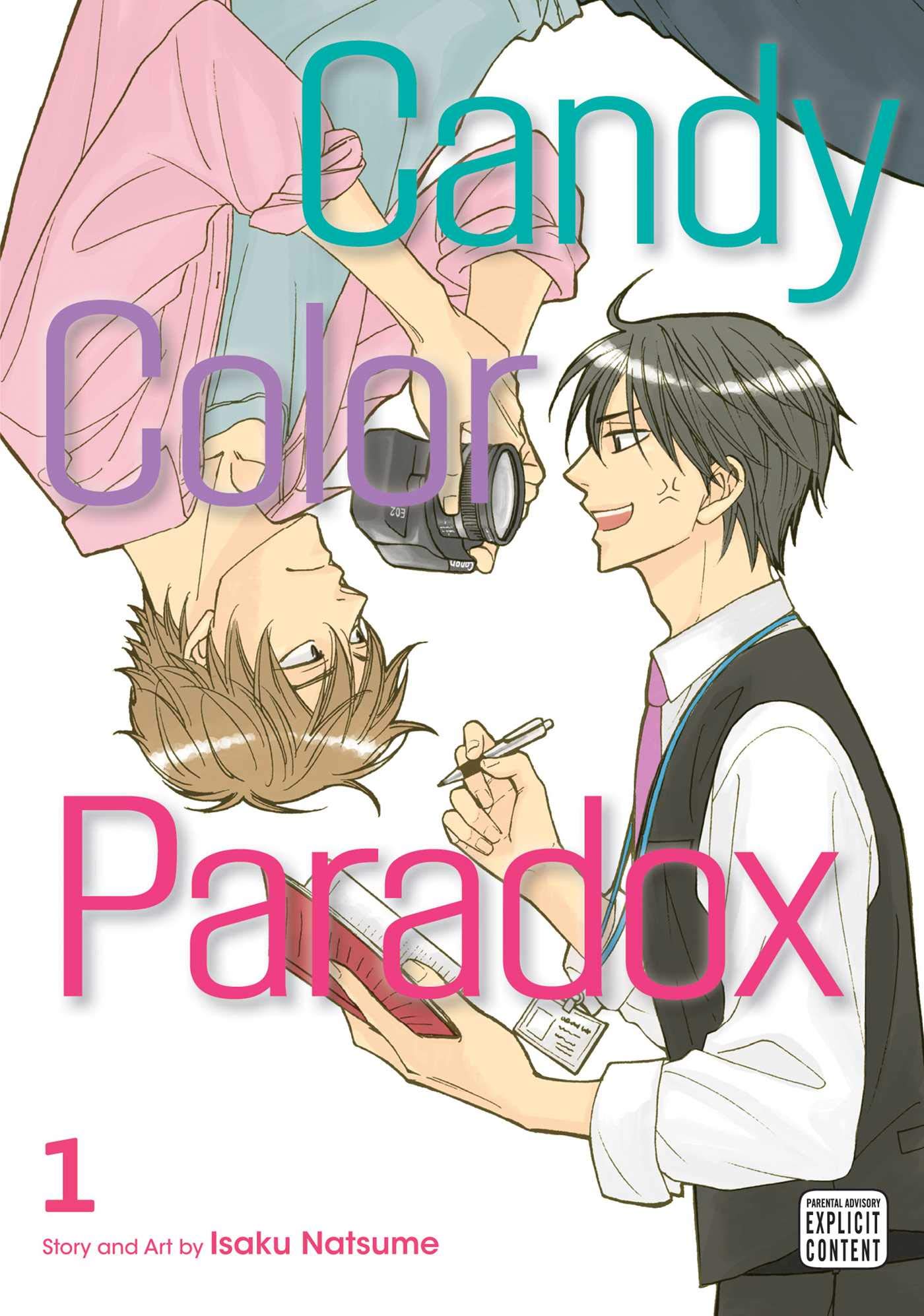 WARNING: While the following article is safe-for-work, the manga discussed is unsuitable for readers under the age of 18.

It truly was a treat to get my hands on Candy Color Paradox by Isaku Natsume, a mangaka I hold in very high regard. I truly appreciate those artists and storytellers who consistently deliver cute and fluffy romance. The 18+ part of yaoi is nice and all, but it's the butterflies I get from watching two lovebirds find their way to each other that draws me in every single time. Candy Color Paradox is a far cry above the average yaoi manga in this respect, and especially so the yaoi manga that are lucky enough to receive an anime adaptation. So many pages left me beaming with secondhand cuteness, and I am grateful for the opportunity to share this yaoi with you.

Candy Color Paradox follows the romance of Satoshi Onoe and Motoharu Kaburagi. Onoe is a skilled journalist who is driven by his desire to expose corruption, and he's paired up with Kaburagi, a photographer who used to feel that way but has turned a bit cynical and is now mostly in it for the money. Their personalities clash at first, but it's fun watching Onoe learn from Kaburagi's ability to slide into a persona for the sake of getting a scoop, and vice versa on learning restraint when employing such abilities. The miscommunication between them was a tiny bit melodramatic, but thankfully these instances were few and far between. Their romance felt natural, as it was grown in a place of mutual professional respect, nurtured on empathy for one another, and made vibrant by their dedication. I love romances where I can root for the main characters, and simply put this was one of those times.

A moment that stood out to me near the beginning is when Onoe and Kaburagi do a stakeout together. Since their journalistic styles are so different, Kaburagi initially pushed Onoe away due to his inexperience, even saying that Onoe is holding him back. Onoe doesn't let it keep him down too long though, because they soon after went on another stakeout and Onoe noticed that Kaburagi had acquired copies of articles that he had written. From this stakeout Onoe recognizes one of the men in the photos that Kaburagi had taken, a member of a Yakuza group that Onoe had covered a year previously. This changed their initial scoop and raised the stakes. They do one more stakeout, and this time they are working together as equals. Kaburagi takes the photo, Onoe writes the story, and the rest is history.

One of the bits of miscommunication I'd like to highlight is near the end when Onoe takes Kaburagi to his favorite bar. At one point Kaburagi steps away and when he comes back he notices that Onoe is chatting animatedly with the bartender, and Kaburagi gets jealous. This is already a bad enough setup in my opinion, but when Onoe finds out that he's jealous he leverages it to just kind of mess with him. This leads to a funky feeling in the flow of the manga, especially since their romance seemed to be going pretty smoothly. Again, this was not a frequent occurrence but it did stand out in stark contrast to the rest of the manga.

As for the 18+ content in this manga, it is actually a small sliver of the entirety of the volume and it's pretty much alllllll the way at the end. I don't mind if yaoi does or doesn't have 18+ scenes, but it feels right that for Candy Color Paradox it is done this way. I care more about the journey of Onoe and Kaburagi's relationship, and it's thanks to the time spent cultivating that chemistry. Overall the art in the manga is consistent from start to end, but it's definitely not as visually stunning or detailed as other trendy yaoi manga. That's okay, because I know that when I see Isaku Natsume's art and name on a yaoi that I can trust the quality of the story, almost without a doubt. A previous work by Natsume, Tight Rope, did receive two episodes of an OVA but it's been crickets since then. I'm hopeful this gives Candy Color Paradox a chance at it's own anime some day, so for totally selfish reasons you should buy a copy so my dream can be realized!

Candy Color Paradox is one of those rare yaoi treasures that you have to capture the moment you see it. My minor misgivings about some of the plot beats aside, it's a strong start to what will hopefully be an amazing series. I can't wait to see all the journalistic hijinks these two will get up to!