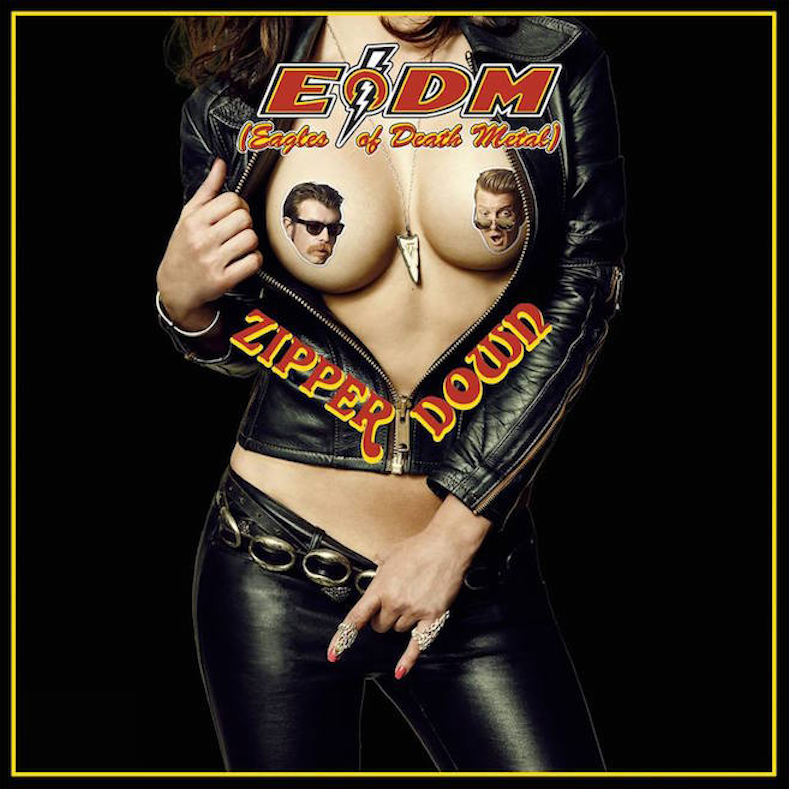 It's always apparent that Eagles of Death Metal, a duo comprised of Jesse "Boots Electric" Hughes and Queens of the Stone Age frontman Joshua "Baby Duck" Homme, are about having fun on their albums. Filled with simple yet irresistible guitar riffs and hilariously kinky lyrics the leaders of the Best Friends Forever Club can get any sort of sexy dance party going just with a mere pluck of a string. Zipper Down, the band's fourth album, continues with that lusty tradition.

If there's an award for most booty-shaking track of the year, it'd belong to "Silverlake (King Shit of Fuck Mountain)," which has Boots flaunt and strut his way unsuccessfully into a hot club, ending with an identity crisis as Hughes shouts "I don't know who I am." He, of course, gets the last laugh with the sultry "Skin Tight Boogie," a duet with his wife (and former porn star) Tuesday Cross that flaunts the the couple's sexiness and domination of the world they traverse in. "Got A Woman" has the band time warping to the era of hand jives and poodle skirts, whereas "Got the Power" quantum leaps its way into the funkadelic realm whilst stealing some key piano rock ingredients from Elton John and Jerry Lee Lewis.

It's interesting to note that three of the songs on Zipper Down are remakes of tracks from Boots's solo album Honkey Kong, and deciding whether or not the new versions are better will depend on your musical mood at the moment. "Complexity," which serves as the album opener, still has a dance vibe, but with more face-melting guitar solos. "I Love You All The Time," the love-iest of the dove-iest track on the album, lacks of the ironically hipster vibe of the original, which may be a plus for some. It's "Oh Girl" that doesn't seem to peer away from the shadow of its predecessor, as the stripped-down newer version is lacking of that spicy sauce that made the Honkey Kong version more savory.

While it may not be their most hot and heavy album to date (an honor more appropriate for 2006's Death By Sexy) Zipper Down acts as a much better, sweatier alternative to all the shitty pop love songs that currently strangle the Top 40 list. Eagles of Death Metal know how to play dirty, but in their own way they know how to treat their listeners right. After one listen to Zipper Down you'll wanna know how to reach the edge of their glory, as well as find out where your pants went.