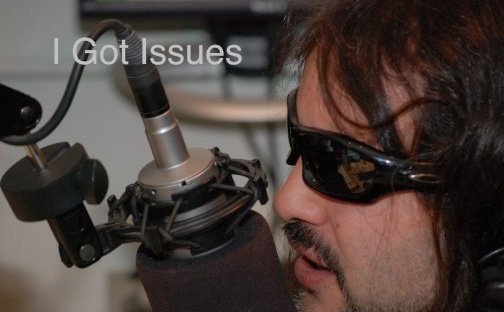 After almost a year-and-a-half of waiting, our buddies from The Issues Program have finally gone live with their own Land of ESH page!

I've known Issues Guy since my days over at Salem State. Back then he was one of the talented folks in my TV Production class, bringing forth a sort of creative energy that was like a strong blend of Frank Zappa and Wayne Coyne. During our time there the characters he would play were unlike anything I've ever seen, whether it was your enthusiastic morning talk show host, or Jesus Christ conducting an interview program. The latter still leaves me in stitches every time it comes to mind, especially thinking of the outtakes.

About a year or so after I started over at WMWM Salem Issues Guy started to do his own talk show, where he and his friend JC Riley would take over the airwaves and talk about the irks of the world. The energy! The snappy comebacks! The utter brilliance these two had together was a sort of force that could not to be reckoned with, as if I was hearing Howard Stern and Stuttering John at their prime.

I had left WMWM Salem back in May of 2010, but the Issues Program continued onwards throughout the college radio airwaves. Almost a year later -- after the ElectricSistaHood was looking to add a new show or two to its lineup -- I brought it up to Issues Guy to see if he would be interested in joining us. Almost immediately he said yes, and proceeded to record a demo show right then and there. Both NinJaSistah and Pandalicious took a listen, and heard exactly what I was hearing: a lightning bolt of off-the-kilter hilarity and on-par talking points that would make any pundit's jaw drop. It was The Daily Show, only on a cocktail of adrenaline and coke!

We've had Issues Guy and JC Riley on our program many a time, and every moment they've been on had been nothing but pure gold. Their program -- along with The Later Show and the brilliantly-titled Brunch With Dicks -- are filled with some of the smartest, funniest, and shockingly informative moments you'll ever hear on your computer, your video streaming site, and on your iPod. Now, after a long (and increasingly patient) wait, The Issues Program finally has their home built. I am stoked that we at ElectricSistaHood are bringing The Issues Program to your earlobes, and I'm ever-so proud to be able to call them our friends.

Go check out their site right now, and be prepared for the laughs that Issues Guy, JC Riley, and the rest of the IP crew will be offering!

Episode CLXXVII: Abracadabra, My A...