Only "Juan" Can Stop The Undead... 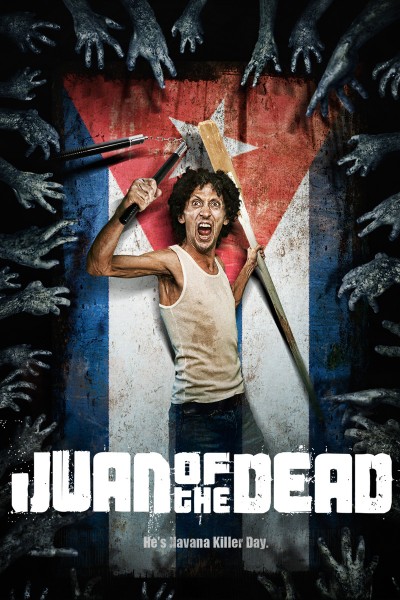 ¡Hola! ¿Cómo estás? Aw, screw it! I don't know how to speak much Spanish, but I can certainly say that this movie is freakin' hilarious. Juan of the Dead pays homage to Edgar Wright's Shaun of the Dead, but doesn't completely copy it out right. Juan of the Dead gives you a whole different story and characters that makes it unique in its own way, especially seeing through the eyes of a Cuban.

Juan (Alexis Díaz de Villegas) is kind of a slacker, but will work hard when stuff needs to get done. In the trailer you see him in this crappy little boat that's basically being held together by rope and buoys. His sidekick Lazaro (Jorge Molina) is just as lazy as him, and has a deatbeat son named California (Andros Perugorría). Juan's motto is more or less along the lines of dealing with all the revolutions and every thing that has happened to Cuba, as he will still be there through this situation.

Before the zombies come out and start doing the serious damage, they show Juan being a nice guy who will help out his neighbors for small cash. However he's also a tad mischievous, as his wife leaves him that he cares about, but then jumps down to the next level of the complex he lives at to have "relations" with one of the women that lives there. He seems kind of lazy, especially since he likes to just lay in his raft when he's suppose to be fishing, while his sidekick does all the work. Juan does have his daughter that he tries to see at the mother-in-law's house as much as he can.

Juan seems to be a little philosopher, who has this ethos about how he survived all this time in Cuba. This is when it starts to get interesting because he talks about the revolution and everything else that he's been involved in. The zombie apocalypse soon comes into play, and yet again he said he will survive it. He soon forms a Left 4 Dead-like group consisting of Juan, his Lazaro, California, a transgendered person, and a really big guy. 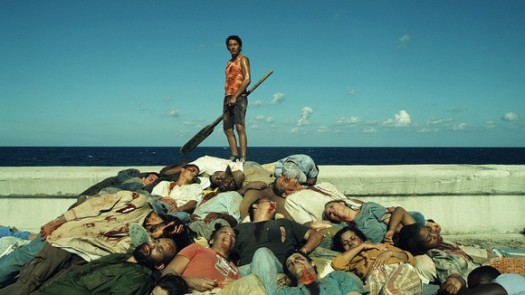 The big guy and the transgendered person work together, as the big guy passes out every time he sees blood. You will see his character with a blindfold, and it is hilarious because the transgendered person is telling him where the zombies are so he can break them in two. What seems to keep happening with the sidekick is he keeps killing people with the harpoon launcher, which is pretty funny with in itself. California has a thing about killing zombies and not messing up his wardrobe. All the characters in Juan of the Dead are unique in every way possible.

Although this movie is paying homage to Shaun of the Dead, it seems to fall short on a couple things. I know that when you're making a movie you can't put everything you record into it; you want just enough to make sure it doesn't take away from the story. This is why I think with the DVD/Blu-Ray releases they should be able to put together the official director's cut, or -- more or less -- the original idea of the movie and what path they wanted to go. With recent movies I can see that there would be something that was skipped, but yet If I saw what was taken out maybe it could've made the film funnier. 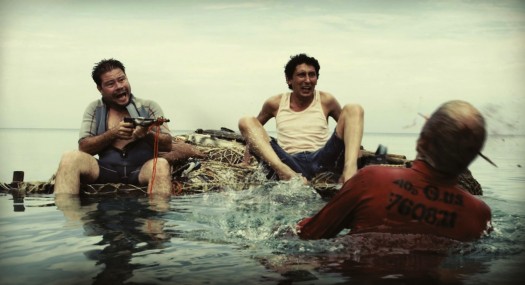 Juan of the Dead is not for everyone. I really wish they could do an English dub so I don't have to read the bloody subtitles. This movie is great to watch it from a Cubano point of view, because he makes fun of the "American Capitalists" a bunch of times in his philosophy of life. If you're willing to sit and watch a movie that's close to a Spanish rendition of Shaun of the Dead, or even just like a zombie flick that has some gruesome scenes, then Juan of the Dead might just be for you!