HomeVideo Games"Ni no Kuni" Dazzles In The Namco Bandai Booth

"Ni no Kuni" Dazzles In The Namco Bandai Booth

"Ni no Kuni" Dazzles In The Namco Bandai Booth 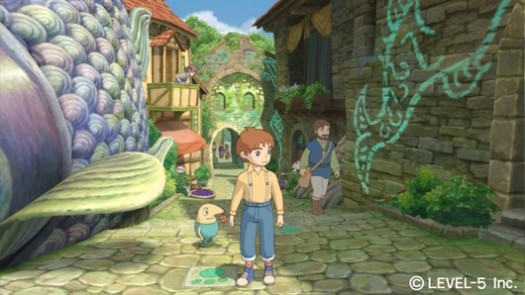 The marriage between Level-5 and Studio Ghibli is like heaven, and Namco Bandai are the travel agency that is sending it on its American honeymoon. Ni no Kuni: Wrath of the White Witch is one title that will have gamers and anime fans alike cheering on their feet, and those who went hands-on with it at E3 will understand why.
For the E3 demo I had the chance to check out two areas. The first was a small town with a cat for a king. Here I was not able to do too much, but after I discovered a hidden sewer entrance I began testing out its battle systems by fighting against many of the creatures that lived within it. At first I thought it was going to be turn-based, only to discover that the RPG system was similar to that of the Tales series. You can do usual attacks, cast spells, and even replenish yourself during battle. In the second area I was able to play, the kingdom of Hamlet was filled with swine people. We demanded to talk with the prince, which lead to us having to battle it out against a pig-based tank aptly named Porco Grosso.

The game looks exactly like watching a Studio Ghibli film, where everything was bright, vivid, and filled with a warmth that no other studio has even come close to capturing. Also on par was its English voice acting, which could be mistaken for one of the better Disney dubs. The one small flaw I had with the game was it's control scheme. It's not bad, but I found myself hitting the wrong buttons one too many times during battle, costing precious life and goods in the long run. Of course it's a system I'll have to get used to, so hopefully with more time with the game these mistakes won't happen so much.

With a release date for January 22 exclusively on PS3 in the states you can bet that RPG gamers and Ghibli fans across the country will be clamoring to finally play Ni no Kuni: Wrath Of The White Witch. Our patience will be rewarded, however, as all the DLC that came out in Japan will be in the game when you first purchase it. In a few months we will finally be able to go on this journey that Level-5 and Studio Ghibli have created for us, and we will be able to feel what true video game magic is all about.

No Borders No Race: Episode Jū-Ni

Disney's Mascot Looking To Re...