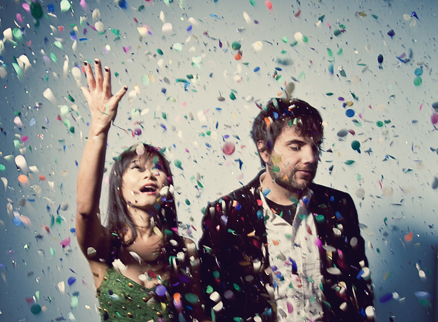 Without a doubt Asobi Seksu is one of indie rock's best and brightest bands in the business. Formed by vocalist/keyboardist Yuki Chikudate and guitarist/vocalist  James Hanna in 2001 the duo -- along with various bassists and drummers -- have been creating sounds and melodies unlike any other group in the last ten years. This year marks the release of their fifth studio album Fluorescence, released on February 15 by Polyvinyl Records, and they start their US tour tomorrow at the Brighton Music Hall in Allston, MA. Via email I had the chance to ask James Hanna about the band's illustrious career.

King Baby Duck: 2011 marks your tenth-year anniversary together, where you and Yuki first became friends and bandmates while at the Manhattan School of Music. What are some of the things about you both personally and band-wise that have evolved during these ten years, and during this time what is it that you’re still learning about as the days go on?

James Hanna: It's crazy that Yuki and I have been making music together for that long. Hopefully we keep challenging ourselves to try new stuff and take risks. Most importantly we are learning to make music that first and foremost makes us happy

KBD: It was either you or Yuki that mentioned in an earlier interview that you both have been looking for more “breathing room” in regards to the songwriting process. Has there been any success in that regards, and if so what sort of new boundaries were you able to push?

JH: No rules, we just bang around in the rehearsal space until we come up with something that we can't get out of our heads.

KBD: In ’09, along with Hush you released the acoustic album Rewolf. Did recording this also help to discover new things about your music?

JH: Sure, we opened up a lot to new textures, not just relying on power and energy to make the songs work.

KBD: You released your fifth studio album Fluorescence on February 14th. How do you think this album differs from your previous recordings?

JH: Hopefully it sounds like us but doesn't sound anything like the last one. We kinda decide to change it up with each album, it seems like that really irritates some people!

KBD: This is the third time you two have worked with Chris Zane as album producer. What sort of influence does he bring to you two that make you want to keep on working with him? How as a producer does he help create the type of music you two want to bring to life on your album, specifically on Fluorescence?

JH: We wanted everything to be blinding and feel like it was jumping out of the speakers. Like taking ecstasy and staring at a fluorescent light bulb for 5 hours.

JH: No not this time, our drummer Larry is absolutely great on this record. We may let Yuki out of her cage to play the drums live though. 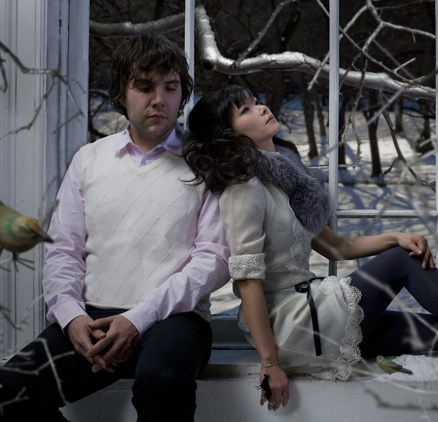 KBD: What do you think is the overall theme of Fluorescence?

JH: Bright punchy synths with washy guitars and Yuki floating like a delicate butterfly above!

KBD: You are currently preparing for your next tour. What parts of America and Europe are you looking forward to returning to?

JH: Who knows, sometimes your sold out LA show is a bummer and 50 people in Memphis is amazing...no expectations!!!

KBD: What is your ultimate goal for Asobi Seksu in 2011, and how do you plan on accomplishing it?

KBD: And finally, if you were stuck on a deserted island, and you managed to pull a Gilligan’s Island and build a record player out of coconuts and vines, which three albums would you like to have with you while you’re waiting to be rescued?

Kinda scary that this list was pretty much the same 20 years ago!

My thanks to James Hanna for taking time off his busy schedule to answer these questions, along with Ashley Ayers of Tell All Your Friends for setting it up. Fluorescence is now available in stores, iTunes and any other place that sells music. For Asobi Seksu tour dates visit their Polyvinyl page to see the entire list.

Episode LXXXV: We Gotta Go Back In...