HomeMoviesHypnosis Caused By "The Fourth Kind"

This is one of those movies that is supposedly based on a true story. Although I wish I could say this movie looked true it seems that it was a fact/fiction mixture thing. The concept that they are going to try to get through to you is that there's actual video footage from the real incidents, but then spliced in with the video footage they recreated. The issue "watching" what was going on was that you could only hear the audio aspect, since a lot of the video was getting screwed up. The other funny thing is that they blank out the real main characters' faces that are in the trailer, but when you watch the movie you can actually see the person (Dr. Abigale Tyler). However the "real" Abigale Tyler is played by another actress (Charlotte Milliard), with the actual video footage of the doctor only shown talking at the end.

The Fourth Kind starts off with the beautiful Milla Jovovich saying that the movie you're about to see has real footage. They also say they had to recreate some of the footage because they were trying to protect the real people from the original footage, so it's really hard to say when it is the actual archive footage or when it isn't.

The film takes place in Nome, Alaska. Apparently the F.B.I. has taken a look at this place about 2000 times, due in part to all the missing people reports and murders. The Fourth Kind takes the archived videos and places it against the actor's video recreation, which is crazy how spot-on they were with making the same movements and speech. This poor fucker above gets put under hypnosis and explains what he has been seeing at night in his subconscious. Fisher explains about this owl that looks in on him, saying that the door then opens and he is attacked. The moment makes Fisher scream and flip out. When he awakes he leaves, feeling freaked out. (This guy's family suffers the consequences of this.)

The way they show the Fisher family murder scene is a standoff (see picture above) where he's on the phone with the police and Dr. Abby, who try to tell him what happened in his dream wasn't real. He doesn't believe them, so he kills his wife and son. His final words goes along the lines of, "They aren't going to bother me anymore," shooting his wife, kid and then himself. As you can see that they set up the real video at the bottom of the screen, then the rest were the film's recreations. They did blank out where Fisher shot his wife in the real video, but when you go to the DVD extras they show everything (though it's hard to tell due to the crappy resolution of the police cam).

Will Patton (as Sheriff August)

The town sheriff August is played by another amazing actor: Will Patton, who was in another movie that seemed to give people the creeps (The Mothman Prophecies). Although they didn't really give a description of how the actual sheriff acted, Will Patton always does a great job portraying him. (I wish I could see him in more movies.) Sheriff August is portrayed as a douchebag with his head stuffed up his ass, where he seems to be headstrong on the fact that people are dying. 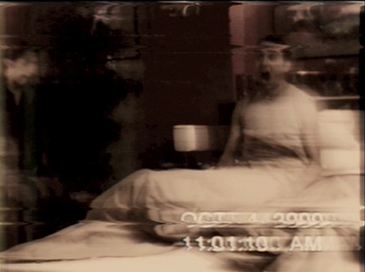 The picture I have provided you with above is where they put one of the other people who've been talking about the owl under hypnosis. He wakes up in a scream, creating a distortion from the aliens that are talking through him. (They talk in ancient Sumerian, if you were wondering.) After he stop floating off the bed, the guy suffers a broken neck and becomes a quadriplegic. (Now that would be hard to explain why you ended up in the wheel chair. It's not saying you were in an accident of sorts. No, this poor fucker has to say that something took over his body so hard that it broke his freakin' neck.)

Dr. Abbey then has her child taken away, so she goes to the extreme of putting herself under. The video gets screwed up once again, and you can only see certain things (i.e.: moving back and forth as if she's having a conversation, screaming loudly at the aliens). The alien thing apparently has a God complex as well, as you can see what was translated from the aftermath in the audio. (I wonder, though, if today's cameras would have messed up as much, seeing that have such great visual qualities.)

After she is done screaming her face looks like a mac truck just rammed into it. (Me wanting to be a jerk would've asked, "Why the long face?") So more or less she just got her jaw unhinged by the damn alien bastards. Something weird goes on when they get close to her, like some sort of static comes in her mouth. All of a sudden the camera flips over and they suddenly disappear, a scary thought within the idea of getting some alien that likes to do some weird probing on you; it just doesn't sound like a good time to me. All in all this movie is pretty good in my book, but if you're at home and watching this in the dark it will most likely mess with your mind. I suggest getting your girlfriend or boyfriend to watch it with you, as it seems like it's a good reason to claw in to each other when you're afraid.

Episode LXIV: Knockin' Over B...