There are many moments in American Repertory Theater's production of Cabaret that made it an experience unlike no other. From its pre-show shenanigans and its stellar cast (led by Dresden Doll Amanda Palmer, playing the androgynous Emcee) to the audience participation and the beautiful costumes this adaptation of the Joe Masteroff/John Kander/Fred Ebb musical knew how to raise eyebrows and create certain moods that I've yet to bear witness to until this night.

Sitting in the OBERON the atmosphere was that of what the Kit Kat Klub could have been like, where scantly-clad women and men frolicked with the audience, danced in the aisles and played drinking games with the club patrons. Finally the show began, and with little to no shame Palmer and the A.R.T. re-imagined the classic musical into a theatrical event that is needed in times like these. The characters of Sally Bowles and Cliff Bradshaw (played by Aly Trasher and Matt Wood, respectively) brought a sort of real-life passion and drama that shone brightly throughout the theater, but no actor stole the spotlight more than Thomas Derrah, whose portrayal of Fraulein Schneider at first reminded me a bit of Nathan Lane's role in The Birdcage, only to have it quickly turn around to make it one of the most dramatically brilliant pieces of acting this year. (Expect a lot of great things from Derrah in the near future, including a Tony win.)

Of course we cannot talk about the acting without mentioning Palmer's portrayal of the Emcee. Instead of borrowing from past performers like Joel Grey or Alan Cumming, Palmer made the character her own and her vocal range was perfect for the role. Her rendition of "Willkommen" will draw you in, but it's her performance of "I Don't Care Much" in the second act that will leave your eyes wide and your lungs breathless. On top of it all is her body language and dancing skills with the ensemble, who add a pinch of Cirque Du Soleil to their demeanor and movement. (You can thank Steven Mitchell Wright for his brilliant choreography techniques for that one.)

The usage of Stephen Bogart as a director was a bold move, as his directing chops were only seen within the auditorium of Lexington High School and a couple competitions. Give Palmer credit for bringing him on, as his stage direction was spot-on in every aspect of Cabaret. The way the actors walk into the light in the beginning -- as if the ghosts of the Kit Kat Klub were being revived for our viewing pleasure -- was awe-inspiring, and it created the right amount of tension that audience members will feel slowly creeping through this beloved story. The way the musical ends (spoiler: not a happy ending), too, will leave you speechless, maybe with even a few tears in the eyes. Here's hoping we'll see more productions with Bogart at the helm.

The story of Cabaret continues to be timeless, and it's thanks to every actor and worker involved in this production that keeps it as strong as it was when it first premiered in 1966. One can still feel the pain and anguish that the people in Berlin felt as the Nazi party slowly grew, as well as feel bad for those who thought that sort of rule would only be a quick phase (especially for Herr Schultz, played wonderfully by Remo Airaldi). The songs were also top-notch, but I couldn't help but notice there were a couple times where the band drowned out Trasher and a couple others during their performances. (This will probably be ironed out as performances go on.) David Israel Reynoso also deserves some credit for his costume designs, which were just the icing on the cake to help set the proper mood and time period of Cabaret; whether it was something as simple as Schneider's dress or colorful as Bowles's Cabaret garb every piece of cloth was sewn together to perfection. In regards to set design there was little to work with, seeing as the OBERON is already set up like a club as is, although intertwining the train sequences and backstage areas of the Kit Kat Klub behind the main stage were put together thoughtfully.

A.R.T. is known for re-inventing the theater experience, from Sleep No More and Don Juan Giovanni to the current production of The Donkey Show. (We can also mention The Onion Cellar, which also starred Palmer and her partner-in-crime Brian Viglione.) Cabaret, however, takes the theater experience, spins it like a top and pulls the audience in whether they like it or not; and from some of the reactions of the audience members they seemed hesitant to play along. They will all learn in good time, and once they do they will embrace this new revolution of theater-going with an open mind and a freer spirit. As the Emcee says: "Leave your troubles outside," and take part in this once-in-a-lifetime theatrical event known as Cabaret. 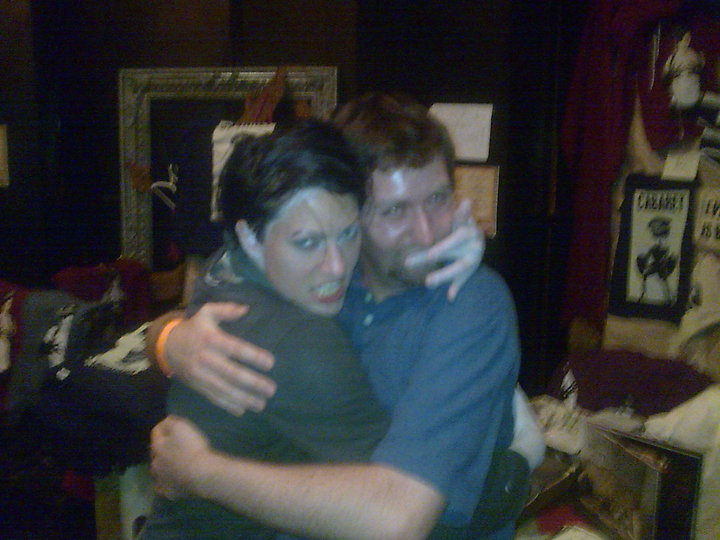 The Emcee & The King

Cabaret is now playing through October 29 at OBERON, located at 2 Arrow Street in Cambridge, MA. Tickets are sold out, but some performances might release tickets on the day of the shows, so I advise you to keep an eye and ear out for available seats. A.R.T.'s Twitter Page is your best bet to get the latest ticket releases first.

Episode LXIII: Afterlife Is A Caba...