"Pilgrim" Finale Is At Its "Finest" 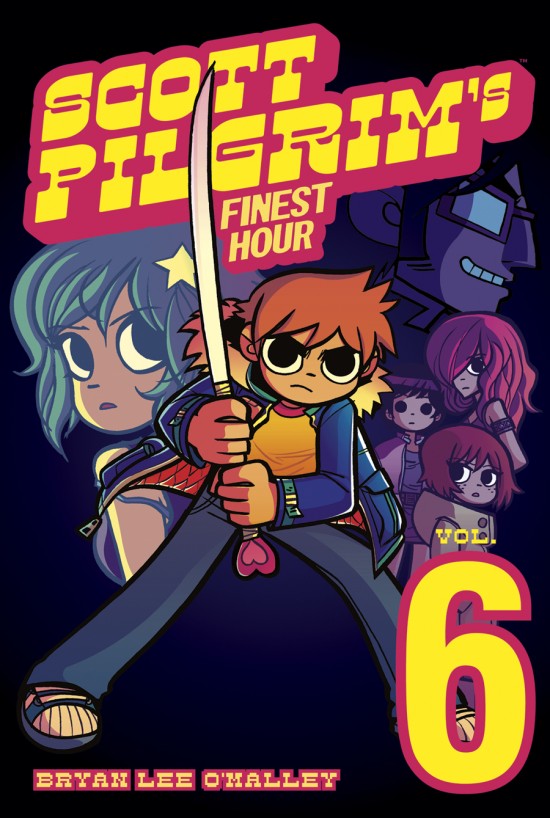 It's sad to see a finely-written series meet their final destination, especially when it's Scott Pilgrim, whose adventures had been filled with video games, rock 'n' roll, ninjas, sexy girls with multi-colored hair and evil ex-boyfriends (and one evil ex-girlfriend). But Brian Lee O'Malley knew that all good things must come to an end, and with the final book Scott Pilgrim's Finest Hour he makes sure to pull out all the stops and push its gigantic fanbase towards the conclusion that everyone was asking for.

It's been four months since Ramona disappeared, and Scott Pilgrim has wasted those four months moping around playing video games. His love is gone, and it seems that any reason to embrace life is all but faded from our hero's mentality. (He's even playing a PSP Go and calling it "the hottest, newest, hottest thing," a sign that he desperately needs therapy.) Everyone else has moved on -- from Stephen Stills forming a new band to Knives Chau getting ready to move away -- but Mr. Pilgrim cannot seem to get out of his phase...until he heads home to clear his head and fight his inner "Negascott." Once he's back to his old self he finds Gideon and battles him for the ultimate final finale. Will Scott triumph, and where is his beloved Ramona? The answers to these questions will be revealed...now. Yes, and out finding herself via the subspace highway.

While my last statement could be considered a spoiler, it's not. We all knew Scott Pilgrim was destined to be with Ramona, but the fun of it all was getting to that point. And, boy, was Finest Hour a fun read. O'Malley is fantastic with bringing together fine comic artwork and witty dialogue, and does it in such a way that you can't help but smile at every panel in this book. (Scott's delusional flashbacks will fill you with hearty chuckles, that's for sure.) What's also amazing is how the series just seems to wrap itself up without feeling rushed or having to skim through unanswered questions. I don't want to spoil anything else about the book -- even though I just told you its ending -- but I advise those that haven't read this series and want to (especially the people who want to see Scott Pilgrim VS The World on August 13) to pick up all six volumes, get a group of friends and read along. The ending does not disappoint at all, and will leave you hoping for one more adventure with Mr. Pilgrim and Ms. Flowers somewhere in this video game called Life.

Now let's cross our fingers and hope the movie kicks lots of ass...