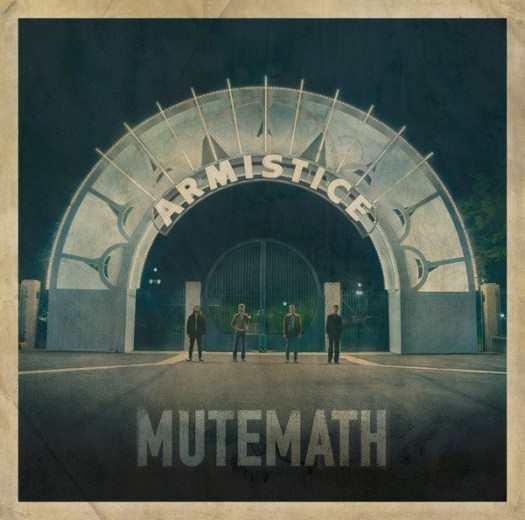 Every successful band runs into it: the sophomore album confrontation. It is here where musicians must face head-on their second release following a critically-acclaimed debut album. Some artists have fallen apart here, whereas others treaded forward triumphantly. For Mutemath and their newest album Armistice, they have fought through victoriously; though not without a couple of battle wounds.

Opening with “The Nerve” Mutemath chase towards Mt. Sophomore Album without any fear, experimenting with dance beats and electronic noises; and follows up with “Backfire,” featuring a drum backing that sounds a bit similar to their previous hit “Typical,” but manages to push away any similarities in the music break. “Spotlight,” first heard in that horrible vampire movie whose name must not be mentioned, sounds ever-so glamorous and new; even after being released since last year. Though both “Pins and Needles” and “No Response” seem to steal from Radiohead’s playbook, Mutemath manages to break through the similarities with the songs’ beautiful lyrics and haunting orchestral pieces. “Electrify” could’ve been a cheesy love song (with the chorus "I’m in love with this girl that’s got my head"), but is instead an exciting romp that will surely be a staple at Mutemath’s live shows. The title track comes in with horns blared and the funk present, and blending this style with the band’s alt. rock sound makes it echo like Stevie Wonder being backed by matt pond PA. (In this case, the end product is the most fun track on the album.) The band saved the best for last, though, with “Burden”: a nine-minute track that showcases the best guitar-playing and drumming the band has ever done; along with a slow interlude that’s both somber and hopeful, ending with a crescendo of loud banging that crashes to a halt.

The album has its blunders, though. “Clipping” comes off too much like a Muse demo that should’ve been left on the cutting room floor; though the violin section is quite beautiful and should’ve been used for another song. “Goodbye,” Mutemath’s attempt to copy U2’s style, is merely a knockoff of Bono and the Edge. It should’ve been released as a bonus track or B-Side, for its presence on the actual album feels out of place. (The album’s bonus track “Valium” should’ve taken its place, thanks in part to its heavy orchestrations that match well with the feel of the actual record.)

Despite these two slip-ups, Mutemath has shown that they’ve come far since their self-titled debut. Being the first album to feature contributions from all four band members, Armistice sounds more evolved than its first record; and its comparisons with the likes of Coldplay and Radiohead can be seen merely as flattery. When talking about the creation of the album, singer/keyboardist Paul Meany told one newspaper, “Our goal is to embarrass the first record...and I think we’re on point to pull it off.” Pull it off, you have, Mutemath.

Episode XLVIII: Back In The Old Da...

Episode XLIX: When Life Throws You...