HomeComics/MangaMANGA REVIEW | "I Am A Cat Barista" - Volume One

MANGA REVIEW | "I Am A Cat Barista" - Volume One 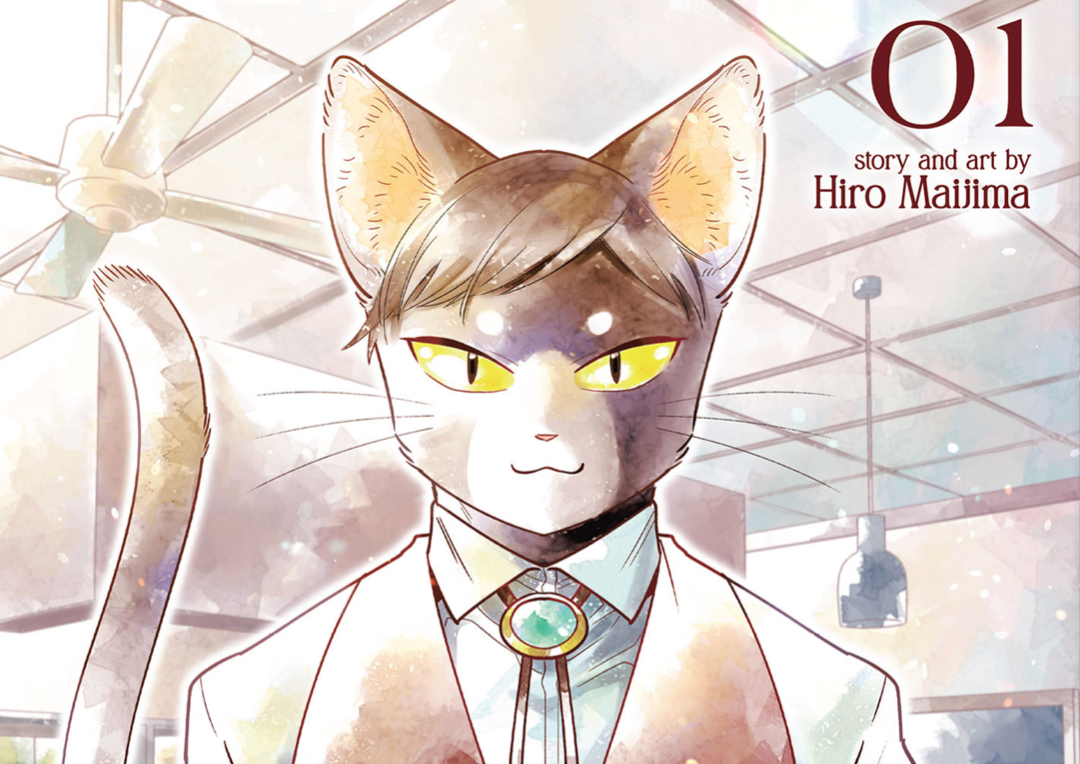 MANGA REVIEW | "I Am A Cat Barista" - Volume One

I’ve never been to a cat cafe, and can’t say the idea of one appeals to me. Who wants cat hair anywhere near their coffee? Not me, no sir. I did, however, have a crush on Baron Humbert von Gikkingen (from The Cat Returns) as a teen, so I wouldn’t be opposed to visiting a cat cafe if an equally gentlemanly feline was dishing out the caffeine.

Thankfully, Hiro Mijima's debut manga, I Am a Cat Barista, is here to vicariously fulfil that very specific fantasy - for better and for worse. While certainly unique in premise, the episodic vignettes the series chooses to tell are anything but. Some readers may be charmed by its simple structure and presentation, but more seasoned readers will find I Am a Cat Barista treads a lot of old ground already journeyed by its contemporaries in better form.

In its entirety, this volume guides readers through short stories following the various patrons of Cafe Hachiware, a mysterious coffee shop that “only the weariest souls can find.” It’s run by Hachi, a sharply-dressed anthropomorphic cat that lends a sympathetic ear and bit of magic to customers going through tough times. These patrons include (but aren’t limited to) an overworked salarywoman, a shy bookworm with a crush, a burnt out junior high student, and a frantic lost pet owner. Each is given a specialty drink and a much needed heart-to-heart, before being sent on their way, refreshed and happier than before. 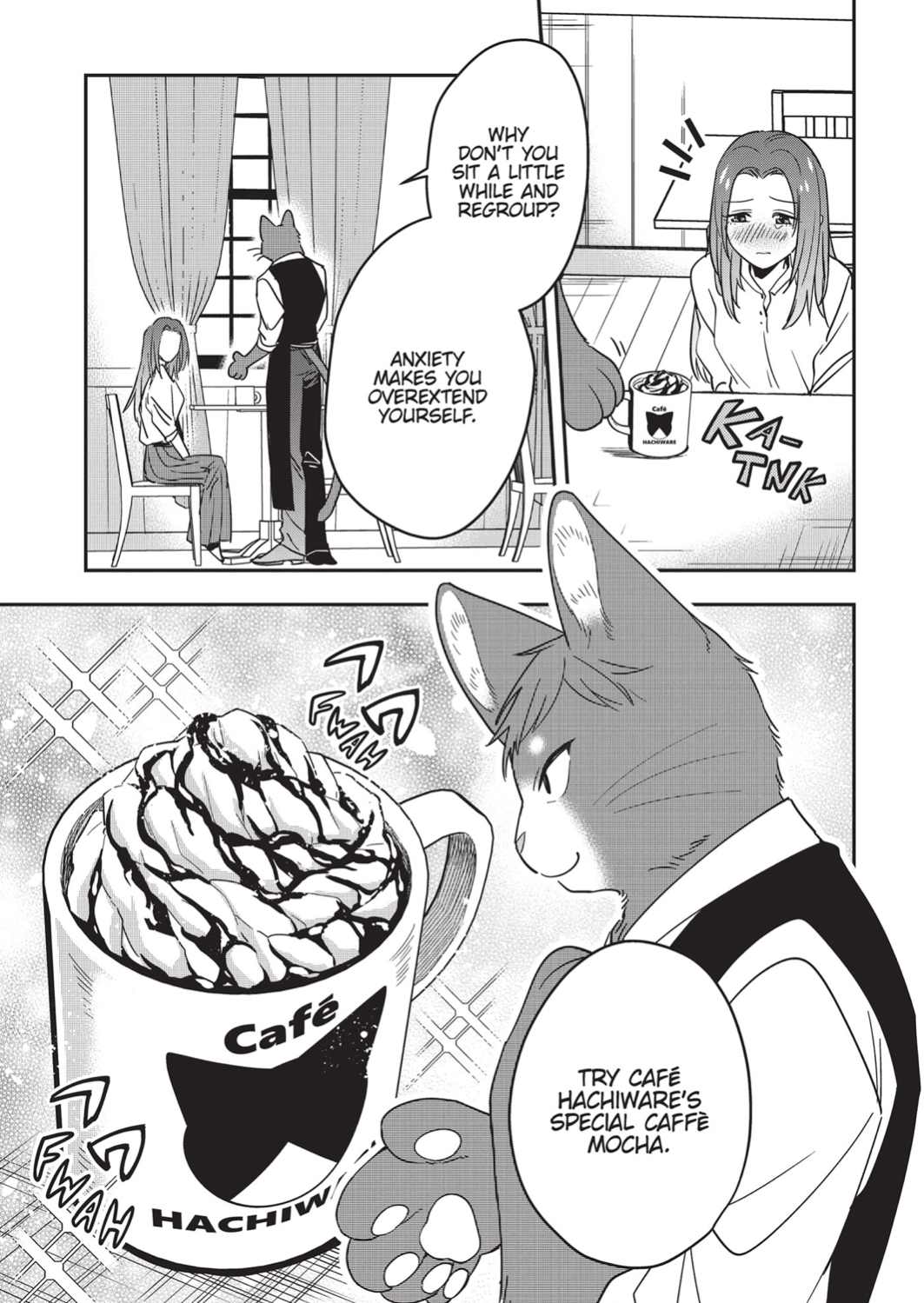 The premise is simple, and its chapters short, but given its release history, that makes a lot of sense.

I Am a Cat Baritsa began as a web manga published on Mijima’s twitter account from August of 2018 to April of 2019. Shortly following its conclusion, the series was collected and released in two physical volumes in Japan. Then, Seven Seas Entertainment picked it up for an English release overseas, and here we are. Knowing it was originally released piecemeal via Twitter leans me toward forgiving much of its incidental nature. I can see each individual chapter being a quick, welcome diversion while scrolling online, but when you compile them all together and read through them all at once, you start to see patterns in how superficial the writing and characters truly are.

If you’ve read any sort of slice-of-life anthology series before, nothing here is going to surprise you. Common messages about valuing leisure time, finding confidence to speak your mind, and embracing what makes you happy are all here and given minimal depth. The conflicts present are bare-bones basic and resolved easily via Hachi’s sage advice and magic. 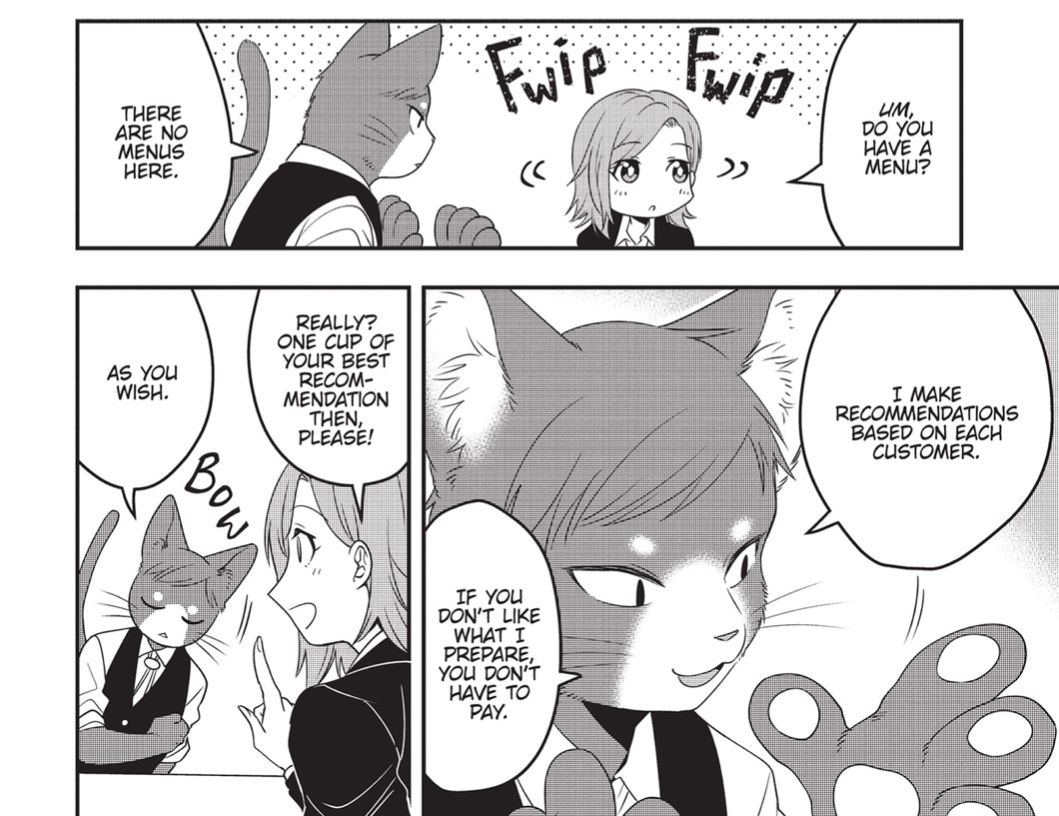 The only interesting character at play is Hachi - who, by nature of being a magic talking cat, gets points for just existing. He’s polite and kind, with a dry sense of humor and top-notch barita skills. Again, due to the short-form nature of its initial conception, there’s little questioning of who he is or how he came to be. He’s just…there, which would be fine - if Mijima kept him and his possible origins fully enigmatic.

At the tail end of the volume, Hachi gets a text from another magic anthropomorphic cat, who runs an actual cat cafe, where there are normal, everyday cats just hanging out, and nothing about this is ever explained. 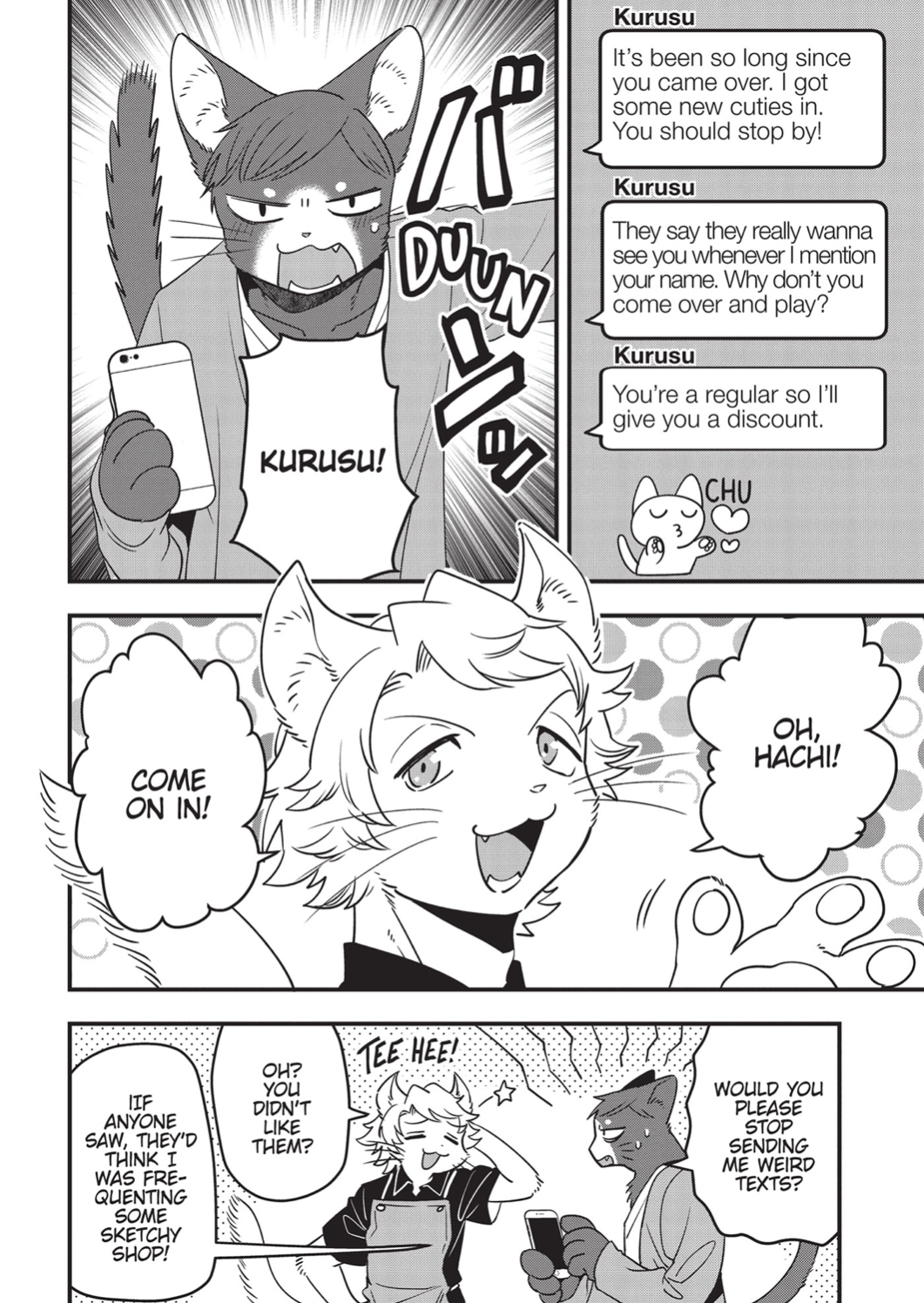 It's made clear in the first chapter that Hachi’s existence is not common in whatever world this takes place in, so the concept of there being an connected community of magic handsome bishie cat furries just vibing outside of everyone’s collective perception is such a far-out plot point, and, honestly, the most interesting thing about this story. It's a genuine shame this all comes out of nowhere in the last few pages, because if this volume had been more about them, and not the milquetoast human patrons of Hachi’s cafe, I would have liked it a heck of a lot more.

Or, at the very least, been able to stay awake through it.

Maybe the follow-up volume will be all about that, maybe not. Time will tell. Until then, I can only recommend I Am a Cat Barista if the very concept proposed by its title is enough to pull you in, because there’s not a lot there to hook anyone otherwise. If you decide to give it a shot, don’t do what I did, and avoid binging it in a single afternoon. Sometimes, creative projects native to an online-only release schedule are best enjoyed that way, and don’t need physical publishing to gain legitimacy, because in the case of this manga, the medium does it no favors.

Tags
I Am A Cat BaristaJenQuestmangareviewsSeven Seas Entertainment
Previous Article