HomeMusicSystem Of A Down & Deftones Bring Down Comcast Center

System Of A Down & Deftones Bring Down Comcast Center

System Of A Down & Deftones Bring Down Comcast Center 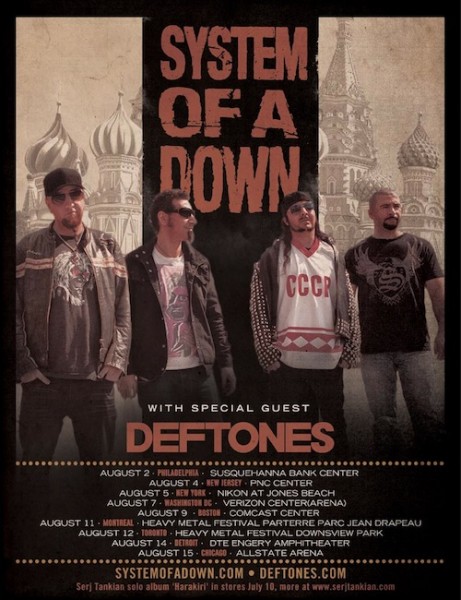 Thanks to King Baby Duck, I probably got the best birthday present I've had in the longest time. System of a Down has been a band that I've wanted to see for the longest time, but since they went on an "indefinite hiatus" I never thought I would've been able to see them live in person. 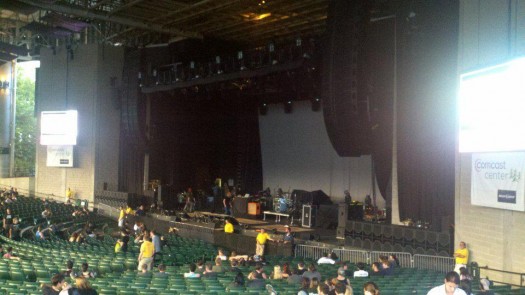 Above is the view we had for our seats

The drive down from our respectful location of Lynn (yea, respectful my ass!) to Mansfield to get to the Comcast Center was a nice stop-and-go hell, as I wondered how much wear and tear I put on the vehicle on the slow drive for 50 miles. One of the other fun issues we dealt with is that the Patriots had their pre-season opener that night, so we can say traffic was on the horrific side on traveling down. Parking was okay going in, but one hell of a "flustercluck" to get out of. Comcast Center's security was, in my opinion, understaffed and unprofessional. They didn't properly search people, and couldn't do so because they can't have people strip to see if they had any like hidden flasks (see video below).

The question I asked myself is why there were only two bands on the set list, but then I realize that it's going to have Deftones and System Of A Down. Deftones rocked the hell out of the Comcast Center, and in fashion they kicked some ass to get the crowd going. They're an absolutely amazing band to see live, as this was the second time I've watched them perform. (The first was at Boston's House of Blues awhile back, and that was also a great show.) Lead singer Chino Moreno stated that they will be releasing a new album sometime this fall. The whole set list for the Deftones really blew everyone away like usual, with the hour-long set mixing new and classic tracks. 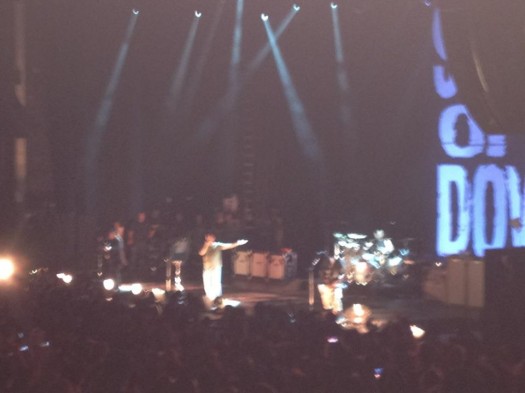 Now for the juicier part of the meal. System of a Down came in with all its glory with a special curtain with their name projected on it. Then you hear the start of "Prison Song," and the curtain dropped as the crowd went absolutely nuts. The set list for System seemed to go on forever, and it just went by like a flash it was that good. The band still seems vamped up, even though they did look a little bit older now. For them to play just like normal and whatnot it seems they haven't missed a beat. It was just amazing to see Serj, Daron, Shavo, and John playing the music that had gotten me through high school and -- of course -- the George W. Bush's years. I'm telling you this now: if you missed this event, then it sucks to be you. This one was probably one of the best concerts I've been to in my life. The whole crowd was singing at the top of their lungs, and dancing around to this all-out madness show. It's the way shows should really be, and it was extremely fun.

I have been wanting to see SOAD since I heard their first album, which was introduced to me by Cousin Teg. Going from the self-titled album and knowing almost all the songs by heart, up to Hypnotize and Mesmerize, it got to the point where I was just happy because it was chock-full of System of a Down goodness. Then they decided to take a break, which scared me into thinking that they were never going to get back together. Serj Tankian has his solo albums, his most recent album being Harakiri. Honestly I'm not sure If I'm pleased with the new album, but I also wondered what the other band members thought about the new album being promoted on the tour. Next to that you have Daron Malakian with his side band Scars on Broadway. To my knowledge they weren't doing much, and from what I read Daron was actually away from the band for a bit while they toured, and is now back recording some song for the new album.

For the venue Comcast Center sucks big time. Its security was crap, and none for nothing the set up is not the best it could be. I'm thinking with all the money they make they could maybe remodel the place. It will be too soon to drive back down there and watch another concert. I'll take the TD Garden and the House of Blues any day.

Deftones were absolutely amazing, probably because I've seen them before I was starstruck by them. With that said I'm always glad to see them in concert. The set up they had on the stage was interesting because Chino had a ramp platform he danced and ran around on. The rest of the setup was normal, but they still got the crowd amped up and ready to go.

System of a Down was everything that I could've expected and much much more. For them coming back to do this tour gives me hope to see an album from them in maybe the next year or two. I know they have been talking about it for a while, but they have been having a hell of a time seeing eye-to-eye on when to start recording. I'm not one that always likes to hope for things, but this shows a bit more promise. I hope they really noticed that the crowd was missing them so much that they need to put aside any petty differences or anything that would stop them from putting another album together. They were perfect on all the songs, the long set flew by, and I enjoyed every moment of it.

Special thanks once again to King Baby Duck for the birthday present!

If I was in the audience, I might've screamed due to the fact this guy whipped something out of his pants to put in a cup.

Episode CL: The Real B Word